Post Office commemorates the centenary since the outbreak of WW1

Posted on 07 November 2014 in Press Releases 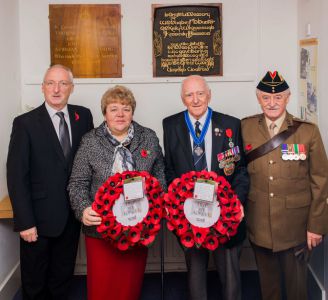 In the centenary year since the outbreak of WW1 the Isle of Man Post Office is inviting members of the public, friends and families of Post Office workers to join them in commemorating the lives of those who fell in service during the two world wars.

On November 9th, Remembrance Sunday, senior Post Office representatives will attend the St. Johns Memorial to lay a remembrance wreath, and on November 11th, Armistice Day, they will again pay their respects at the Douglas Memorial on Central Promenade.

Prior to Remembrance Sunday, key Post Office representatives were joined by Island war veterans, Charles Wilson and Hector Duff, to pay their respects and witness the laying of the wreaths in the Regent Street Douglas Post Office branch.

Indeed, linking with this, Regent Street Post Office displays commemorative plaques for WW1and WW2 Post Office workers who fell during both. The WW1 memorial is an original commemorative plaque designed and created by Archibald Knox. Over the year the Post Office has embarked on a quest to trace the relatives of the six Post Office workers honoured on the plaque. They continue in this quest to gather more information on its wartime history. Anyone with any helpful information concerning the search is invited to come forward with details to Maxine Cannon, general manager of Isle of Man Stamps and Coins.

To mark the centenary of WW1, the Post Office also recently released a set of stamps depicting life in the trenches and a miniature sheet documenting trench art. Both form part of a four year thematic stamp series and were released in support of the Royal British Legion.