The 50th anniversary year of the first manned flight to land on the Moon.

The Isle of Man Post Office presents this landmark issue in the 50th anniversary year of the first manned flight to land on the Moon.

Our sensational stamp issue commemorates the anniversary of the Moon landing, but also all the missions that led up to that one small step. Through our stamps we have sought to show you the beauty of space, the Moon and the vehicles that took humanity to the Moon. Through subtle references and codes on the stamps (and within NASA guidelines) we have included those incredible NASA staff in Mission Control, the astronauts, the programs directors and those who gave their lives. 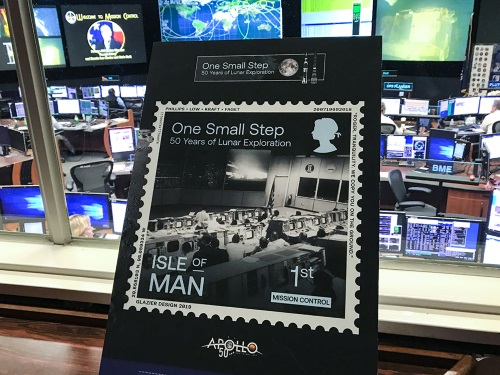 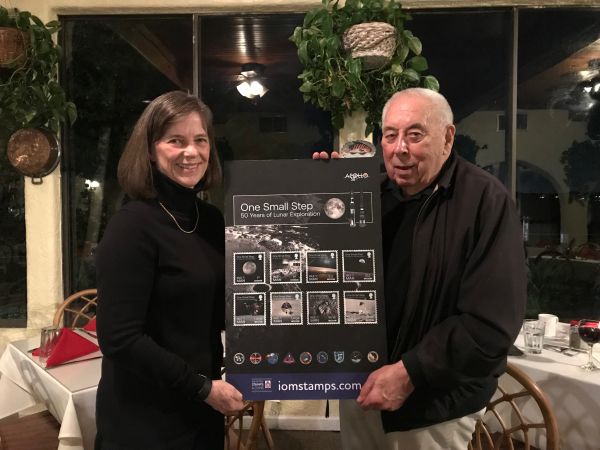 Our eight stamps commemorate man's first step on the moon's surface by Neil Armstrong, Commander of the Apollo 11 mission.

On July 20, 1969, Neil Armstrong, followed by Edwin "Buzz" Aldrin, became the first man to stand on the moon. As Armstrong stepped out of the Apollo 11 lunar module, the Eagle, he spoke the famous words, "That's one small step for man, one giant leap for mankind."

Stamp One
Our first stamp features the Moon, the target of the Apollo missions, as well as the names Kennedy, Webb and Gilruth and the famous quote from President Kennedy: "We choose to go to the moon in this decade."

Stamp Two
Our second stamp features the Apollo Mission Control Room, the names Phillips, Low, Kraft and Faget and the quote: "Roger, Tranquility. We copy you on the ground."

Stamp Three
Our third stamp features a view of Florida from Apollo 7, the crew names Schirra, Eisele and Cunningham and the quote: "Look at the sunrise. There you go. That's the thrill of this business."

Stamp Four
Our fourth stamp features a view from Apollo 8 of the first 'Earthrise' seen by humanity, the crew names Borman, Lovell and Anders and the quote from Genesis: "In the beginning God created the heaven and the Earth."

Stamp Five
Our fifth stamp features a view from Apollo 9 of first manned flight of the lunar module in space, the crew names McDivitt, Scott and Schweickart and the quote: "There's that horizon. Boy, is that pretty!"

Stamp Six
Our sixth stamp features a view from Apollo 10 of the lunar module descending on the dry run rehearsal, the crew names Stafford, Young and Cernan and the quote: "Looking great here. You're looking beautiful."

Stamp Seven
Our seventh stamp features the first footprint made by humanity on a body other than Earth, the crew names Armstrong, Aldrin, Collins and the quote: "That's one small step for man, one giant leap for mankind."

Stamp Eight
Our eighth stamp features a view on the surface of the Moon of equipment from Apollo 12 with survey equipment from a previous unmanned Moon mission, the crew names Conrad, Gordon, Bean and the quote: "We knew it was going to be difficult. We didn't know how difficult."

We are very grateful to all those who have helped us, especially Mr George Abbey who worked with NASA during the Apollo missions and was director of the Johnson Space Center during the NASA Shuttle - Mir Program. We also thank planetary scientist David R. Williams, acting head of the NASA Space Science Data Coordinated Archive at Goddard Space Flight Center for his input on Moon location references and all the team at NASA for their help with images and information.
We dedicate this issue to Alan Bean, fourth man to walk on the Moon, whose paintings were to grace the stamps. We spoke to him at length, but he sadly passed away before the issue could be laid out. The issue was conceived, planned and designed by Glazier Design. Owner Ben Glazier was born during the Apollo 11 mission; his sister Elizabeth was born during the Apollo 12 mission. Advance planning indeed. 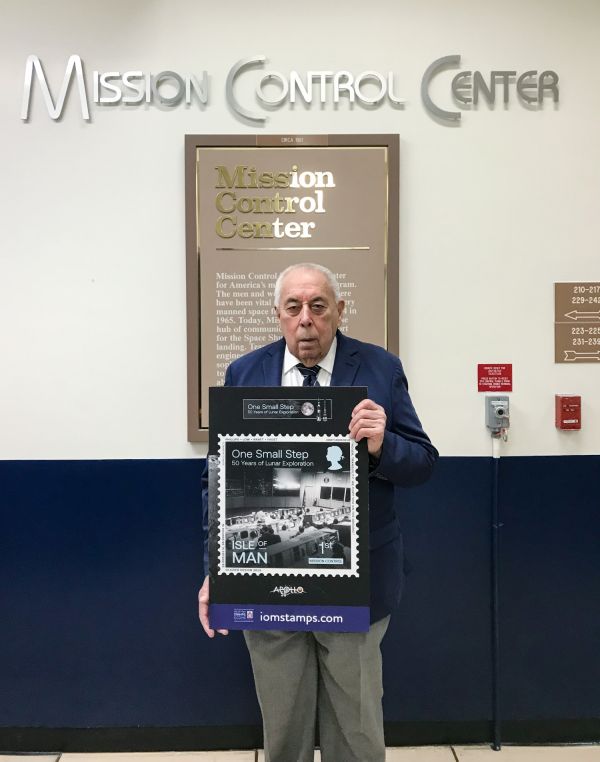 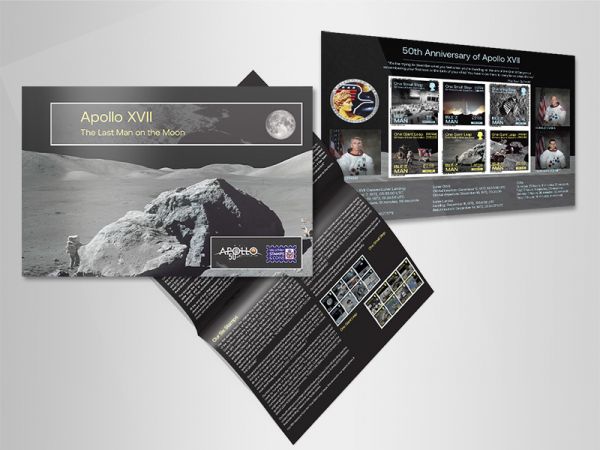 Celebrating the 50th anniversary of Apollo XVII, the last time man set foot on the moon. 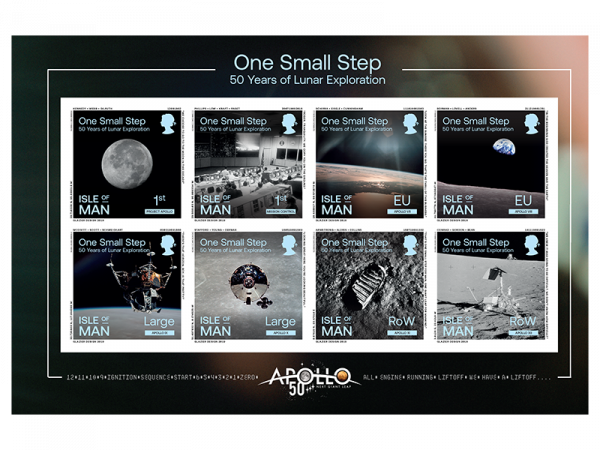 A set of the 'One Small Step' stamps, all beautifully presented in this bold black decorative border 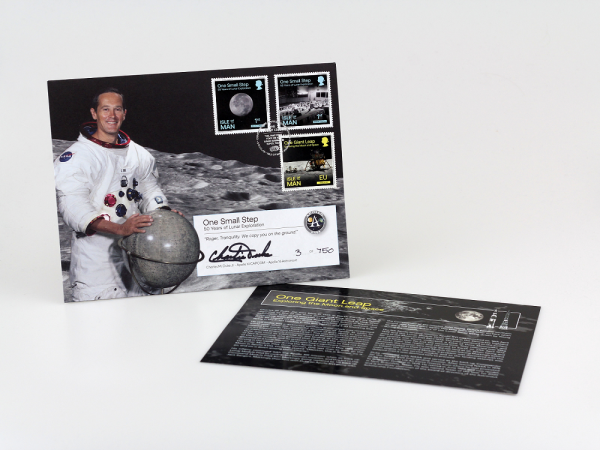 Exclusively produced by Isle of Man Post Office we are honoured to present this very special, limited edition of only 750, signed cover by astronaut and Moonwalker Charles.M.Duke. 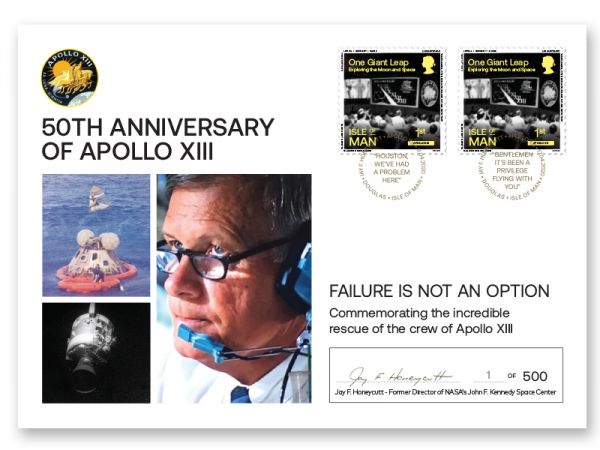 A strictly limited edition of only 500 worldwide, this exclusive cover will be hand-signed by Jay Honeycutt, who was a member of the highly skilled team that successfully rescued the Apollo XIII team. 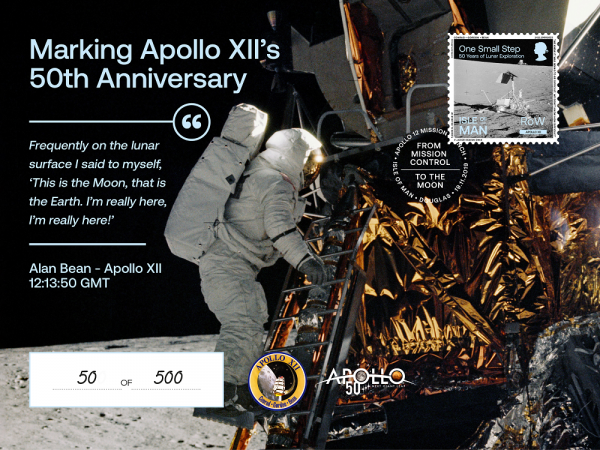 We are proud to introduce this brand new commemorative cover to mark the 50th anniversary of Apollo 12, the second manned mission to land on the Moon.  Our cover pays tribute to Alan Bean who was the lunar module pilot on Apollo 12 and the fourth man to walk on the Moon. 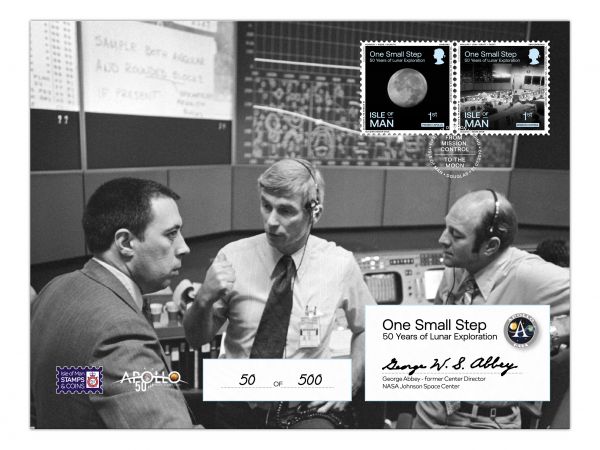 With only 500 available worldwide, this commemorative cover is exclusively signed by former center Director of NASA Johnson Space Center, George Abbey who was present when those famous words were spoken 'The eagle has landed'.

The cover features evocative black and white imagery captured from ground control during Apollo 11, two of the remarkable stamps from the 'One Small Step' collection which are complete with hidden coordinates, and complete with a unique one day only postmark dated 21.07.19 - the official moon landing date.

An incredibly rare opportunity to own what is expected to be a highly sought after and highly prized piece to mark 50 years of lunar exploration. 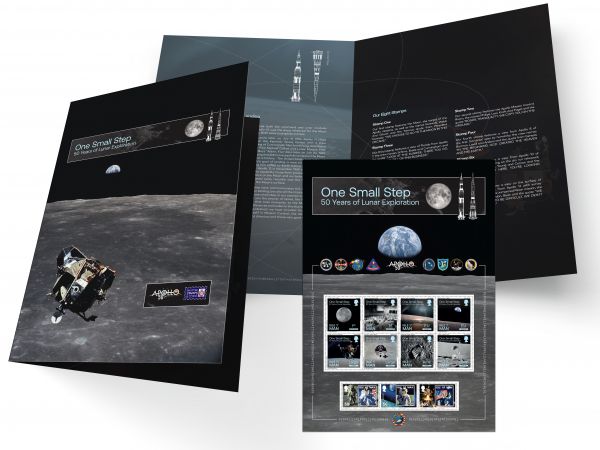 In memory of Alan Bean
This special sheetlet includes the full eight stamp collection presented alongside astonishing imagery.
Featured also is three stamps from our 2009 issue which were prepared by the 4th man to walk the moon, Alan Bean who sadly passed away in May 2018.