Commemorating a century of achievement in transatlantic aviation.

Isle of Man Post Office is proud to commemorate a century of achievement in transatlantic aviation by showcasing the first crossings of the Atlantic by aircraft in 1919 and a selection of the most significant crossings since. The issue was inspired by the 100th anniversary of Alcock & Brown's flight and also the daring exploits of a very British herso, Gp Capt Mark Manwaring who is attempting to break multiple world records in a self-built aircraft in 2020.

The wonderful illustrations for this issue were created by artist and designer Rory Peters at Glazier Design in London. They have been created using an Art Deco style, based on photographs and inspired by the wonderful aviation and transport posters of the late teens and twenties.

1st Class - Curtiss NC-4: This stamp features the Curtiss NC-4, a United States Navy flying boat that flew from Trepassey Bay, Newfoundland to Lisbon, arriving May 27 1919, completing the first crossing of the Atlantic Ocean by air. Under the command of Lt. Cdr. Albert C. Read, the NC-4 covered a distance of 2,400 miles and after arriving in Lisbon, made a symbolic flight to Plymouth from where the Pilgrim Fathers had departed for America on The Mayflower.

EU - Ryan NYP: The Spirit of St. Louis (Registration: N-X-211) officially known as the 'Ryan NYP' was a single engine, single-seat, high wing monoplane that was flown by Charles Lindbergh on May 20–21, 1927, on the first solo non-stop transatlantic flight from Long Island, New York, to Paris, France, for which Lindbergh won the $25,000 Orteig Prize. Lindbergh took off from Roosevelt Field, Garden City, New York, and landed 33 hours 30 minutes later at Aéroport Le Bourget in Paris, France, a distance of approximately 3,600 miles (5,800 km).

Large - Vickers Vimy: This stamp features the Vickers Vimy, the aircraft that won the Northcliffe prize for the first non-stop crossing of the North Atlantic by pilot John Alcock and navigator Arthur Whitten-Brown. Their marathon 16 hours 27 minutes flight in a Vickers Vimy IV (2 x 360 hp Rolls-Royce Eagle VIII engines) on June 14-15 1919 took off from St. Johns, Newfoundland and landed in a Derrygimla bog near Clifden, Galway, after a flight of 1,950 miles.

RoW - R34 Dirigible: On July 2, 1919 under the command of Major G. H. Scott the R34 airship left East Fortune and began the first transatlantic airship crossing and the first double crossing of the Atlantic Ocean. The 3,130 mile journey was completed in 108 hours 12 minutes. The return flight, which commenced on July 10, reached Pelham, East Anglia on July 13, prevailing winds making the return trip much faster at only 75 hours 3 minutes.

£1:52 - English Electric Canberra B.2: The English Electric Canberra is a British first-generation jet-powered medium bomber that was manufactured during the 1950s and set a world record on February 21, 1951, serial no. WD932 made the first direct, non-refuelled Atlantic crossing by a jet aircraft in 4 hours and 37 minutes. Piloted by RAF Squadron Leader A.E. Callard, the aircraft was sent to America to act as the pattern for an order of 403 Canberras for the US Air Force.

£2:55 - De Havilland DH.84 Dragon: In 1932, Amy Johnson married Jim Mollison, who had proposed to her while they were flying together, just eight hours after meeting. In July 1933, they first flew G-ACCV, named "Seafarer," a de Havilland DH.84 Dragon non-stop from Pendine Sands, South Wales. They were heading to Floyd Bennett Field in Brooklyn, New York, but the aircraft ran out of fuel and crash-landed near Bridgeport, Connecticut and both were injured. Earlier that year in April 1933 Amy Johnson and her husband Jim visited the Isle of Man.

We are very grateful to Brian Riddle of the National Aerospace Library at the Royal Aeronautical Society for his contributions with research and writing and for helping us find images on which to base our illustrations and to Ben Glazier for conceiving the idea with RAF Group Captain Mark Manwaring. Through Ben and Mark we are very pleased to be supporting the RAFBF with their fundraising efforts in their 100th year. THE RAFBF helps service personnel and their families when times become challenging. In 2018, the oldest person they helped was 102, the youngest, just two weeks old. You can support them at rafbf.org. 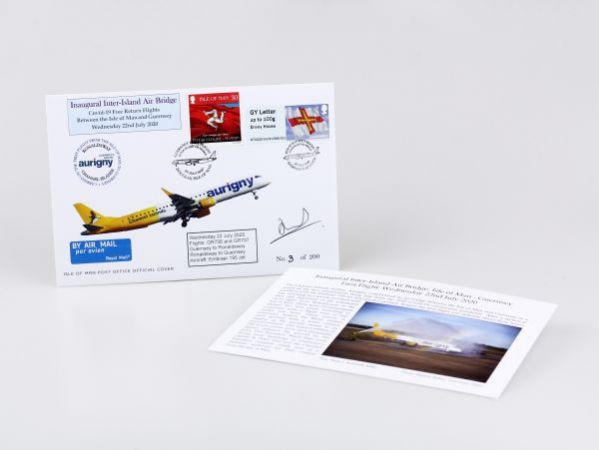 A special limited edition Official Isle of Man Post Office Cover to mark the first inaugural inter-island flight between the Isle of Man and Guernsey on 22nd July 2020. 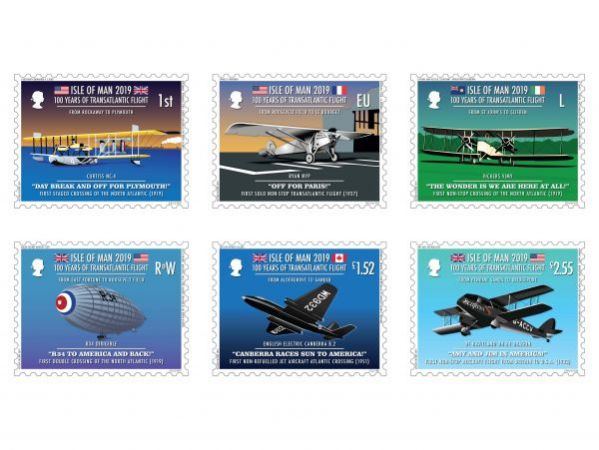 The illustrations for this issue were created by artist and designer Rory Peters at Glazier Design in London. They are based on photographs and have been illustrated in an Art Deco style, inspired by the wonderful aviation and transport posters of the late teens and twenties. 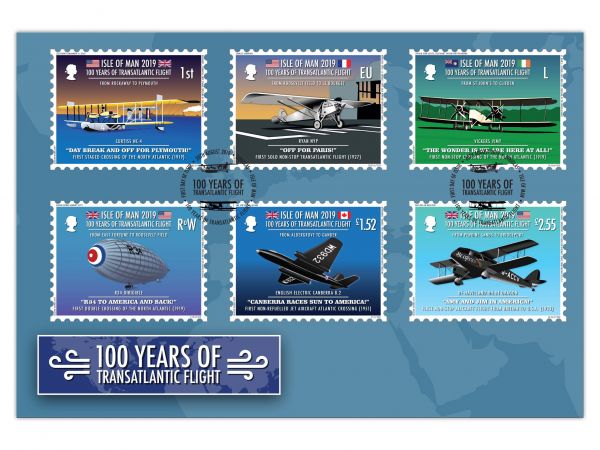 The Art Deco style incorporated in the designs of this six stamp collection is the focus of this deluxe envelope. The cover is complete with a special postmark cancelling the stamps for the first day of issue. 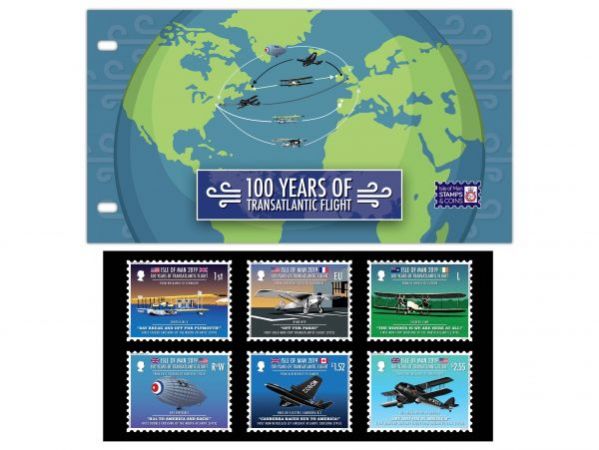 The story of the stamps is told by Brian Riddle, Chief Librarian at the Royal Aeronautical Society and contained within a four page deluxe folder which also includes all six mint condition stamps.