Isle of Man Post Office is delighted to mark the 50th anniversary of Stanley Kubrick's groundbreaking film '2001: A Space Odyssey' (1968), ranked as one of the best films of all time, with a special collection of stamps, each one like the film itself, layered with hidden secrets embedded in microscopic form.

This British-made film was released to UK Audiences in 1968, one year before the moon landing. Audiences were stunned by the effects used and the sheer vision of writer Arthur C. Clarke and filmmaker Stanley Kubrick.

Clarke inspired the film with his book 'The Sentinel' and is also partly responsible for starting the Isle of Man's space industry. He inspired Chris Stott to set up his satellite company ManSat and was also Chancellor of the International Space University when the chapter on the Island was formed with Chris at the helm. The Isle of Man has a thriving space industry, that includes communication with geostationary satellites, an area of research in which Arthur C .Clarke was a leader.

We have been honoured to work with Warner Brothers and through them the Kubrick family, to create a set of stamps that are respectful of the genre, the film and its makers, as well as the millions of fans in the UK and beyond.

The series of eight stamps depicts some of the most iconic imagery and themes from the film: the 20p stamp shows Stanley Kubrick in the midst of creating movie magic. On the 30p stamp, revered sci-fi author Arthur C. Clarke whose short story, 'The Sentinel', from which '2001' was adapted, is pictured on the set, standing in front of the pod.

The 52p stamp features the docking scene at Space Station V, decades before today's ISS was a reality. The 75p stamp has the 'monolith, a featureless yet menacing black structure that provides the time link between past, present and future, that adds so much to the tension in the film.

Heather Downham who played one of the space stewardesses who feature on the 83p stamp, recalled hearing an intake of breath at the premiere, so astounded were cinema audiences at the portrayal of weightlessness in space.

Another one of the defining images is the Star Child, featured on the £1.40 stamp; is this the future of humanity? It is for you to decide. On the £1.93 stamp is astronaut and main character Dr. Dave Bowman, played by actor Kier Dullea. He said later about the film, "It set the benchmark for everything else."

The main theme of tension in '2001' is derived from the interplay between the human characters and the artificial intelligence, HAL 9000. His all-seeing, all-hearing red 'eye', is featured on the £2.01 stamp.

The theme of the film came from Kubrick's own fascination with the Moon and the possibility that an alien life force had visited Earth centuries ago, perhaps before man, choosing the arid and airless surface of the Moon to leave clues, calling cards with evidence that mankind was not alone, that intelligent life had existed before and already mastered the art of intergalactic space travel.

Kubrick knew exactly what his film should look like and the message it was going to deliver as he takes the audience on a mind-bending journey through space and time.

In true Kubrickesque style, each of the '2001' stamps issued by the Isle of Man Post Office contains a message, a secret code hidden to the naked eye. Fans of this collection are challenged to find the following quotes;

1) The only way to discover the limits of the possible is to go beyond them into the impossible.
2) The most terrifying fact about the universe is not that it is hostile but that it is indifferent.
3) Open the pod bay doors please HAL.
4) Eighteen months ago the first evidence of intelligent life off the Earth was discovered.
5) Thank you. You are cleared through Voiceprint Identification.
6) My God, it's full of stars!
7) I've just picked up a fault in the AE35 unit
8) I'm sorry, Dave. I'm afraid I can't do that 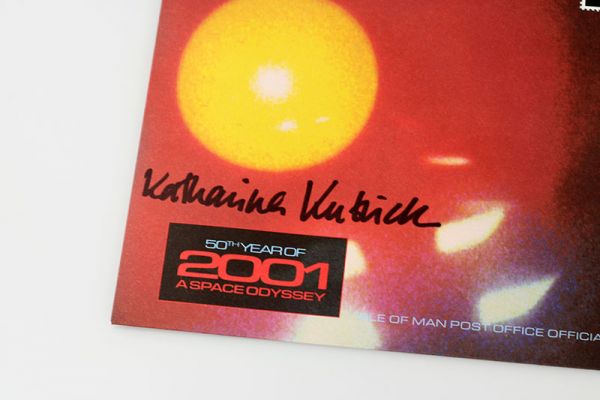 EXCLUSIVE: A unique opportunity to own this Signed Katharina Kubrick Trinity Collection.
With only 40 available, don't miss your chance to own or gift this incredible set of three commemorative covers. 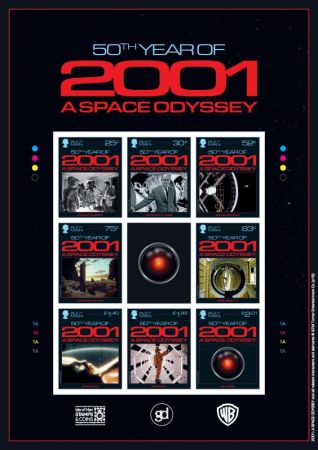 This sheetlet comes from the original stamp print but has not been perforated into detachable individual stamps. The sheetlet continues in our official licenced product range and is only available in mint format. 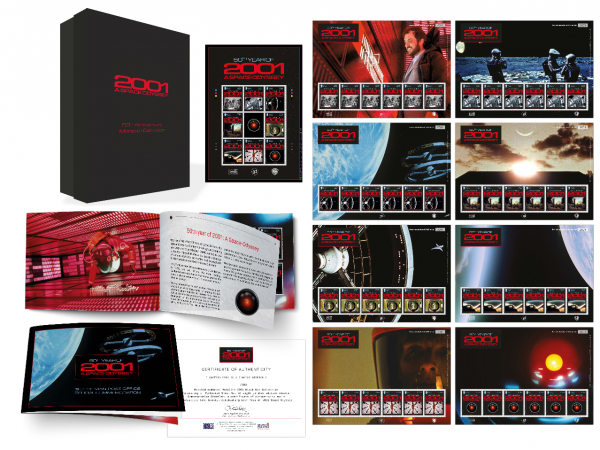 For every 2001: A Space Odyssey enthusiast, this is a collectors dream! Inside the Monolith 2001 Black Box will await a mountain of movie memorabilia, guaranteed to commemorate the 50th Anniversary of this iconic movie in the most special way possible. 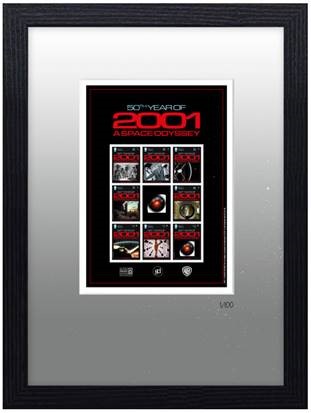 This limited edition framed 2001: A Space Odyssey Sheetlet commemorates the movie in the finest way. Not only is it complete with a mount, ready to hang; when you purchase one of these premium collectables, you will receive a certificate of authenticity on the frame reverse so that you can be assured that yours is one of only a limited number available. 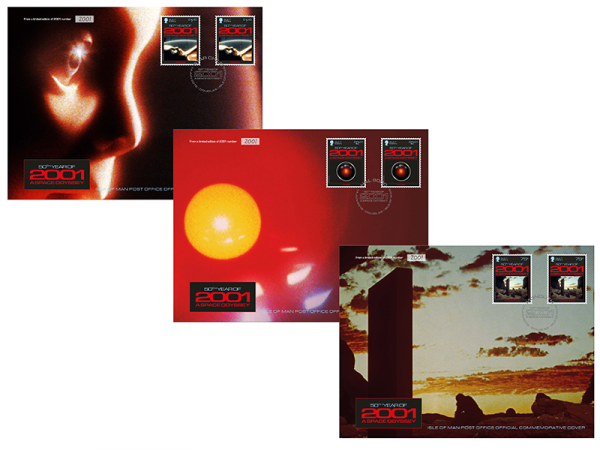 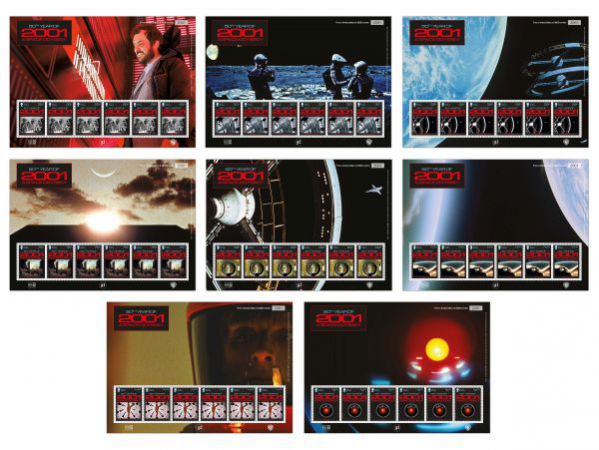 With only 3,000 of each sheet available, this pictorial sheet set is individually numbered with a decorative margin, inspired by the iconic movie. Included is eight sheets, with six stamps on each sheet. 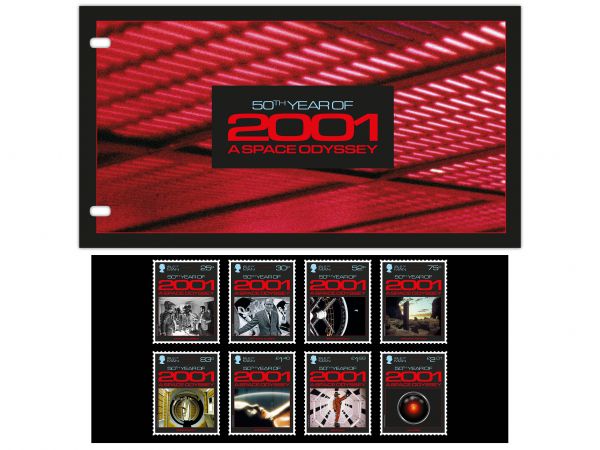 The complete stamp set is presented in a four sided, glossy collectors folder, capturing standout graphics from the movie along with 'behind the scenes' details about each of the images selected for the stamps

This incredible commemorative sheetlet comprises a full set of stamps from the 2001: A Space Odyssey collection on a sheet encompassing a central label. Presented in a decorative wrap, this is a wonderful piece for any fan of this iconic movie. 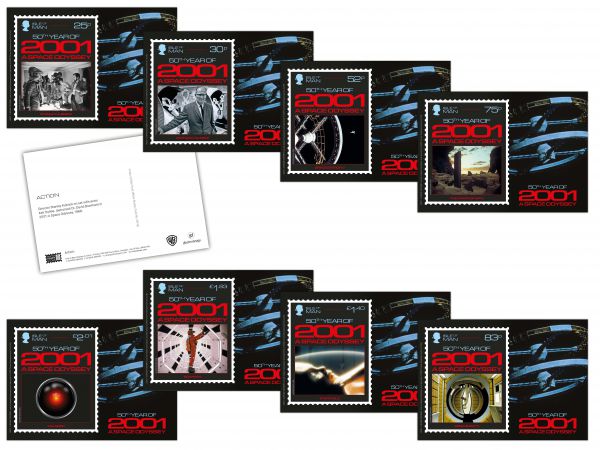 This collection of eight, full colour A6 (105 x 148 mm, 4.1 x 5.8 in) cards features remarkable scenes from 2001: A Space Odyssey; making them perfect for framing. These cards are Numbered 36 (8) of Isle of Man Post Office's series on reverse. This is a truly great collector's item for any fan of this classic film. 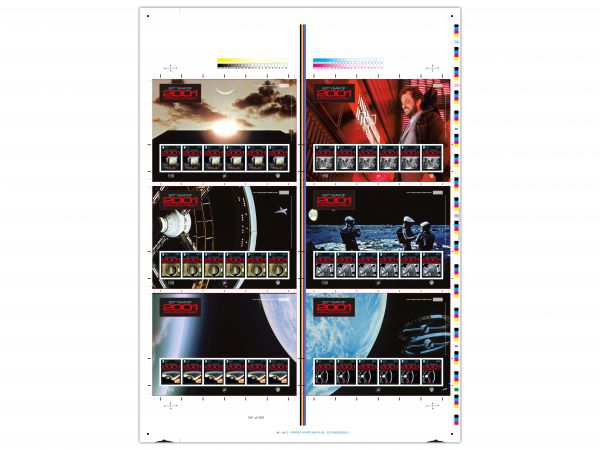 For the true collector we are thrilled to present this very special, limited numbered edition of only 300, imperforate printers pane.