70th Anniversary of the Battle of Britain

Isle of Man Post Office is delighted to give you the rare opportunity to own fabulous collectables signed by heroes of the Battle of Britain.

We commissioned a set of six stamps and a miniature sheet featuring stunning artwork by the renowned aviation artist Keith Woodcock to commemorate this vital period of World War II.

Among the exceptional products produced were a series of special edition covers signed by Royal Air Force servicemen.

These unique collector's items were strictly limited to just 250 examples of each.

The special covers feature all six of our commemorative stamps, cancelled with a special postmark, and comes with an information card detailing the distinguished RAF careers of each signatory.

The Battle of Britain limited edition cover is signed by Squadron Leader G. H. A. Wellum (No 92 Squadron, Spitfires), author of the acclaimed book 'First Light'.

The Battle of Britain was the name given to the air campaign waged by the German Air Force against the United Kingdom during the summer and autumn of 1940. The objective of the German campaign was to gain air superiority over the Royal Air Force (RAF), especially Fighter Command.

The name derives from a famous speech delivered by Prime Minister Winston Churchill in the House of Commons: "The Battle of France is over. I expect the Battle of Britain is about to begin..." 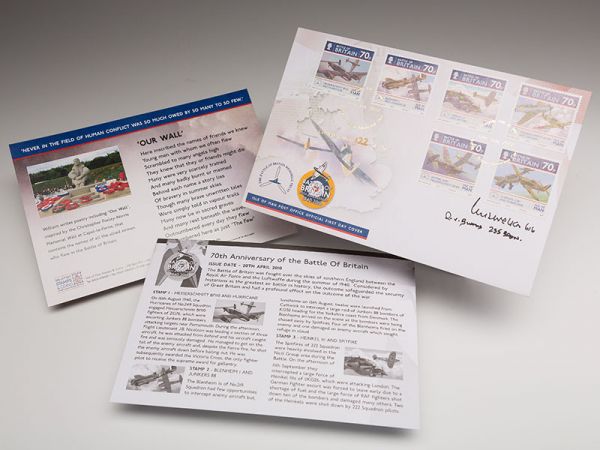