A Beano Christmas on the Isle of Man

Isle of Man Post Office is delighted to present our incredible Christmas issue which is a collection to celebrate eighty years of Beano, the world's longest-running and most-loved comic.

Our Christmas story sees Dennis, Gnasher and friends on the Isle of Man raising a laugh and causing mischief while helping the Manx mail reach Beanotown and all destinations worldwide.

The moral of the tale is that writing to friends and family by post is still the best way to catch up at Christmas, or share good wishes at any time of the year!

When work started on Beano back in 1937, the team had no idea they were creating a British pop culture icon. Now in its 80th year, Beano is officially recognised as the world's longest-running weekly comic, and has been delighting children – of all ages - for generations!

Beano has also had a wider cultural impact, whether reassuring children in the face of the enemy and their worst fears during the Second World War, or introducing its most famous son, Dennis, as a rebellious icon. Above everything else, Beano is recognised as a great British institution of fun.

Dreaming of a Write Christmas
Christmas is the most wonderful time of year in Beanotown, so Dennis and Gnasher are grumpier than Scrooge when Mum reveals that they're heading to the Isle of Man for a festive visit to a mysterious uncle with a shocking secret...

He's a postman – one of Gnasher's most fearsome foes!

Just when Dennis thinks things can't get any worse, a basking Megalodon munches the family's mobile phones. Humbug! He's now 'marooned' on an island, with no way of communicating with his mischievous mates; Christmas 2018 is cancelled.

That's when Uncle Paul reveals a secret way to message mates to his nephew. He explains how writing a letter or a postcard, sticking a stamp on it, then posting it is like sending an epic text message, only it's delivered by your own postie - 'butler'.

Even cooler, Paul arranges for the stamps to be amazing, funny scenes of Dennis running riot having fun on the Island.

Not only do his friends write back, but they promise to meet together on what's quickly become the Christmas Isle of Mischief, to share the festive fun.

So be inspired by Dennis trying something different to bring a smile to friends and family. This year, let's make sure everyone's dreaming of a 'Write Christmas'!

• Dennis and Gnasher completing a 'snowcastle' version of the Tower of Refuge while a scary-looking Viking prepares to chuck a snowball.

• Dennis and Gnasher, having painted their kartie/sled with Isle of Man Post Office livery, have Paul the Postman tied up in a sack as they throw presents to all while they race down Tynwald Hill.

• At a snowy Douglas Sea Terminal Gnasher is trying to grab at the non-existent tail of a Manx cat who is teasing him with a sausage-shaped Christmas gift. Behind Gnasher is the famous four-horned Loaghtan sheep, trying to 'spike' Gnasher!

• Dennis and Gnasher and the Manx Minx fairies make light work of the letters to Beanotown allowing time for Paul the postman to put his feet up!

• At the old Marine Drive toll gate Santa, squashed into his tiny Peel P50 car, pursues Dennis and Gnasher in their menacing sidecar and, unseen by Gnasher, a Manx cat joins in the fun on his sled.

• Santa and his reindeers find flying conditions difficult as Dennis turns the world's largest waterwheel at Laxey into a snowball chucking machine!

• At Castle Rushen the Beano gang assemble for their surprise Christmas party proving that sending out invitations by post gets results.

"Dennis loved the idea of taking time out to tell his mates how much he valued them at Christmas. The fact he sent them cool postcards, with these amazing, funny stamps, meant they took notice and over-delivered back too. The magic of Christmas! At this time of year he's usually thinking about his letter of excuses to Santa, so this was a big departure for him. He's so pleased with the results, he's already talking about writing thank-you letters as his new year resolution. Result!"
Michael Stirling, The Beano

A colourful, festive and truly AWESOME collector’s piece for any fan of the world’s most loved comic. 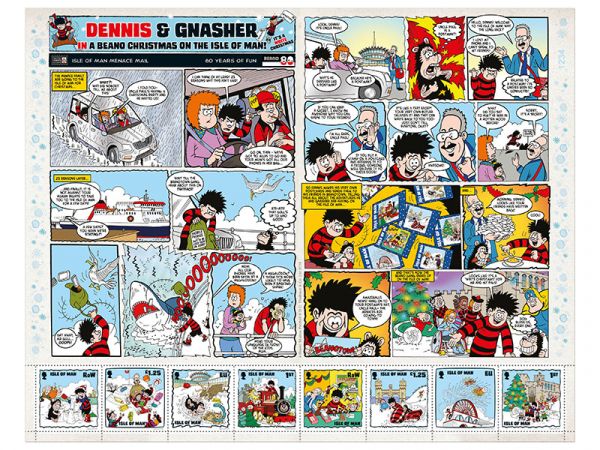 Join Dennis and Gnasher in a Beano Christmas on the Isle of Man with this incredible comic strip sheetlet which has been created exclusively for Isle of Man Post Office. 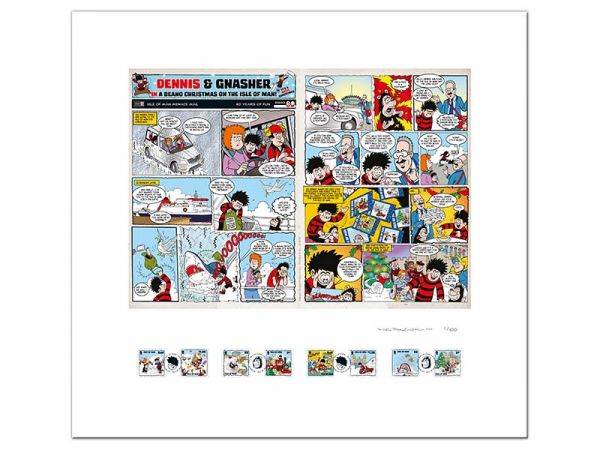 The ultimate prize for the true Beano fan, a hand-signed print by Beano artist Nigel Parkinson for which there are only 100 available worldwide. 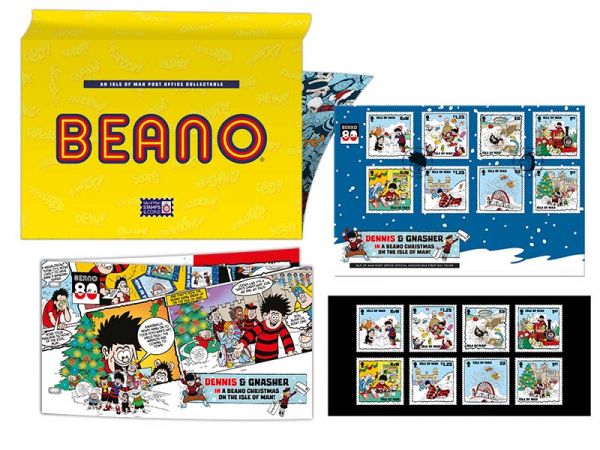 The ideal duo - a presentation pack and first day cover from this fun-tastic collection are provided as a set, creating the perfect gift. 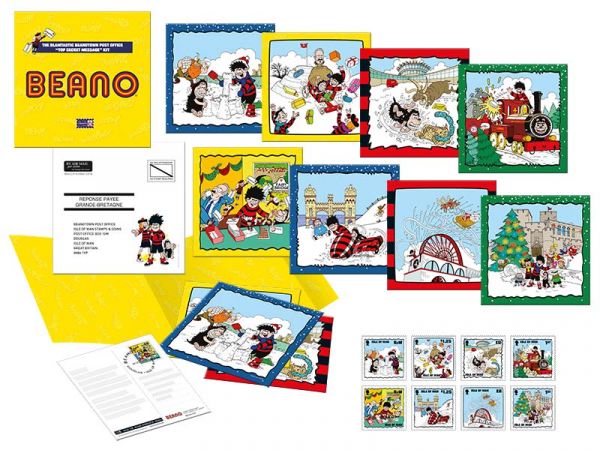 Complete with a note from Dennis unveiling his secret message, this kit really does put the fun into letter writing! 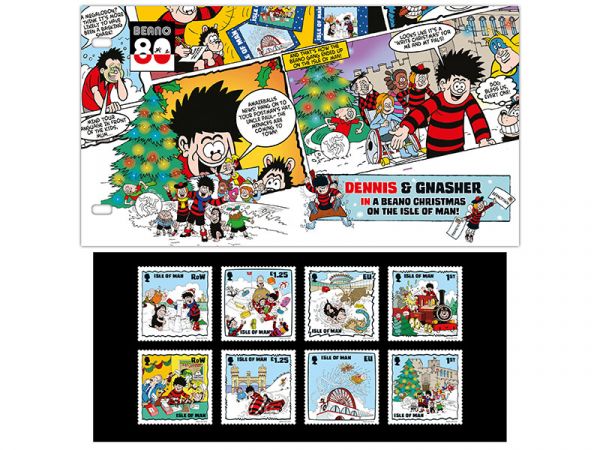 Join Dennis and his trusty best friend Gnasher as they cause chaos in a Beano Christmas on the Isle of Man! 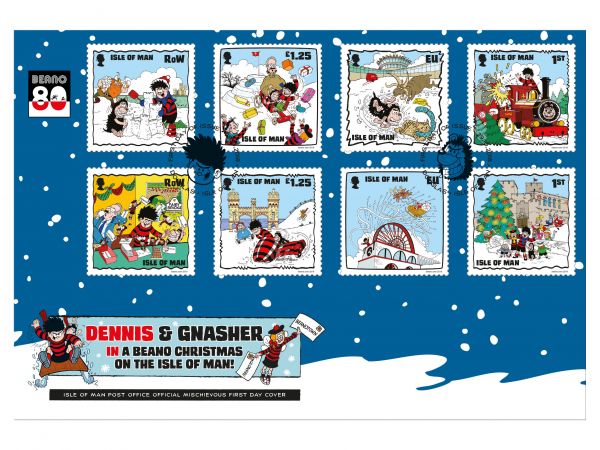 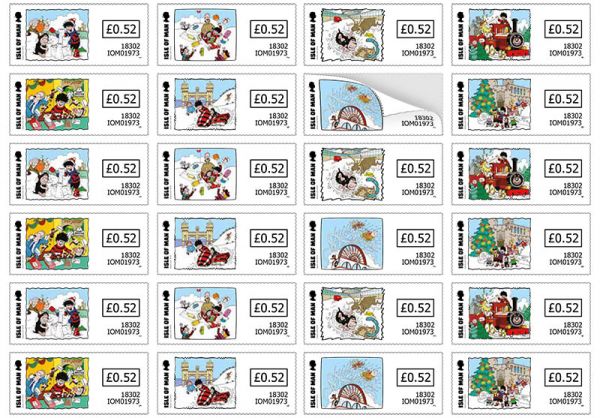 Our self adhesive stamp sheet is made up of 24 stamps, all with a 52p value for your convenience.
**Please note: The purpose of this sheet is postal use. If you are looking for a collectible then the comic sheet is your best option** 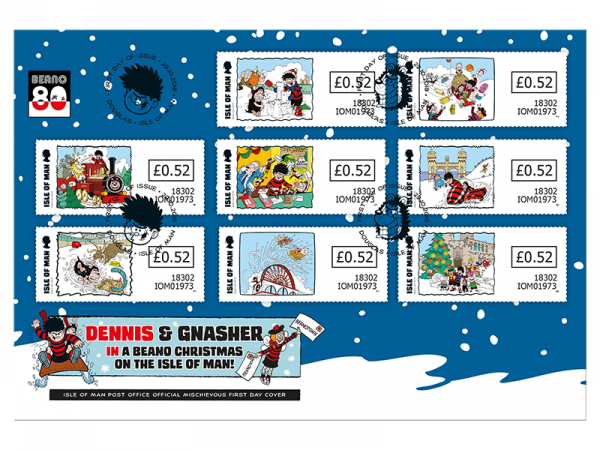 A perfect addition for the true philatelic collector, a full set of the self-adhesive stamps presented on a deluxe envelope, cancelled with first day of issue. 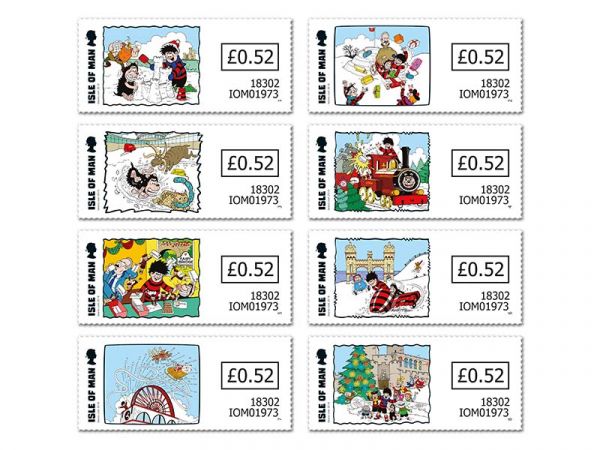 We are thrilled to present our third variable value definitive stamps - A Beano Christmas on the Isle of Man.