Isle of Man Post Office is delighted to issue this extraordinary set of six stamps presenting the work of one of Isle of Man’s most individual and popular artists, Eileen Schaer. Widely recognised through her unique and peculiar art style, each stamp showcases Eileen’s original paintings, incorporating the mischievous and playful personality of its subjects, in particular the animals. 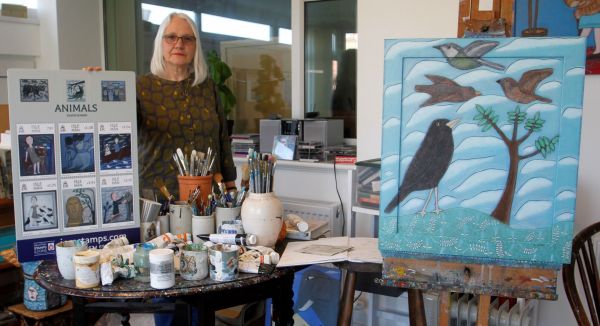 Eileen Schaer is a self-taught contemporary visual artist and painter whose artistic career spans for nearly 50 years. Her magical paintings depict Eileen’s unique imagination of dreamlike worlds and intriguing characters. At first glance her paintings would appear childlike but it is precisely this quality of innocence and spontaneity that her admirers and collectors like so much.

She has worked and exhibited consistently all her adult life and has work in many private and public collections. She has been represented in numerous mixed thematic exhibitions in academic, commercial and public galleries in diverse locations such as India, Switzerland, London and Liverpool.

Eileen hails from Liverpool where she was born, raised and educated. After meeting her husband, the late artist and teacher David Fletcher, they lived in London for a number of years before eventually deciding to move to the Isle of Man in 1975.

Continuing their life on the Isle of Man, David moved onto becoming a Course Leader for the Arts Foundation Course at the IOM College for many years. Together with their two children, they lived next door to the Laxey Woollen Mills surrounded with the distinctive sound of a rookery nearby which these birds have often been featured in Eileen’s work. Being an aesthete couple, Eileen and David became very active and a positive presence within the Manx contemporary art scene by inspiring, exhibiting and promoting the work of generations of young Manx students and graduates.

The stamps showcases Eileen’s artistic skills and love of animals. The animals are set in an imaginary setting either alone or in human company. She hopes her paintings are uplifting and bring joy so that they can take life out of its mediocrity which she thinks is essential during these dark times.

Eileen has worked in a variety of media over the years: from meticulous tiny gouache paintings to large scale oil paintings, painted sculpture and lino-cut prints. Our stamp images represent paintings in acrylic on board, with the imagery extending over the risen frame of each piece 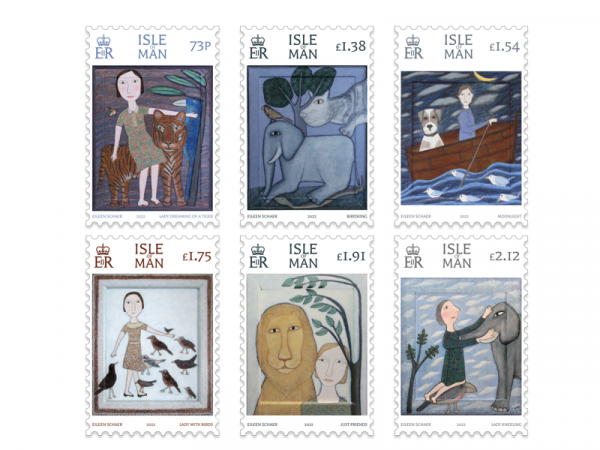 This six stamp collection showcases the work of one of Isle of Man’s most individual and popular artists, Eileen Schaer. With multiple work and exhibitions all through her 50-year artistic career, Eileen’s work features unique worlds and quirky characters. 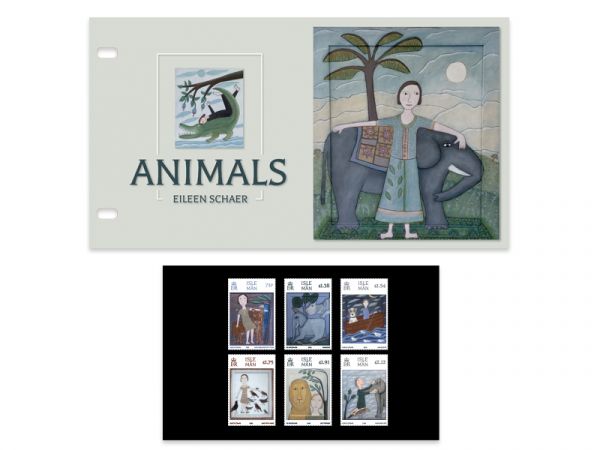 There are two original paintings on the cover of this four page glossy folder. On the left side is the ‘Lady Reclining on a Crocodile’ and on the right is the image of the ‘Lady Resting with an Elephant'. Within the folder you will find the full collection of six stamps and informative issue text. 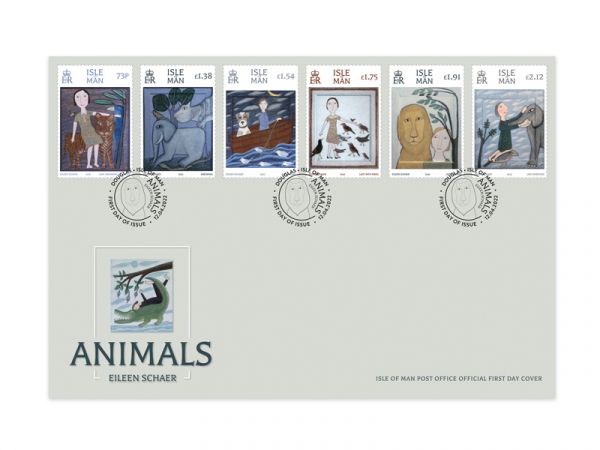 Each one of the six stamps from this collection is presented here on the cover of this deluxe neutral envelope. Featuring Eileen Schaer’s interesting and magical pieces of dreamlike world and eccentric characters, in particular animals. The stamps are cancelled with a special first day of issue postmark and inside you will find informative issue text about the stories of the stamps and the artist.