Isle of Man Post Office presents an innovative miniature sheet inspired by the BLOODHOUND project to set a new land speed world record, and highlighting Manx connections to the ambitious mission. The technical innovation incorporated into the BLOODHOUND car is reflected in the sheet’s inventive print finishes.

The engineering excellence and technical innovation behind the BLOODHOUND project to set a new land speed world record is encapsulated in this Isle of Man Post Office miniature sheet.

It is not only a celebration of the bid to build a car capable of travelling at 1,000mph, but also of the project’s connections to the Isle of Man.

The sheet includes two stamps and two labels, with one featuring the legendary Richard Noble and current world record holder Andy Green, BLOODHOUND’s driver. Behind the images lie technical line drawings underlining that this miniature sheet is a showcase of engineering prowess as well as the ambition of setting new records.

To ensure the miniature sheet reflects technical innovation it includes three special print finishes; metallic ink, varnish and thermochromic ink, which disappears when heated to reveal the inside of the BLOODHOUND car.

The car includes components designed and built in the Isle of Man, a connection this issue celebrates. For example, an essential regulator created by Swagelok plays a crucial role in the car’s fuel system, alongside other functions.

The bond was strengthened in September 2017 when the BLOODHOUND team visited the Isle of Man to speak to secondary school students, with the aim of inspiring the next generation of engineers to take advantage of the training opportunities and career paths available in the Island.

The sheets are also available, in mint condition, in a collectable Presentation Pack and on an official First Day Cover, cancelled with the day of issue. Both include the BLOODHOUND story, written by the team, details of Swagelok’s involvement and a contribution from Adrian Moore, Chairman of the Isle of Man Aerospace Cluster about how BLOODHOUND can inspire and educate. 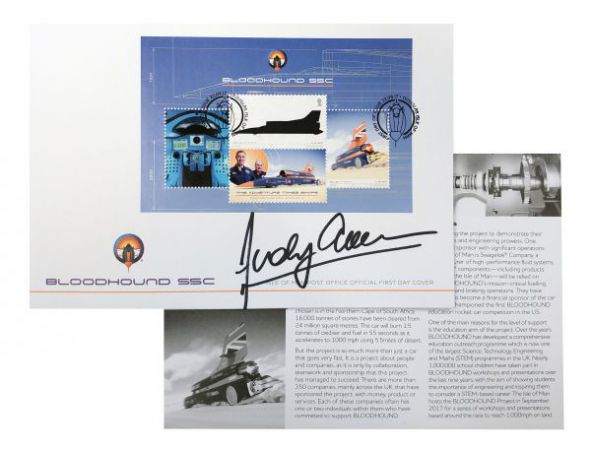