Coastal Birds of the Isle of Man by Jeremy Paul

We are honoured to present this set of six stamps featuring the work of renowned local wildlife artist Jeremy Paul. This, our eleventh stamp issue with the award winning artist, celebrates the important conservation work of the Manx BirdLife census.
This collection features the following six species of bird found on the Island which are Birds of Conservation Concern in the British Isles; Oystercatcher, Eider, Little Tern, Fulmar, Black Guillemot and Razorbill.

The works featured on the stamps capture a moment in time, creating a sense of quiet stillness in which wild birds or animals are seen, undisturbed by the viewer. These atmospheric works are an accurate portrayal of the birds in their natural environment.

Jeremy Paul
Lancashire born, Jeremy Paul has lived on the Isle of Man for many years now. He originally trained as a marine biologist and is a completely self-taught artist, the essence of his work being the accurate portrayal of wildlife in its environment. Jeremy has won awards for his work including BBC Wildlife Artist of the Year – Category Winner 2010, 2011, 2012 and the British Wildlife Award at the National Exhibition of Wildlife Art 2015. He has also just been shortlisted for the David Shepherd Wildlife Foundation's (DSWF) Wildlife Artist of the Year award. 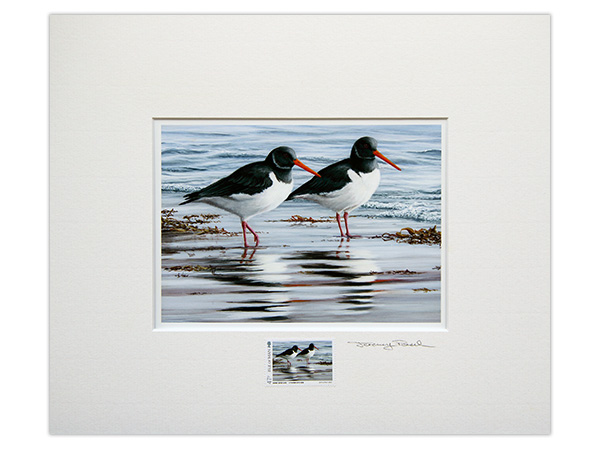 The beauty of the Coastal Birds of the Isle of Man stamps is amplified by these magnificent prints.
These prints, on archival matte paper using light-fast pigmented inks, each have an image size of 17 x 12cm and an overall mount of 30 x 25cm, ideal for framing. Each print is completed with the complementary stamp and signed by the artist Jeremy Paul.