Isle of Man Post Office is pleased to showcase the long and fruitful artistic partnership of Nancy Corkish and David Byrne who lived together for nearly three decades in the closest dwelling to the rugged southern tip of the Isle of Man until Nancy’s death in January 2021. Inspired by the atmospheric landscape and strong sense of place, they produced hundreds of watercolour paintings which have been enjoyed by a great many people on the Island.

Watch the video below as David Byrne talk about the stunning collection:

This issue honours local artists David Byrne and Nancy Corkish who lived together in the last house on the road before The Sound in Cregneash for 28 years.

Nancy was also well known for a variety of illustration commissions including a number of our stamp issues over a period of almost forty years. She is best known to stamp collectors as the artist behind the landmark ‘Manx Cats’ issue of 1996, though she first shared an artwork credit with John Nicholson RI in 1986. She was primarily a landscape painter who became focused on painting personal emotion through observation in her work, her work became well-known and much sought-after on the Island.

Her sensitivity to environment and her determination to capture its essence is evident in her own words: “The Island is geared towards watercolour painting. It could be with the sea being all round it and you get a lot of moisture in the air, you get this sort of veil over things. You can wake one day and it will be a pinky, mauve day or it can be a greeny, grey day, or it can be a really golden day and you do get feelings about the light. I think the Isle of Man is very sympathetic to watercolours because of the subtlety of the light.”

She died earlier this year and this issue is intended, in part, to form both a tribute to her memory and a demonstration of her sensitivity and talent. It also records her close artistic partnership and working relationship with fellow-artist David Byrne.

David, now aged 90, still lives in their Cregneash cottage. He began to devote more time to painting seriously in 1956, having forsaken long-distance running. David took early inspiration to paint the Manx landscape from the work of William Hoggatt and the example and friendship of Norman Howell while later developing great admiration for the watercolours of Archibald Knox and Norman Sayle. Like Nancy he has been a well-known figure in the Manx art scene for decades, with paintings in a great many Manx collections, but this is his first set of stamps. He is also a Manx speaker, so we and he felt it was appropriate to use the Manx issue title Creneash, y Balley Ain to more closely associate with this most beautiful and protected ancient landscape. The title has been supplied by Culture Vannin’s Yn Greinneyder and translates as Cregneash, Our Home.

The couple’s aspirations for their work is evident in their shared commitment to watercolour painting. We hope this selection of images serves Nancy’s legacy and is a fitting tribute to a unique and positive partnership

This collection of eight stamps (First Class, EU, Large value and ROW) not only illustrates Cregneash's outstanding natural beauty but also to properly respect Nancy and David’s individual and joint contributions by pairing and contrasting their respective visions of their shared home and surrounds. Similar but different subjects have been selected and balanced across the set. The scenes are not restricted to Cregneash village but encompass the whole peninsula to capture the varied topography, dramatic skies, changing weather and seasons and the sense of belonging that both artists shared. To underline this close partnership the stamp values are set in pairs, with a work by each artist represented side by side and spread over four sheet values.

We are very grateful to David Byrne and Anita Hogarth (of Artists’ Spaces website) for their kind assistance with this issue. 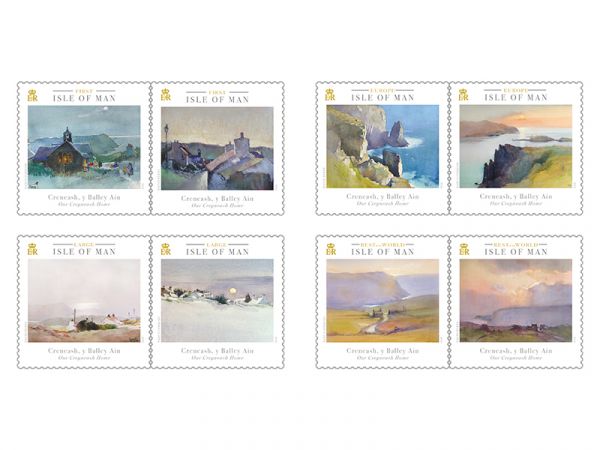 A scenic and colourful set of stamps by the paintings of David Byrne and Nancy Corkish that showcases their long and fruitful artistic partnership who lived in together for nearly three decades in the closest dwelling to the rugged southern tip of the Isle of Man until Nancy’s death in January 2021. Inspired by the atmospheric landscape and strong sense of place, they produced hundreds of watercolour paintings which have been enjoyed by a great many people on the Island 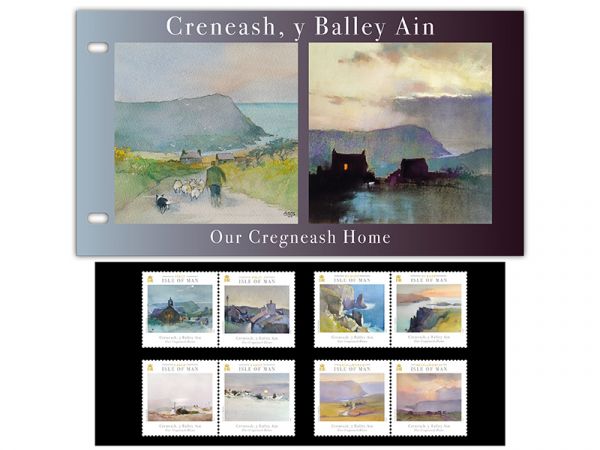 The complete set of the 'Creneash, y Balley Ain – Our Cregneash Home' stamps. The cool colour palette that Nancy and David used, 'pops' against the classic black mount which is housed within this striking, glossy, four page folder. 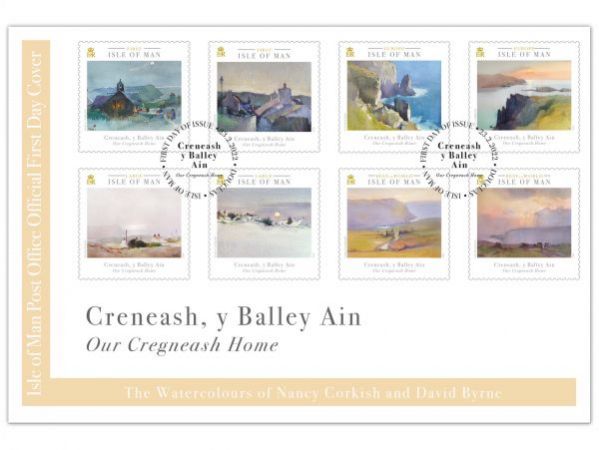 All eight 'Creneash, y Balley Ain – Our Cregneash Home' stamps are beautifully presented on this neutral cover that balances the cool colour palette of the watercolour stamps. The stamps are cancelled with a unique and bold black first day of issue postmark.