Commemorating the 75th Anniversary of D-Day

Isle of Man Post Office is honoured to present a set of eight stamps commemorating the 75th anniversary of the Battle of Normandy, which lasted from June 1944 to August 1944 and resulted in the Allied liberation of Western Europe from Nazi Germany's control.

Our set is a special 'stamp on stamp' design and includes the artwork from our 1994 collection. This is an officially licenced product of the MoD.

General The Lord Dannatt GCB CBE MC DL, Patron of The Spirit of Normandy Trust said:
'I welcome the issue of the D-Day commemorative stamps issued by the Isle of Man Post Office which will serve as a visual reminder of the historical significance of D-Day and the subsequent battle for Normandy. This was the generation that literally "saved the world". We owe them nothing less than to salute their courage and honour the memory of those who sacrificed their lives for our freedom.'

To mark the 75th anniversary of D-Day, the Isle of Man Post Office is privileged to issue a new set of stamps, a dedicated collection honouring all the Manx men and women involved in the historic landings. Our set is a special 'stamp on stamp' design and includes the artwork from our 1994 collection.

Codenamed Operation Overlord, the battle began on 6th June 1944, also known as D-Day, when some 156,000 American, British and Canadian forces landed on five beaches along a 50-mile stretch of the heavily fortified coast of France's Normandy region. The invasion was one of the largest amphibious military assaults in history the Normandy beach landings.

The stamps are also featured on our Presentation Pack and First Day Cover,each accompanied by an illustrated card sharing excerpts from the D-Day archives of the Manx Aviation and Military Museum selected by curator Ivor Ramsden.

This stamp-on-stamp presentation, derived from our 50th Anniversary of D Day 1994 commemorative issue depicts the most prominent military leaders of the Allied Forces who formulated plans which marked the start of a long and costly campaign to liberate north-west Europe from German occupation.

The Commanders featured on the stamps are:

We are proud to support The Spirit of Normandy Trust
The Spirit of Normandy Trust provide financial assistance for veterans of the three Services who served in Normandy, France during WW2 and their dependants who are in need.
Their aim is to increase the knowledge, understanding and appreciation of the general public concerning those events leading up to and beyond the Normandy Campaign and their historical significance.
The Trust help people of all ages and from all walks of life, are heavily involved in charitable activities and also provide grants to organisations. 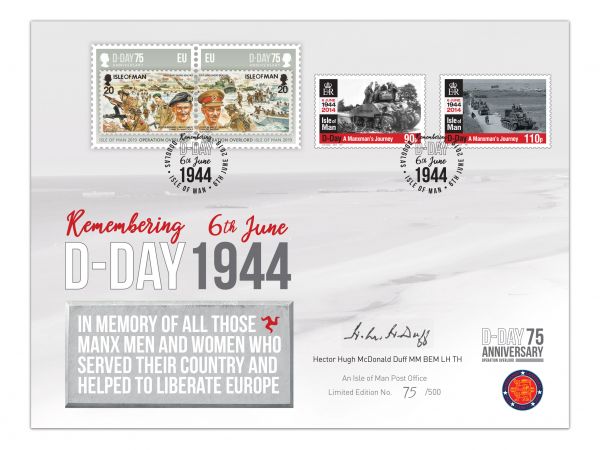 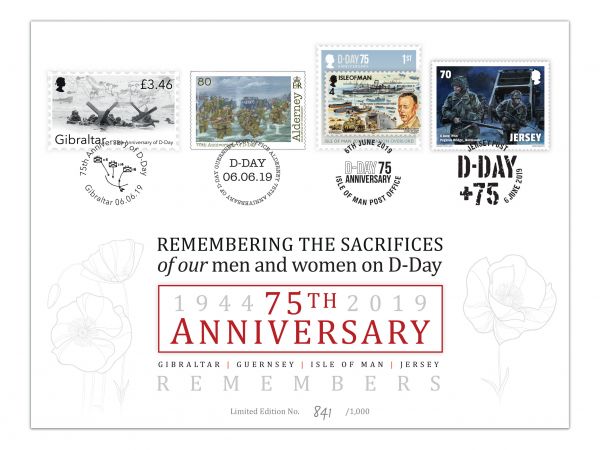 We are delighted to announce the second in a series of joint collaborations with our friends in Guernsey, Jersey and Gibraltar Post.
Limited to 1000 editions, this special commemorative envelope will be issued by Britain’s Crown Dependencies and Overseas Territory Guernsey, Isle of Man, Jersey and Gibraltar on June 6th 2019 to mark the 75th anniversary of the D-Day landings on the beaches of Normandy.