Isle of Man Post Office proudly presents David Bowie as performer in this set of eight stamps spanning fifty years of his remarkably varied career. The set also celebrates his performance in Everybody Loves Sunshine (released in the United States as B.U.S.T.E.D), filmed on the Isle of Man.

“I feel like an actor when I’m on stage, rather than a rock artist,” David Bowie once observed. It was a telling remark. A man of many parts, Bowie turned his hand not only to music and acting, but to painting, writing and filmmaking – and what linked them all was his compelling sense of theatre. On stage, on screen, on canvas or in song, the notion of performance is always there. Time and again in his lyrics, Bowie identifies himself as the player in his own drama. “I felt like an actor,” he sings in Ziggy Stardust’s opening number ‘Five Years’. On Aladdin Sane he adopts the character of an ageing Hollywood star to sing ‘Cracked Actor’, a title later appropriated for a famous documentary portrait of Bowie himself. On the sleeve of Hunky Dory he even describes himself as “the actor”.

The theatrical sensibility which permeated Bowie’s songwriting spilled out into his legendary live performances: from the physical theatre of the Ziggy Stardust shows to the revolutionary staging concepts of the Diamond Dogs tour (“my set is amazing,” he sang on the accompanying album, and on stage it came true), and from the stark monochrome aesthetic of the Thin White Duke concerts to the rainbow-hued rock theatre of the Glass Spider tour, Bowie persistently blazed a trail for others to follow, redefining the parameters and possibilities for the staging of live music. The same is true of his videos, which found him embracing with relish an ever-changing succession of roles, from the New Romantic Pierrot of ‘Ashes to Ashes’ to the love-struck Buster Keaton of ‘Miracle Goodnight’, from the callow youth and preening rock god of ‘Blue Jean’ to the button-eyed enigma of ‘★’ and ‘Lazarus’.

So it’s hardly surprising that when Bowie set aside his music and turned his hand to the thespian art, he did so with great proficiency. Many a rock star has taken a stab at acting, but with more than 20 feature films, half a dozen television roles and a celebrated Broadway run to his credit, Bowie the actor was no dilettante, building up a substantial body of work. In the wake of his breakthrough role in The Man Who Fell to Earth, casting directors often regarded him as a go-to guy for outcasts and loners, a niche which happened to suit Bowie’s tastes very well. As both actor and musician, he was always drawn to life’s outsiders, to the people stranded on the fringes of society: Newton, Baal, Celliers, the Elephant Man. And whatever the role, from Pontius Pilate in The Last Temptation of Christ to the ruler of Atlantis in Spongebob Squarepants, it was unfailingly tackled with intelligence, warmth and sincerity.

On stage, the song ‘Cracked Actor’ was accompanied by one of Bowie’s wittiest routines, as he donned a Shakespearean doublet and brandished a human skull, a rock star Hamlet pondering the ephemerality of life and the vanity of fame. It was quintessential Bowie: a cracked actor to the tips of his fingers.

Nicholas Pegg is one of the world’s leading authorities on the life and work of David Bowie. He is the author of The Complete David Bowie, described by the artist’s longtime producer Tony Visconti as “the best Bowie reference book one could ever hope for”. Nicholas has acted as consultant and contributor to numerous Bowie projects, including the V&A Museum’s exhibition David Bowie Is, and the BBC documentaries Five Years, The Last Five Years and Exploring ‘Life on Mars?’… He is a regular contributor to the Album to Album Bowie podcast, and has hosted Bowie tribute events and radio specials for broadcasters as far afield as the UK and Australia.

Away from the world of David Bowie, his writing credits include theatre shows, audio plays, short stories, and the acclaimed concept album Decades, a collaboration with songwriter David Palfreyman. Nicholas is also an actor, with credits including everything from Shakespeare to Pantomime, Scottish Opera to Doc Martin, and regular appearances as a Dalek in Doctor Who.

Jonathan Barnbrook was a long-time collaborator with David Bowie. He designed all of his album releases from Heathen in 2002 to his final album ★ in 2016. He was also artistic adviser and part designer of the Victoria and Albert Museum exhibition David Bowie Is. Barnbrook received 2 Grammy nominations for his David Bowie covers, winning one of them for ★.

In addition to the work for Bowie his studio is also well known for its work for cultural projects and activism, collaborating with Banksy and Adbusters and releasing typefaces through his font foundry Barnbrookfonts. His influence on British graphic design was recognised with a major retrospective at the Design Museum, London in 2007. In 2015, he was awarded an Honorary Fellowship by Central Saint Martins in recognition of his contribution to graphic design and typography.

The Man Who Fell To Earth ©Geoff MacCormack 2022 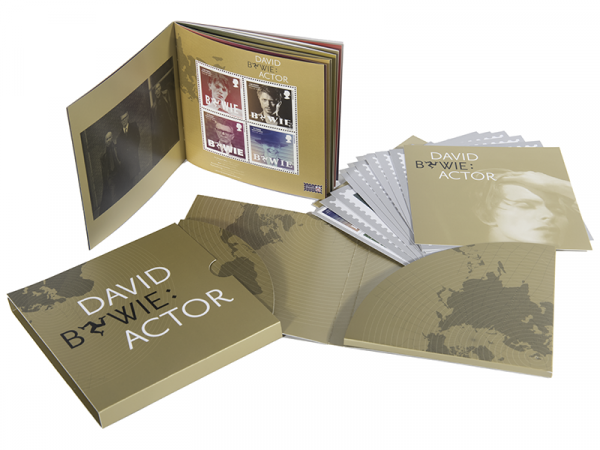 A digital view of the Bowie Box really doesn’t do justice to the sheer quality of the design and print finish. Every aspect of it speaks Bowie. Combining the Bowie Stamp Card Set and Bowie Booklet in a neatly designed gold metallic slipcase and gatefold wallet, this box set will sit perfectly alongside your Bowie CD and DVD collections. A must-have for all discerning Bowie collectors and a worthy addition to any collection. 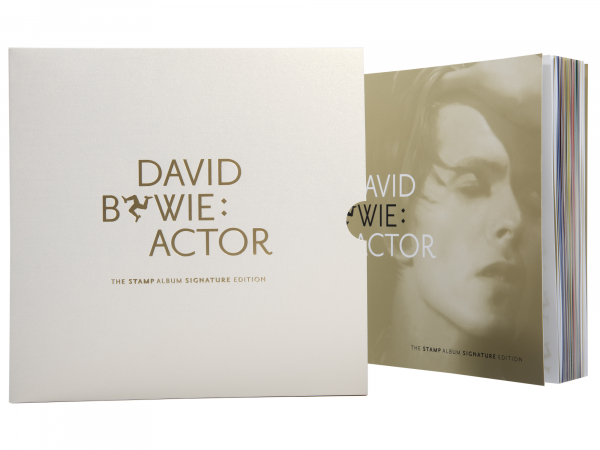 This elegant, highly-collectable publication brings together a host of eminent visual artists, writers and film professionals in appreciation of David Bowie’s versatility and sheer talent as an actor and performer. 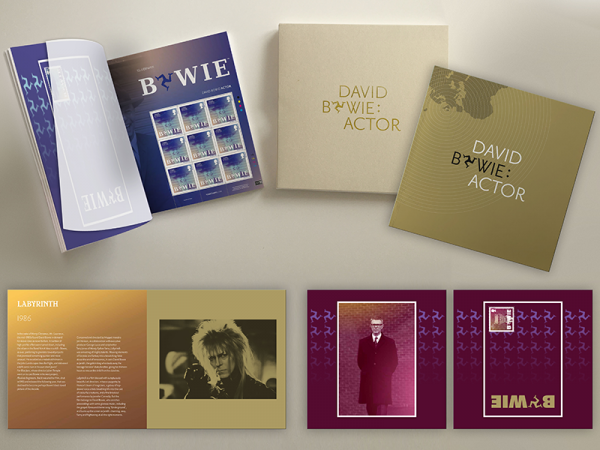 This elegant, highly-collectable publication brings together a host of eminent visual artists, writers and film professionals in appreciation of David Bowie’s versatility and sheer talent as an actor and performer.
The Bowie Stamp Album offers real value for money: the added stamp values of mint condition stamps included in this product amount to £98. 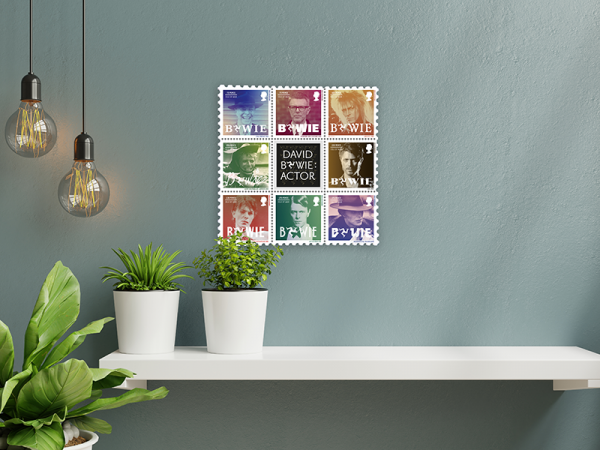 Make a statement in your home with this eye-catching Bowie Wall Art. 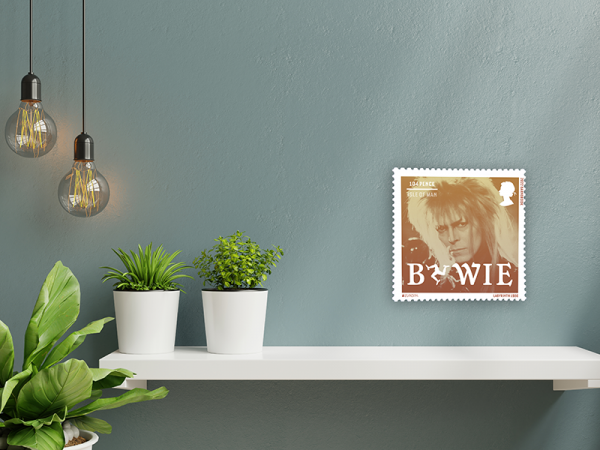 The perfect addition to the home of any David Bowie super fan, this wall art presents Bowie in one of his most memorable and recognisable on-screen performances as Jareth the Goblin King from the 1986 film Labyrinth. 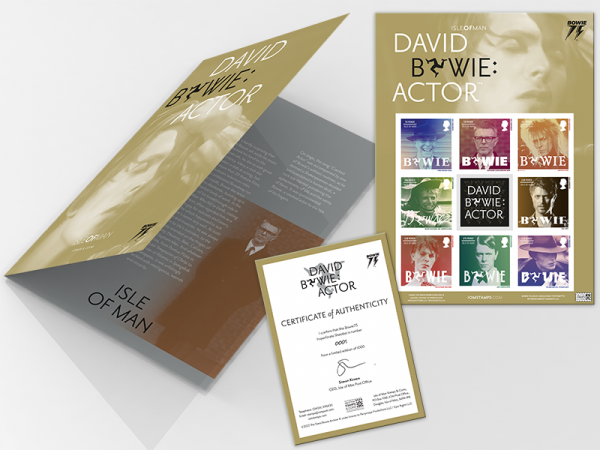 Limited edition of just 1000 examples worldwide, this sheet features all eight stamps from the collection. 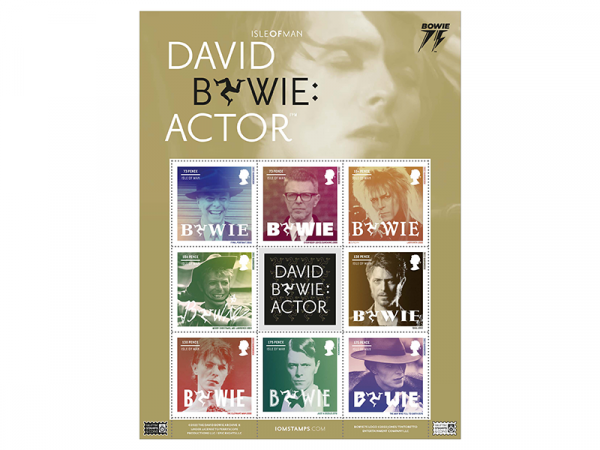 This sheetlet commemorates the 75th anniversary of the birth of David Bowie, it is therefore apt that the official logo only features on this sheetlet which brings all eight of our officially licenced David Bowie: Actor stamps together. 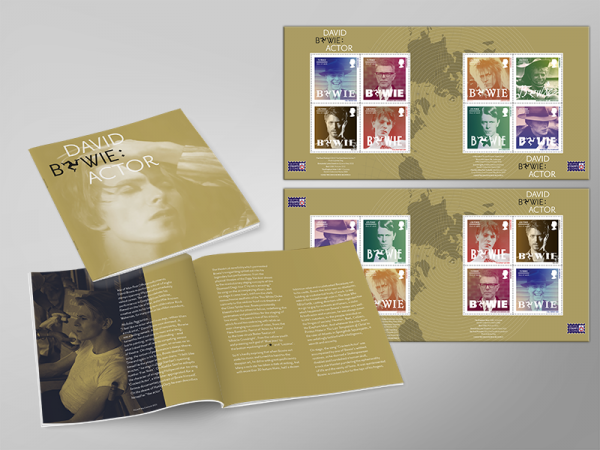 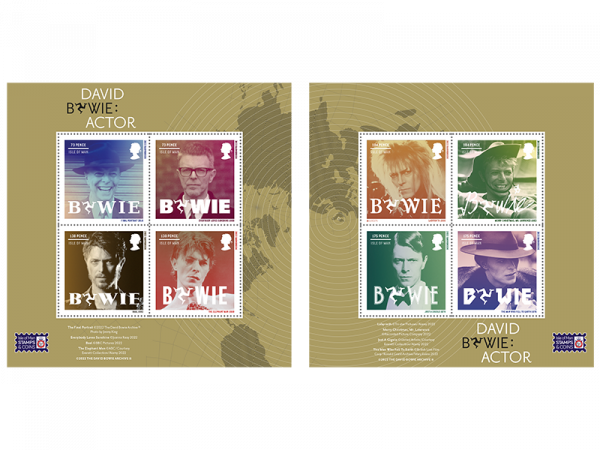 Lusciously printed, this golden set of stamp panes places the set of eight stamps in a combination unique to the booklet and is perfect for framing with each measuring 125mm square. 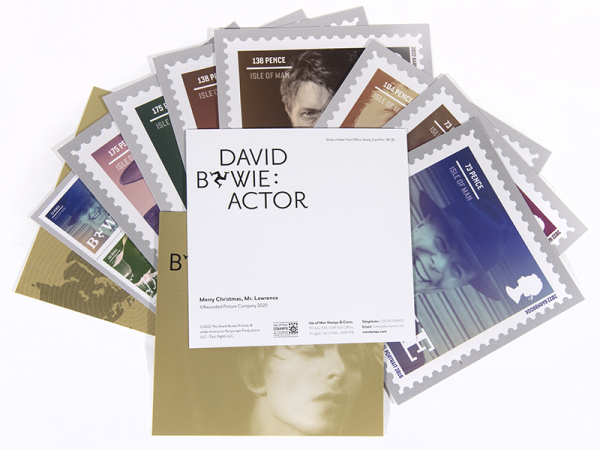 A beautiful collection of gleaming part-metallic printed cards including all eight stamp images plus the set combined on a ninth card, all held between two metallic gold cover cards with explanatory text.