A collection of twelve stamps which celebrate innovation in motorcycle engines.

The Isle of Man TT course has been recognised as the sternest test for machine and rider in motorsport for more than one hundred years. Throughout this time the cream of British engineers and manufacturers have showcased their innovative work and proved its resilience. Our stamp issue focuses on these ground-breaking engines with paintings by renowned artist Graham Crowley in combination with archive imagery from Mortons Archive, one of the greatest collections of motorcycle images in the world.

Each of the twelve First Class stamps in this collection feature a painting of a classic engine as created by Graham Crowley, a renowned painter and motorcycle enthusiast, or an image of the motorcycle in action, taken from Mortons Archive, making this a truly unique stamp collection.

Zenith Gradua Model C 1920
The Zenith Gradua was an elegant model from the 'flat-tank' era of motorcycle design. Like the products of many small manufacturers, it was fitted with a JAP engine from London makers J.A. Prestwich. In this case it was their 654cc V-twin, side-valve unit.

The term Gradua related to the fitment in Zenith early days of a form of belt-drive transmission that allowed variation in the gearing. This gave the marque an advantage over other makes that were generally fitted with a fixed gear.
Zenith and JAP combined in later years to achieve competition success at Brooklands, and also broke the world's outright motorcycle speed record at 150mph.

Excelsior Manxman 500cc 1936
Excelsior were strong supporters of racing in the 1930s and in the middle of the decade produced 'Manxman' models with 250, 350 and 500cc overhead camshaft engines, for use on the track and as fast roadsters. As usual in racing, the company's 'works' models were at the forefront of development and for 1936 the 500 shown here came with redesigned valve-gear incorporating a four-valve layout driven by the marque's customary vertical shaft and bevels, and utilising twin exhaust ports. It was built in very small numbers, although production 'Manxman' racers were plentiful and were still being used into the early 1950s.

Douglas Twin 1937
A flat twin-cylinder engine mounted fore and aft in the frame, plus a large outside flywheel, were distinguishing features of Douglas motorcycles for some 30 years. They helped to earn the company success on road and track, including a double Isle of Man TT victory in 1923 in both solo and sidecar classes. This 600cc model of 1937 was of conventional design for its time, with rigid frame, girder front-forks, drum brakes and four-speed gearbox. It appeared towards the end of production of the fore and aft engine, which was replaced by an across the frame flat twin power unit of more modern design.

AJS Supercharged V-four 500cc 1939
By the mid-1930s, popular opinion was that the dominance of racing by single-cylinder machines would soon end and that the future lay with multi-cylinder racers. AJS produced a four-cylinder, supercharged, air-cooled V-four for 1936 and by 1939 had developed it into this water-cooled version that also came with plunger rear suspension. A fine piece of engineering which developed some 55bhp, it was handicapped by being the heaviest bike on the grids of the few events it contested.

Thoughts of a post-war racing future for the AJS-four were hit by the decision of the International Motorcycling Federation to ban supercharging in 1946.

Vincent's engineering excellence came at a price, with their Twins costing almost twice as much as a big Triumph or Norton in 1949. With production costs increasing in the early 1950s and demand falling, Vincent Engineers (Stevenage) Ltd ceased building motorcycles at the end of 1955.

Norton 'Manx' 40M 1961
A true icon from the world of motorcycle racing, the 'Manx' model derived from Norton's first single-cylinder, overhead camshaft engines of the late 1920s. Powering racers in 350 and 500cc forms, they were painstakingly developed down the years to provide advancements such as increased power, better handling and improved braking and were at the forefront of world racing for several decades.

Eventually outpaced by multi-cylinder machines in the mid-1950s, the 'Manx' continued to fill the majority of race grids, long after Norton ceased building it at the end of 1962.

Today, the legend of the 'Manx' lives on in the many replica machines contesting the Classic racing scene. With a lifelong interest in motorcycles, David Wright is the author of several books on the Isle of Man TT races and also on Vincent motorcycles. He has contributed to previous Isle of Man stamp issues. Graham Crowley was born in Romford in 1950 and studied in London at St Martin's School of Art and the Royal College of Art (RCA). He has lectured in New Zealand, Canada and the USA and spent eight years Professor of Painting at the RCA until 2006. He continues painting, writing and exhibiting and has work in many public and private collections worldwide.
Graham is also a stamp collector with a particular interest in social philately.

He has been riding motorcycles for fifty years and regularly rides his 1949 Vincent Rapide, 1999 Ducati 748 and 1937 OK Supreme. He is a member of the Vintage Motorcycle Club and was a member of the TT Supporters Club for many years. He has been an enthusiastic supporter of the TT, Classic TT/Manx GP and Southern 100 races, visiting on more than forty occasions since the late 1960s.

In 2009 Ashgate published a monograph by Martin Holman entitled 'Graham Crowley.'
He currently lives and works in Suffolk. His paintings and writing can be found at grahamcrowley.co.uk

Mortons Archive
Mortons Archive is one of the greatest collections of motorcycle images in the world.
Whether it's a rider from 1937, a showroom photograph of a rare bike model, or just a highly unusual shot of a rider in action - they have it all.

The archive is often used by the national media companies looking for a bike /rider/event photograph. The archive offers literally millions of images and documents relating to motorcycles and motorcycling, thousands of which can be accessed on-line from www.mortonsarchive.com 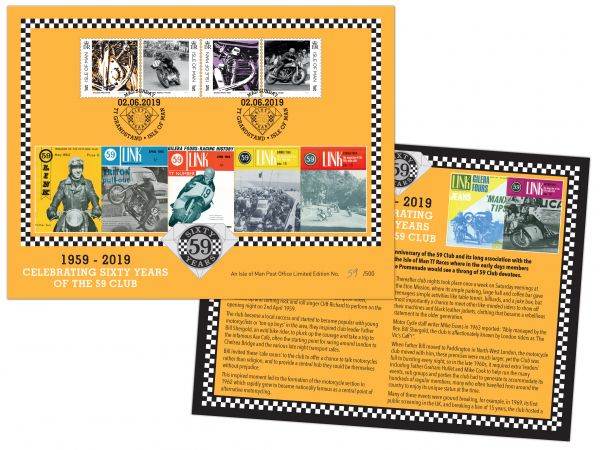 To mark the Club’s visit to the TT in their 60th year we are proud to issue this colourful, special limited edition cover. With only 500 available, each features a special postmark which is inspired by the fantastic 59 Club badge which has become an icon of British Motorcycle culture along with an insightful filler card as written by Christian Riou. 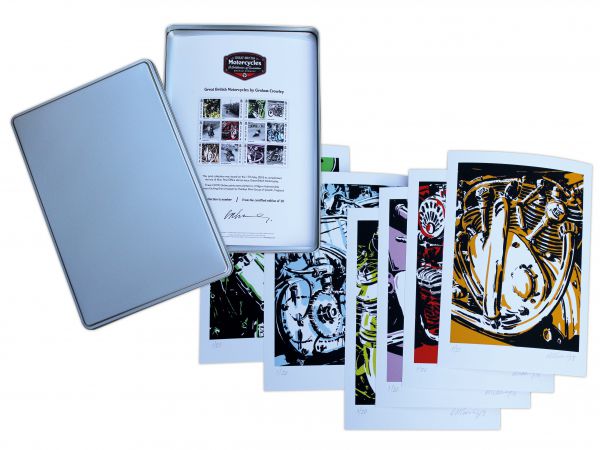 A unique opportunity to secure a set of the finest quality prints of the "Great British Motorcycles" collection.
Presented in a dedicated metal box, each individually signed and numbered by Graham Crowley.