Isle of Man Post Office is pleased to recognise the sporting and cultural significance of scootering on the Isle of Man while marking the 60th anniversary of the first Manx International Motor Scooter Rally. Our stamps feature eight aspects of this remarkable and multi-faceted festival.

The story is described by author of Scooter Mania!, Steve Jackson...
The first post-war scooter rally is believed to have taken place in 1948, essentially a camping trip in France organised by the Corgi Club. The scooter boom of the early 1950s, inspired by a cheap and accessible form of mobility, led to the formation of several clubs, openly encouraged by the Italian manufacturers.

In 1952, Vespa held a rally in Bristol followed by a national rally in Brighton the following year. In 1955, the Lambretta clubs staged their first rally, by which time rallies in all the main towns and cities of the UK had become a regular event.

The idea of an Isle of Man scooter rally first appeared in the Isle of Man Examiner on 26th October 1956. Mr JM Cain, candidate for East Douglas in the forthcoming election, made the suggestion, along with postponing the TT motorcycle race week until later in June, and the setting up of a commission to look at travel to and from the Island with a view to increasing the numbers of visitors. He believed that a scooter rally would be a big attraction, because of the opportunity to compete over the TT course, and that it would give all the entertainments a full two weeks of trade. He also suggested the revival of the Highland Gathering, which had been successful before the war.

After the success of the inaugural Isle of Man National Scooter Rally, MHK JM Cain led a delegation on behalf of the IOM Tourist Board to visit Germany and Austria with a view to expanding the event on the lines of similar rallies in Europe. As a result, the event went international, for which Lambretta organised a publicity display on the Island. Former TT rider and Motorcycling Road Champion Freddie Frith was amongst the competitors. The event grew in size and stature, attracting competitors from as far afield as Rhodesia, Czechoslovakia, India, Sweden and Italy.

In addition to the gruelling endurance events over the TT course, closed road racing was added by 1960, along with hill climbs, scrambling events and circuit racing. The Rally was also complemented by fun and games at Onchan Park alongside Concours D'Elegance competitions and glamour events such as the crowning of the Rally's Scooter Girl. It has to be said that female riders were also involved in the competitive events, one of the most successful being Elizabeth Smollen from Poland.
In 1963, TT rider Eddie Crooks entered the fray in the year that his wife Pauline was crowned Scooter Girl. In 1965, Vespa and Lambretta returned to the fold, leading to a record number of competitors and spectators, including an eleven-strong team from Sweden.

The event was cancelled in 1966 due to the seamen's strike, but was back in '67 with Geoff Duke waving off the Manx 400 event around the TT course, and the instigation of a night trial and the Ramsey Sprint along the promenade.
The peak of the event's popularity was 1968, with the sand racing on Douglas beach attracting huge crowds. Major changes to the structure of the Rally took place in 1970 and in 1971, Bill Quayle, chairman of the IOM Tourist Board, declared the event as 'the most important cog in the mosaic of Manx tourism,' although the organisers of the TT may have disagreed!

The turn of the decade saw the arrival of amateur teams that had tuned their own machines, increasing the stature of the out and out racing events, leading to fierce competition and accusations of 'professionalism' by some local competitors competing on stock machines. By 1973, records were being smashed and the Rally had now become a real speed event, with results now counting towards the Federation of British Scooter Clubs National Championships. Neville Frost smashed the six minute barrier for the Druidale circuit by nearly 11 seconds.

As the popularity of scooters declined in the early 1970s, light motorcycles were invited to join the event in order to bolster the numbers in 1974. Unbeknown to competitors, the Rally held between the 11th and 18th September 1976 was to be their last. The Druidale circuit record was retained by a scooter, despite the introduction of motorcycles in 1974. The decision to end the event was taken later in the year, as it was decided to end the event on a high, despite a petition held by would-be competitors.

In 1981, following trouble at scooterist gatherings in the UK, the Isle of Man Executive Council called an emergency meeting and imposed a ban on scooters coming on to the Island, with the Steam Packet Company and Sealink being told not to embark any scooters without Manx registrations. The restrictions of visiting scooters, certainly in large groups, remained in force until 2002. The Isle of Man Scooter Rally has now been revived as a bi-annual social event, still drawing crowds of scooterists of all ages; long may it continue. 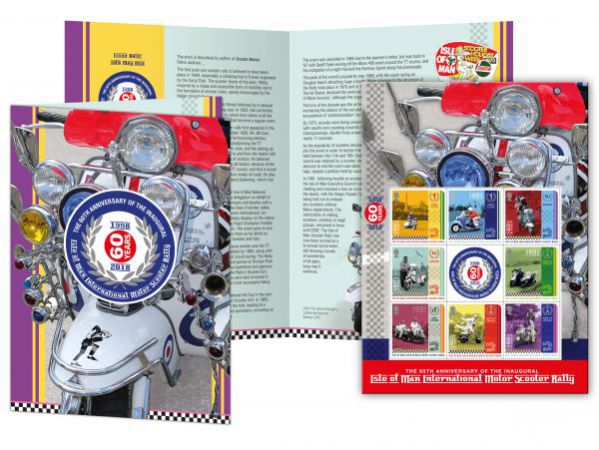 Commemorate the 60th Anniversary of the Inaugural Isle of Man International Motor Scooter Rally with this special anniversary, limited edition sheetlet, featuring aspects from this remarkable and multi-faceted festival. 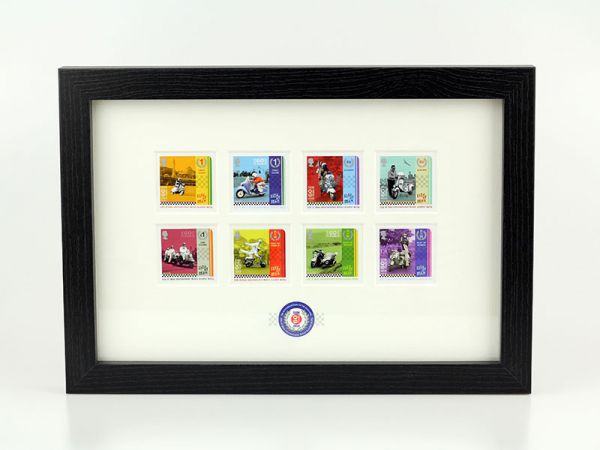 This premium collectible features the eight mint stamp collection from the Isle of Man International Scooter Rally issue, beautifully mounted ready for you to hang on your wall.