Celebrating the splendour of the Isle of Man’s Victorian railways

Essential for collectors and railway enthusiasts, this splendid set of six stunning stamps captures a golden age of travel with a series of tourism poster-style designs paying tribute to the Isle of Man's unique Victorian railways. This issue is the perfect celebration of the 140th anniversary of the Isle of Man Steam Railway and 120th anniversary of the Manx Electric Railway, which both fell in 2013.

Wonderful images of steam trains and electric trams feature on this highly collectable issue, which celebrates the history of the Isle of Man's unique Victorian railways.

Each of the six stamps features a design which draws inspiration from the popular tourism posters of yesteryear, ensuring an exclusive look which every collection should have.

Available to purchase in sheets, as a First Day Cover and in the beautiful Presentation Pack, this celebratory issue is an affordable collectable for all collectors, railway enthusiasts and anyone who wants to remember a golden age of tourism in the British Isles.

The issue was released to mark two important anniversaries for the Isle of Man – 140 years of the world famous Steam Railway and 120 years of the Manx Electric Railway. The railways retain an enduring popularity with visitors and locals alike, with packed carriages today harking back to the Victorian era when tourists flocked to the Isle of Man to ride the rails.

The network which once stretched across the Island is smaller today, but you can still travel from the capital, Douglas, south towards Castletown and Port Erin and north to Laxey and Ramsey – not forgetting the unique opportunity to climb aboard a tram which runs to the summit of the Island's highest peak - Snaefell.

The poster designs featured on the six stamps in this issue make use of photography by David Lloyd-Jones, the acclaimed Isle of Man-based railway writer and photographer. 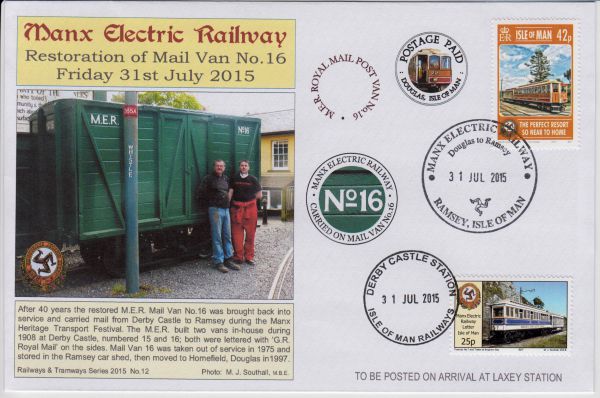 Railway Mail Van No.16 was brought back into service and carried mail from Derby Castle to Ramsey, and from Ramsey to Laxey, during the Manx Heritage Transport Festival. The M.E.R. built two vans in-house, numbered 15 and 16, during 1908 at the Derby Castle depot. The two vans were subsequently lettered with ‘G.R. Royal Mail’ on both sides. Mail Van 16 was taken out of service in 1975 and stored in the Ramsey car shed, then moved to the old Homefield Bus Depot in Douglas in 1997. 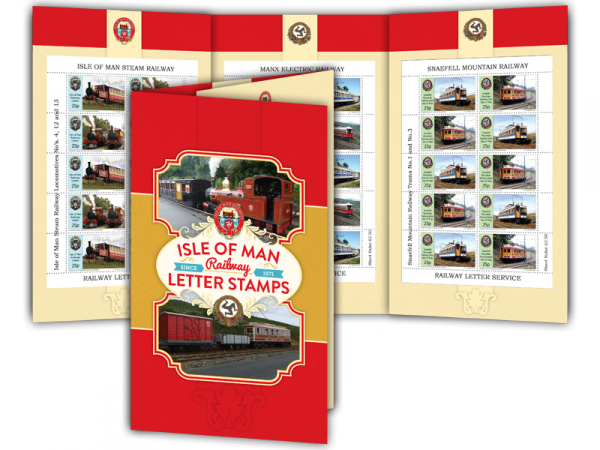 To celebrate the 'Year of the Railways', Isle of Man Post Office is pleased to present, in collaboration with M. J. Southall MBE, four official 25p Steam Railway and four Manx Electric Railway (Tramway) stamps, each printed in sheetlets of 10 (5 x 2), depicting Manx stream locomotives one for the Steam, Electric and Snaefel Mountain Railway.