John Ruskin – There is no wealth but life

Celebrating one of Victorian Britain’s most influential figures.

Isle of Man Post Office is pleased to issue this set of six stamps in celebration of the life and legacy of one of Victorian Britain’s most influential figures, John Ruskin. The Guild of St. George; set-up by Ruskin 150 years ago, played a pivotal role in the history of the Laxey Woollen Mills, a Manx institution that continues to practice traditional crafting methods to this day.

John Ruskin was the leading English art critic of the Victorian era, as well as an art patron, draughtsman, water-colourist, philosopher, prominent social thinker and philanthropist. He founded The Guild of St. George charitable and Educational Trust in 1871.

Whilst on the Isle of Man, Ruskin converted a corn mill to a water-powered woollen mill, incorporating a dyeing, spinning and carding manufactory. The mills became well-known for their high quality homespun cloth, helping to preserve Manx heritage and tradition for years to come, as was originally intended by Ruskin and the Guild. To this day, the mill continues to operate in much the same way as was intended by Ruskin 140 years ago with an ever increasing emphasis on sustainability and use of loaghtan wool for its core products.

This stamp issue has been created alongside the Ashmolean Museum, Oxford - the first public university Museum in Britain. John Ruskin has a unique association with Oxford University.

Featuring topics and artworks selected in consultation with the Ashmoleon Museum, our set of six stamps spotlight the great and varied life of Ruskin, his influence on Victorian society and lasting impact on Manx culture and traditions through the Laxey Woollen Mills.

EU: Social Justice – As a great thinker, his views on social justice in the Victorian era helped to shape welfare reforms in Britain such as the introduction of a minimum wage, free school meals and universal healthcare.

Large: Artist – Featuring artwork produced by Ruskin himself, whose artwork centred on his main interests in life, nature and God. As a critic, Ruskin championed the idea of "truth to nature" which encouraged painters to closely observe the world surrounding them.

£1.82: Art Critic – Symbolising his relationship and influence upon art, he was a champion of J.M.W Turner, the great Romantic painter. Their friendship is presented upon this stamp which features Calais Pier by Turner.

£2.17: Legacy – Representing his legacy, this stamp displays Ruskin Land, an area of land in the Wyre Forest, Worcestershire cared for by the Guild of St George. This stamp encompasses the relevance of his thoughts in the modern world and the prolonged legacy of his work, hundreds of years later.

The Isle of Man Post Office wishes to thank the staff of the Ashmolean Museum for their assistance in the research and production of this issue. We are also grateful to the Guild of St. George for their contribution to this issue. 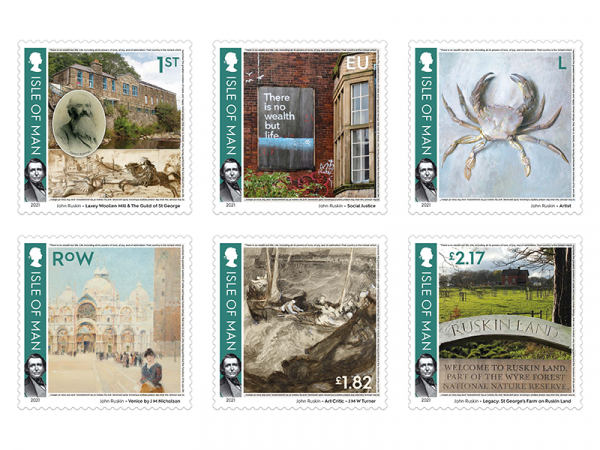 This fascinating six stamp collection spotlights the great and varied life of Ruskin, his influence on Victorian society and lasting impact on Manx culture and traditions through the Laxey Woollen Mills. 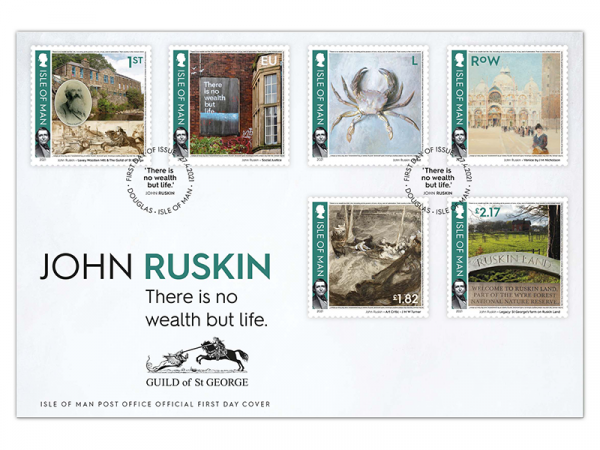 A complete set of stamps celebrating the life and legacy of one of Victorian Britain’s most influential figures, John Ruskin can be found on the front cover of this deluxe envelope. The stamps are cancelled with a special first day of issue postmark. 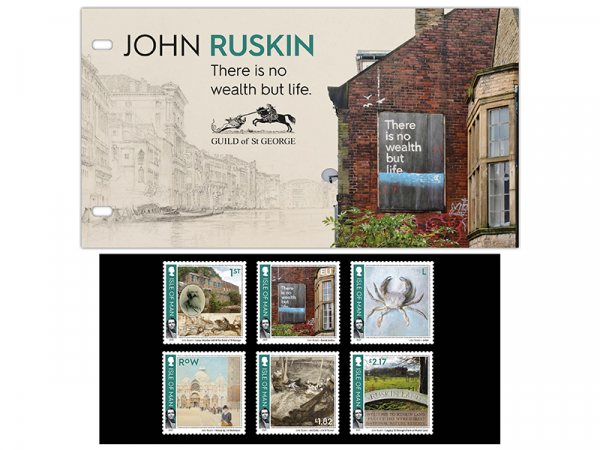 A street poster from Walkley, Sheffield featuring the famous quote of John Ruskin 'There is no wealth but life' features on the cover of this four page glossy folder.