A six stamp collection in collaboration with Isle of Man Railways

The Isle of Man Post Office is pleased to present a set of six stamps chosen from an open photographic competition, in collaboration with Isle of Man Railways, to showcase images which enthusiasts felt best represented the Manx Electric Railway.

David Lloyd-Jones writes...
The unique 3ft (914mm) gauge Manx Electric Railway is a pioneering inter-urban tramway, operating a fleet of vintage 500 volt DC tramcars. The oldest passenger tramcars date from 1893 and the newest from 1906. They operate a scenic 17 ¾ mile (28.5 km) route up the Island's rugged east coast from the capital Douglas to Ramsey town in the north of the Island.

The story of the Manx Electric Railway (MER) starts in the late 1880s, with a proposal to build a holiday camp at Howstrake, north of Douglas incorporating an electric tramway link. Construction and operation of the original 1¾ mile (2.8 km) long tramway was a testing ground for a line through to Laxey.

The first section opened on 7th September 1893, operated for 19 days and carried over 20,000 passengers. Following the initial success, the line was extended to Laxey the following year, opening on the 28th July 1894.

The next extension from Laxey to Ramsey was completed as far as the outskirts of Ramsey, opening on the 2nd August 1898. It wasn't until the 24th July the following year the line reached Ramsey town itself, following the construction of an impressive 200ft (61 metres) long viaduct crossing the deep gorge at Ballure Glen.

The first section of the line was constructed by the Douglas Bay Estates Ltd., acquired by the Douglas & Laxey Electric Tramway Co. Ltd. which changed its name to the Isle of Man Tramways & Electric Power Co. Ltd. (IoMT&EP). The IoMT&EP was forced into liquidation in 1900 following a bank collapse. In 1902 the tramway was purchased from the liquidators by the Manx Electric Railway Co. Ltd.

The MER's fortunes mirrors the Isle of Man Railway, with its golden years in the early 1920s, motor bus competition in the late 1920s, poor returns during the two World Wars and a post war decline due to cheap foreign package holidays. By the late 1950s the MER was in trouble and was acquired by the Isle of Man Government in 1957. The MER, under government ownership, has survived, despite a brief closure of the Laxey to Ramsey section in the late 1970s, which soon re-opened due to public pressure.

The MER's historical rolling stock today includes two of the original three tramcars dating from the opening of the line in 1893 and are in regular use today. MER No. 1 & No. 2 design predates traditional tramcar designs with their distinctive boxy bodies and open driving ends.

Today, the MER is still reliant on the tourist trade. A lot of money has been spent over the last couple of decade on the MER with major rolling stock, track and infrastructure renewals to bring the system up to modern standards. Despite these changes, a ride on the MER today is like stepping back in time to a Victorian age, when the horse was the king of the road, and the pace of life much slower. 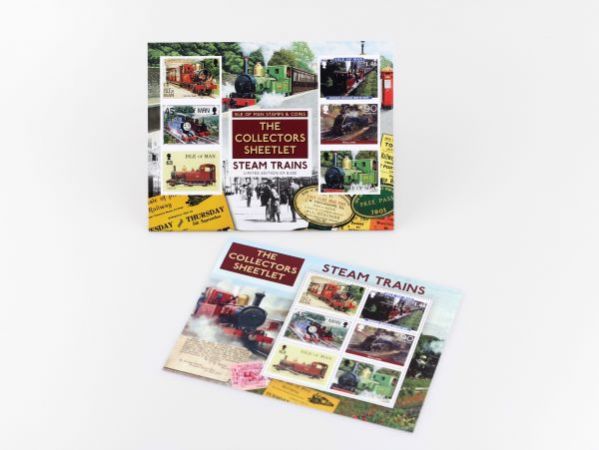 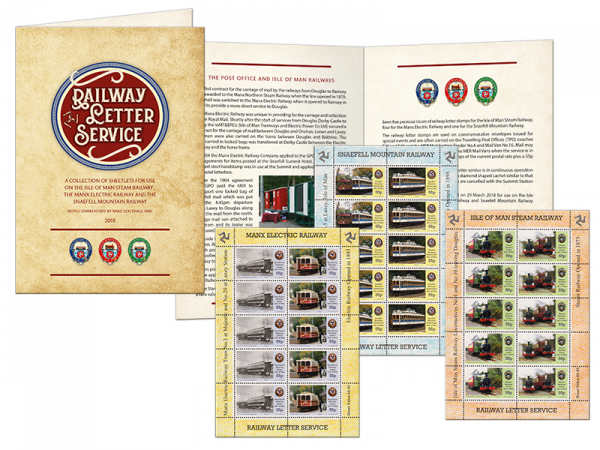 To celebrate the 125th Anniversary of the Manx Electric Railway, Isle of Man Post Office is pleased to present this special stamps folder, in collaboration with M. J. Southall, MBE

A set of six stamps chosen from an open photographic competition, in collaboration with Isle of Man Railways, to showcase images which enthusiasts felt best represented the Manx Electric Railway. 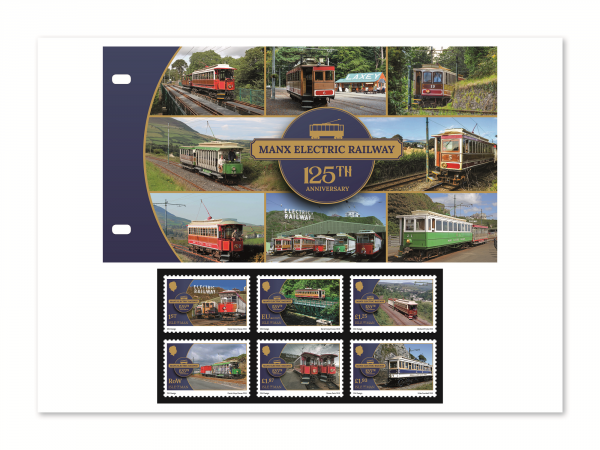 Packed with wonderful imagery and fascinating text, this presentation pack is the perfect way to commemorate the Manx Electric Railway on their 125th year. 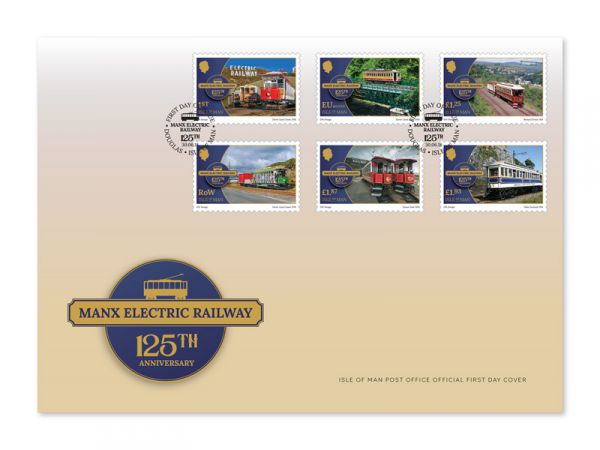 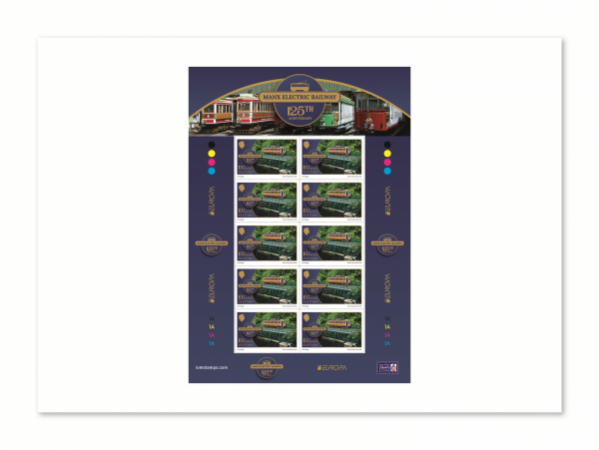 This special sheetlet features 10 of the Europa 2018 stamps which celebrates 125 Years of the Manx Electric Railway. 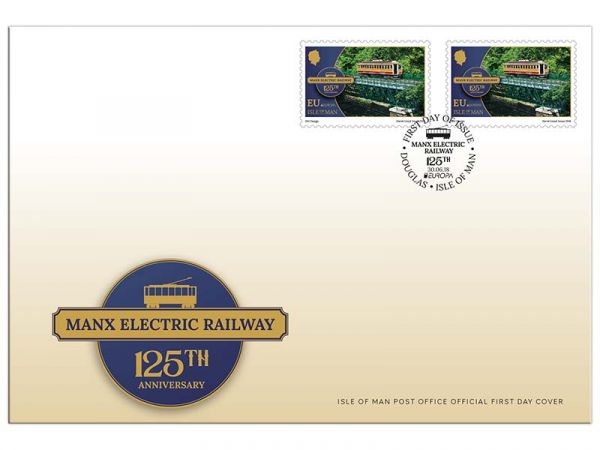 This special first day cover features two of the Europa 2018 stamps, cancelled with date of issue for which this year's theme is 'bridges.

* Please allow 14 days from date of order for dispatch 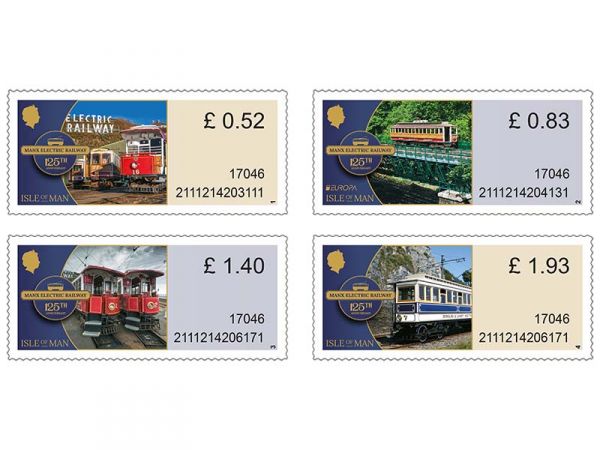 We are delighted to issue our second variable value self-adhesive stamp collection. 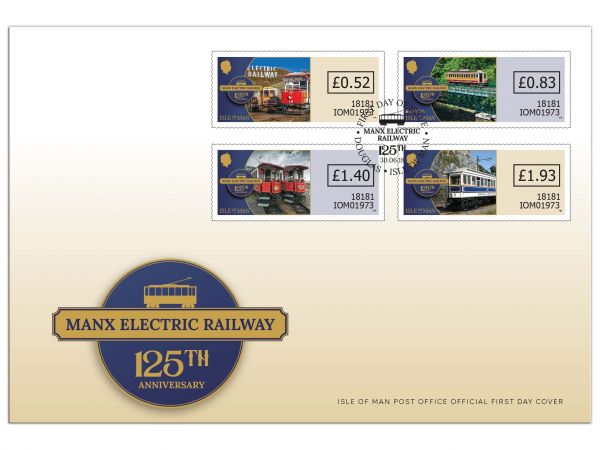 The full set of the Manx Electric Railway 125th Anniversary Definitives stamps are displayed beautifully on this luxurious envelope.