Marking the centenary year of our Island’s national museum, the Manx Museum, we present this set of stamps inviting you in to the riches of Manx history. Showcasing a range of artefacts from the museum's MUSEUM 100 exhibition, you are invited to join us in delving into our social, natural and archeological history through the images included within the collection.

An exhibition marking the centenary of the Manx Museum, MUSEUM 100, will officially open on Saturday 22 October 2022 and will run until October 2023. If you're on the Isle of Man, the Manx Museum is open daily 9:30am – 4:30pm. For more information click here

First opening its doors in November 1922, the Manx Museum is the Isle of Man’s national museum and hosts an engaging and inspiring range of artefacts, all telling the stories of the rich history of our Island.

To mark the 100th year of the museum, we are pleased to issue this set of ten stamps in celebration.

The stamps show a selection items from the museum’s MUSEUM 100 exhibition, opening in October 2022. We are proud to be able to include a range of items from this exhibition across the ten stamps, from motor vehicles to taxidermy to sculptures. The images chosen show you the wide range of items held in the archives of the Manx Museum and invite you in to explore our fascinating history and heritage.

Oldest Surviving Manx Motor Vehicle, 1911: This eight horsepower Renault car once belonged to Wilson James Ashburner, of Douglas, a gentleman of private means. He was also an artist and friend of Archibald Knox. It was Knox’s father, an engineer, who maintained the vehicle. The engine still starts and would have had a maximum speed of around 35mph.

Carmine-Red Definitive Stamp: Prior to postal independence in 1973 the General Post Office was in control of all post and telecoms for the Isle of Man. The image shows a Carmine-Red regional definitive stamp issued on the 8th June 1964. All regional definitives were invalidated for postal services on the 1st March 1972 when decimal values were introduced. This stamp depicting Queen Elizabeth II Lord of Mann was commonly used for posting mail off the Isle of Man.

‘On the Beach at Douglas’ by William Hardie Hay, 1894: This painting depicts two important aspects of a Victorian seaside holiday on the Isle of Man. The simple pleasure of playing on the beach, with the Palace Ballroom and the Derby Castle in the background, highlighting the range of evening entertainments on offer. During this period the Isle of Man was the centre of summer entertainment in the British Isles

Pygmy Shrew (Sorex minutus) Taxidermy: The Isle of Man is home to the smallest mammal on Earth, the Pygmy Shrew. They weigh four grams and have one of the fastest metabolisms of any animal, meaning they have to eat every two hours, day and night

Elephant Hawk Moth (Deilephila elpenor): Elephant Hawk-moths are named so because their caterpillars look like an elephant’s trunk and they are one of our most colourful moths, often being thought of as an exotic escaped pet. They are nocturnal and feed on flowers that are open and produce nectar at night.

King Sihtric Coin, c.AD1030: One of the earliest coins to be minted in the Isle of Man, this is a silver penny with a representation of King Sihtric, ruler of Dublin. It was buried around AD1030 with 463 other silver coins, 25 silver ingots and one silver armring. We don’t know who buried such a large amount of wealth or why. They never returned for it and the hoard lay in the ground for almost a thousand years until metal detectorist Andrew Whewell discovered it in 2003.

Rushen Abbey Floor Tile, c.AD1400: This tile was found during archaeological excavations at Rushen Abbey. Made from clay, it is decorated with a four leaf pattern and would originally have had a dark green glaze over the surface. When Rushen Abbey was first built during AD 1100s, the monks wanted to live simply, without grand buildings. But times changed and hundreds of these decorative tiles were used to pave the central areas of a large church, with an alternating dark green and cream colour scheme giving a rather sophisticated chequerboard effect.

Building Beginnings, Noble’s Isle of Man Hospital, 1886: An assembled crowd witnesses Rebecca Noble lay the foundation stone of Noble’s Isle of Man Hospital, Douglas on 26 July 1886. Using £5,000 provided by her husband, the hospital was built in the garden of Rebecca’s family home, Clifton House. The distinctive red brick building was repurposed to become the Manx Museum from 1922.

Sulby Glen Corn Flour Sign: In the later 19th century the Sulby Glen Starch Company diversified, ceasing production of starch and instead manufacturing corn flour. A striking illustration of Manx business and product advertising, the company’s starch had previously been promoted ‘As used in the royal laundry Balmoral’. The Sulby Glen Flour Mill no longer trades. 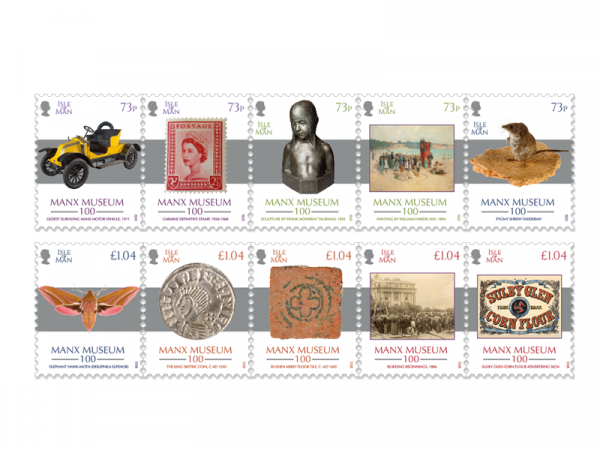 Marking the centenary year of our Island’s national museum, we present this set of stamps inviting you in to the riches of Manx history. 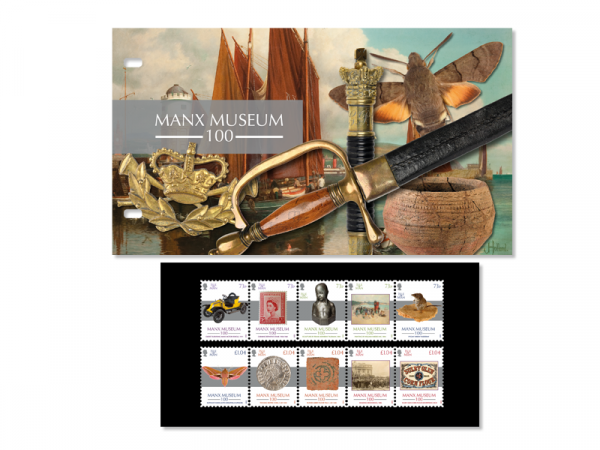 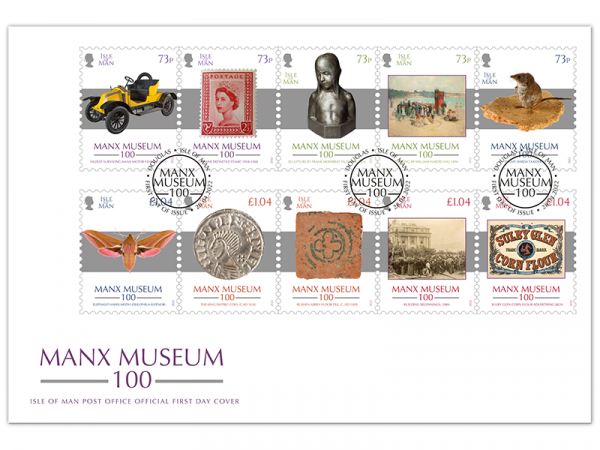 Each one of the ten stamps from this collection is presented here on the cover of this deluxe neutral envelope. The stamps are cancelled with a special first day of issue postmark and inside you will find informative issue text about the stories of the stamps. 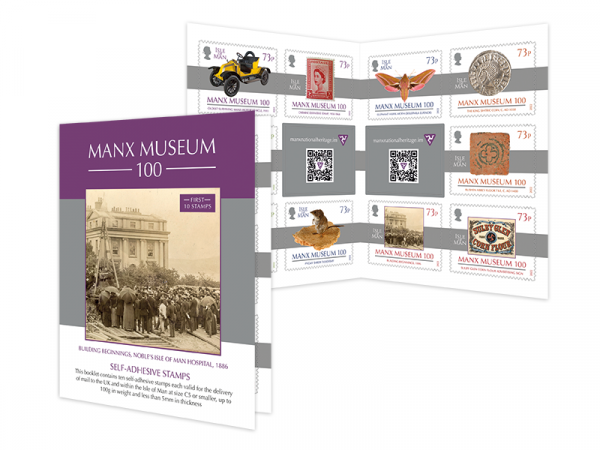 A booklet of ten self-adhesive stamps each valid for the delivery of letter mail to the UK and within the Isle of Man.