In celebration of Mensa's 75th Anniversary, Isle of Man Post Office is honoured to present a collection of six puzzling and provoking stamps reflecting the ethos of the society. Each stamp includes; a brain-teasing puzzle supplied by Mensa, a cypher, a relevant date, a post code relating to Mensa and its history, a GPS coordinate, the name of a Mensa special interest group and a W3W (What3Words), a service that allows users to view a location based purely on the three words searched.

Mensa was founded in England in 1946 by Roland Berrill, a barrister, and Dr Lance Ware, a scientist and lawyer. They had the idea of forming a society for bright people, the only qualification for membership of which was a high IQ. The original aims were, as they are today, to create a society that is non-political and free from all racial or religious distinctions. “Mensa” means “table” in Latin, and the organisation was so named because Mensa is a round-table society. Today, there are around 145,000 Mensans in roughly 100 countries throughout the world - including the Isle of Man.

Members of Mensa, both modern-day and throughout history, have played key roles in society. Uniting high IQ individuals from all over the world, Mensa members continue to have profound effects upon science, culture, politics, entertainment and many more. This organisation and its respected members have quietly solved many of the world's problems.

There are six stamps within the issue (1st, EU, Large Letter, Rest of World, USA and £2.81), with each stamp based on puzzles, the kind of brain-teasers that Mensa is known for, can you solve them all? Our stamps also contain many codes, layers of information, a cypher and references to places that are important to the organisation. In a global first, we have added what3words references to important Mensa places and locations on the Isle of Man. The app what3words is an incredibly clever way of giving a location, every 3 metre square of the world has been given a unique combination of three words.

Available in the collection is: 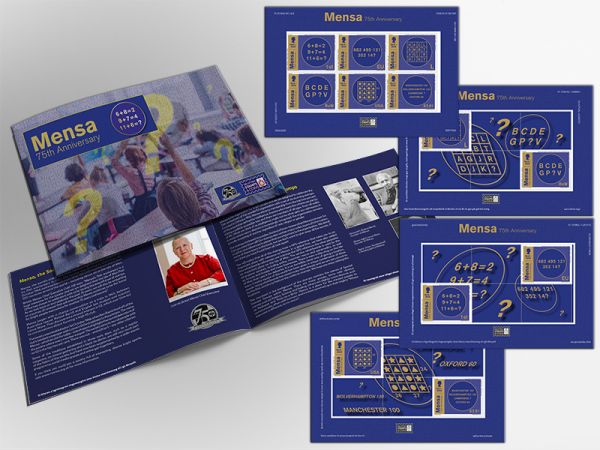 The story of Mensa on their 75th anniversary is bought to life in this 24 page full colour booklet. This booklet features two sets of these exquisite stamps, additional issue text and is a limited edition of just 3000.

For the true collector of philatelic items, we have allowed the release of a strictly limited number of these very special uncut sheets of stamps. We are releasing just 75 copies to mark the 75th anniversary of the founding of Mensa. 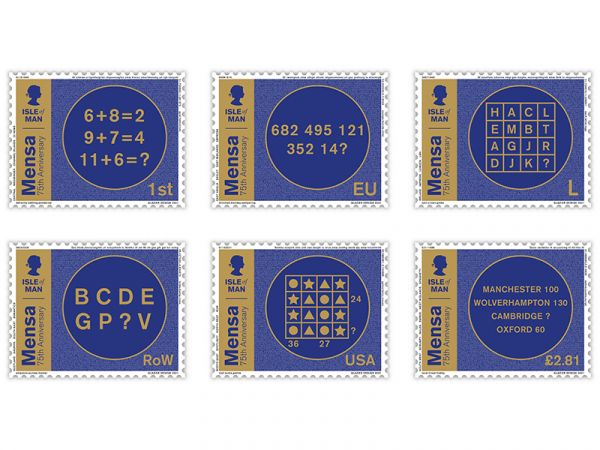 An elegant set of six stamps; each one featuring brainteasing puzzles supplied by Mensa printed in luxurious gold metallic ink. 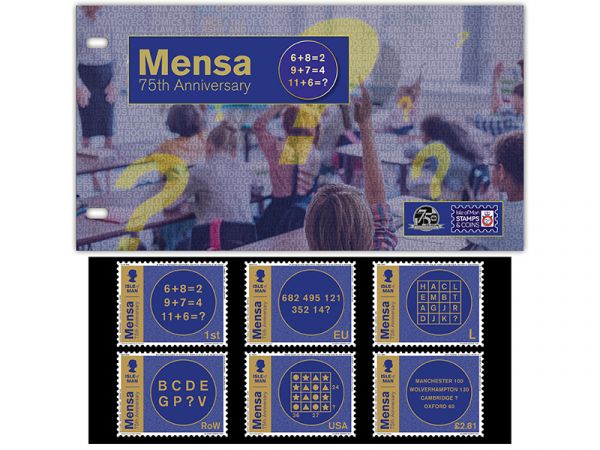 The gold metallic ink used on this puzzling and provoking set of six stamps really pops against the black mount within this four page glossy mini-folder. 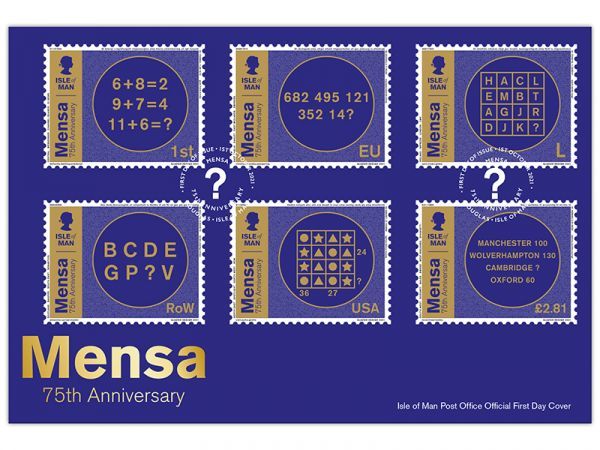 This set of elegant stamps, accented with gold metallic ink, are wonderfully displayed on this deluxe envelope and cancelled with a unique postmark dated for the 75th anniversary of the largest and oldest high IQ society in the world 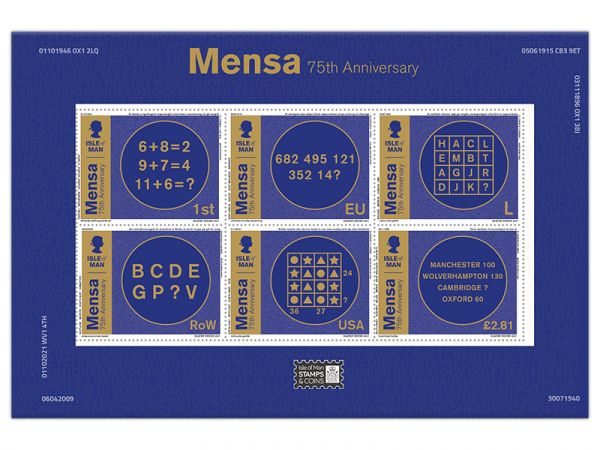 A set of the puzzling and provoking Mensa 75 stamps is presented on this decorative pane.