The Isle of Man Post Office is proud to mark the 200th anniversary of the birth of American author Herman Melville, best known for his classic novel Moby-Dick, the tale of a one-legged whaling captain's relentless pursuit of the whale that took his leg. Yet if you've not read Moby-Dick, the chances are you will not know of its Isle of Man connection... a character called 'The Manxman'.

Manx author John Quirk writes...
Whenever a new 'best 100 novels ever' list is compiled, the chances are that the words Moby-Dick will appear somewhere on that list. In a top 100 published by The Guardian, the novel was described as 'wise, funny and gripping... continues to cast a long shadow over American literature'.

The story is much more than just a crazed sailor chasing a whale. It explores race, religion, good and evil, social status, the obsession of power - often with lengthy speeches that have little or nothing to do with the plot.

But what of The Manxman? And why would Melville choose a character from, in those days, a little-known island on the other side of the Atlantic?

The Manxman is the oldest member of the Pequod's crew - he is described as 'sepulchral' - and Melville paints him as something of a mystic, a man who has 'studied signs' and who Ishmael says has 'preternatural powers of discernment'. Most sailors are superstitious folk and the Manxman's role is to wax lyrical on the omens, good and bad, facing the crew of the Pequod.

Each of the six stamps features Moby Dick along with the following characters from the book: Captain AHAB, Ishmael, Starbuck, The Manxman, Queequeg and Stubb.

Herman Melville's Moby-Dick is one of the most famous and extraordinary books ever written. How amazing to have these wonderful set of stamps from the Isle of Man to remind us that Melville, who was a great connisseur both of art and of islands, sailed many oceans, and met many people - even Manx people! This is a great way to celebrate the great American author's birth, and his strong links with Great Britain.

Philip Hoare, author of Leviathan or, The Whale 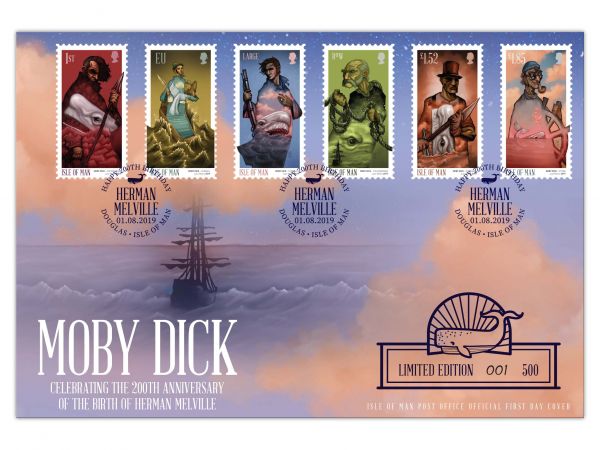 A limited edition special cover which marks the 200th anniversary of the birth of Herman Melville, the author of one of the most famous books ever written, Moby Dick. This cover features a special metallic foil overprint postmark dated 01.08.19, the official anniversary date and each is numbered by hand to show the limited number of only 500. 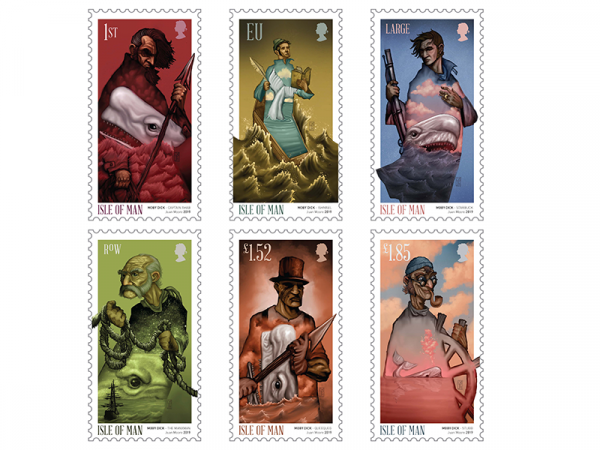 The awe-inspiring artwork for this remarkable six stamp collection has been created by Manx artist Juan Moore to mark the 200th anniversary of the author of one of the most famous books ever written, Moby Dick. 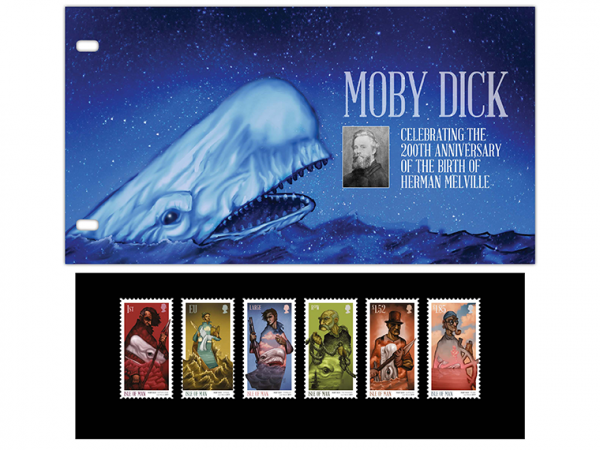 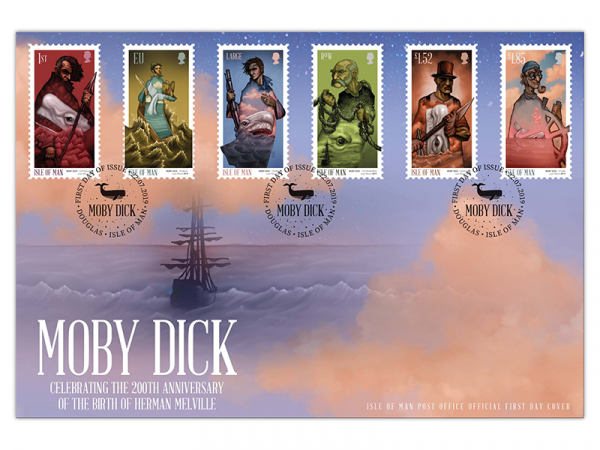 Marking the 200th anniversary of the birth of Herman Melville, this enchanting first day cover features the six stamps presented on a deluxe envelope, and cancelled with a unique postmark for the first day of issue.