O Land of Our Birth

Isle of Man Post Office, in collaboration with the Isle of Man Steam Packet Company and Biosphere IOM, is pleased to present twelve winning photographs selected from a recent competition titled ‘O Land of Our Birth’. The final choice of images reference the words of our national anthem which have stood us in good stead during the past few months and will continue to do so long into the future.

The national anthem of the Isle of Man was written and composed by William Henry Gill (1839–1923), with the Manx translation by John J Kneen (1873–1939). It is often referred to by its incipit, O Land of Our Birth.  It is sung to an adaptation of the traditional Manx melody of Mylecharaine’s March, which had been described as the “Manx national melody” long before Gill’s composition.

Created in collaboration with the Isle of Man Steam Packet Company and Biosphere Isle of Man, this issue draws inspiration from the lyrics of the Manx National Anthem, by using images submitted by individuals from across the world to showcase our Island's beauty and character.  The twelve winning entries were selected for their ability to display and promote the natural beauty of the Island whilst encapsulating the lyrics of the national anthem.

The stamps are proudly Manx and picture the natural beauty of our home, displaying strong imagery of our Island’s coastline, landscape, agriculture and beauty, proudly sharing our home upon the stamps.

Stamp 1: Taken by John Jones in June 2018, the image displays the once bustling fishing port of Port St. Mary.

Stamp 2: This stamp depicts an image overlooking the clear waters of Fenella beach, as taken from Peel Castle. The image was captured in July 2019 by Terrence Meadmore.

Stamp 3: Taken by Sarah Elliot and titled Streets of Peel, pictured is a row of traditional quaint cottages in the narrow town of Peel.

Stamp 4: Captured by Liz Lillis-Ingram at The Sound, the Islands southernmost point, this image shows the sunset over the Irish Sea, also displaying the Thousla Cross monument.

Stamp 5: The fifth stamp pictures a herd of Loaghtan sheep, a rare breed native to the Isle of Man. The image is taken by Colin Gill while visiting the Calf of Man; an uninhabited nature reserve to the south of the Island, only accessible by boat.

Stamp 6: Taken by Sue Furner while strolling along Peel Marina, this image displays several colourful fishing boats upon a backdrop of Peel Castle.

Stamp 7: Submitted by Marionette Espinosa, the photograph captures a river running through Ballaglass Glen, one of the Island’s many woodland areas.

Stamp 8: Titled "Show them the world and let them conquer it all", taken by William Hale, this stamp depicts a child exploring the Island. Taken overlooking the Sulby reservoir from the surrounding mountainous terrain.

Stamp 9:  Taken by Tim Norton and titled Ye sons of the soil, in hardship and toil, this stamp shows the agricultural heritage of the Island; displaying a farmer and his horse.

Stamp 10: Submitted by Hilary Denison, this stamp provides an artistic image of a monument alongside the Quay in Douglas. It captures the Celtic inspired monument, paying tribute to the Island’s Celtic past.

Stamp 11: Capturing the Ben-My-Chree on her entry into a peaceful Douglas bay, this image displays the shoreline of our capital. Titled Calm Arrival by photographer Craig Harriman, this image was taken in June 2019.

Stamp 12: Taken at Glen Maye beach by Gareth Caley in March 2019, this image shows the jagged coastline of Glen Maye as the wave’s crash against the pebbled beach 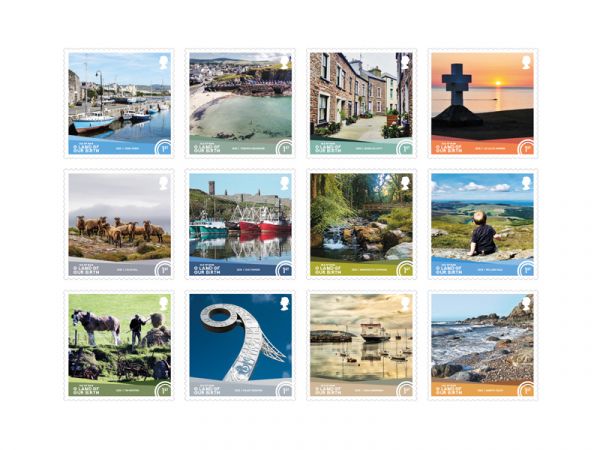 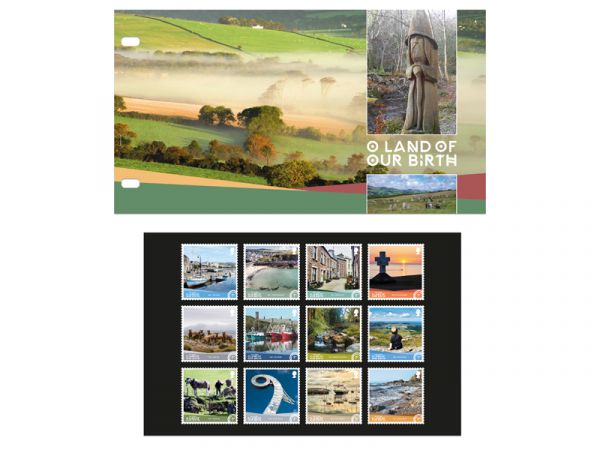 Twelve stunning images submitted as part of an open photographic competition can be found presented as a set of mint stamps on a black mount within this four page glossy folder.

Each of the twelve winning images selected to feature in this collection take centre stage on this deluxe envelope. The stamps are cancelled with a special first day of issue gold-foil postmark .