Isle of Man Post Office showcases both popular and unusual species of birds selected from the world of cage and aviary as seen through the lens of photographer Luke Stephenson.

The birds selected are new to our stamp collection and include both common and exotic varieties with one, a redpoll crossed with a bullfinch, included to illustrate an important aspect of bird fancying, that of creating hybrid cross breeds, both for their appearance and song.

It’s a great honour to have my work displayed on stamps and be among many great artists that have done so in the past. It seems very fitting that my images of birds will now literally be flying around the world. Photographer Luke Stephenson.

We are delighted to have worked alongside Luke Stephenson, a well-established photographer who has dedicated years to picturing and studying these many and varied species around Britain to issue this six stamp collection. Luke has exhibited and published his photographs widely, most notably at The Photographer’s Gallery, London and has published a book, An Incomplete Dictionary of Show Birds, from which the stamp images have been informed.

The insightful issue text has been written by Luke Stephenson along with local expert Roy Howarth, who has provided background information about the selection of species for the stamps and discusses the history of bird keeping on our Island.

The Fife Canary: One of the most popular show birds. The wild canary, a species of the Serin finch genus, was found only on the islands off the west coast of Africa: the Canary Islands, Madeira, Azores and Cape Verde Islands.

Gouldian Finch: Also referred to as the rainbow finch and named by British ornithological artist John Gould in 1844 as Amadina Gouldiae, in honour of his deceased wife Elizabeth. In the wild it inhabits grassy open woodlands across the north east of Western Australia, the Top End of Northern Territory, and parts of northern Queensland.

Budgerigar: The budgerigar is probably the most popular domestic show bird. Most commonly green and yellow this small parrot of the genus Melopsittacus is native to inland Australia where they are largely nomadic and move according to food and water availability, sometimes seen in huge numbers in suitable conditions.

Redpoll Hybrid: The redpolls are a group of small passerine birds in the finch family Fringillidae. Our specimen is the result of cross breeding with a bullfinch, an area of great interest to fanciers.

Paradise Tanager: Native to the Amazonian lowlands and much of continent, the Tangara Chilensis songbird is found in the canopy of humid forests, often in mixed-species flocks. Despite its exotic appearance it is evaluated as ‘least concern’ on the IUCN red list of threatened species.

Diamond Sparrow: Also known as a Firetail due to its distinctive shards of red upon its beak, eyes and rump. Stagonopleura guttata is an estrildid finch that is common to Australia and is found from the Eyre Peninsula of South Australia right through to the south-east of Queensland. 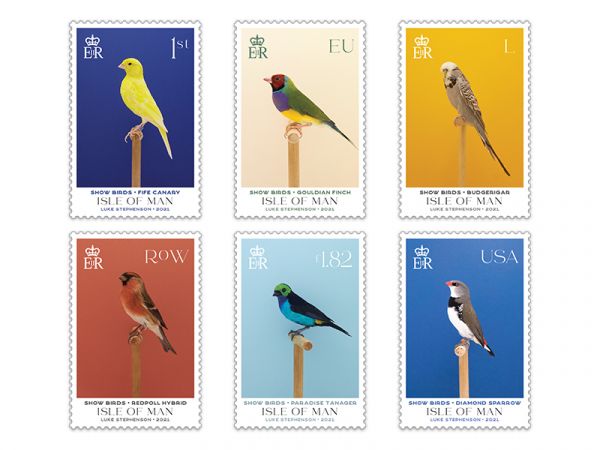 The birds selected for this astonishing six stamp collection include both common and exotic varieties and are showcased through the lens of photographer Luke Stephenson. 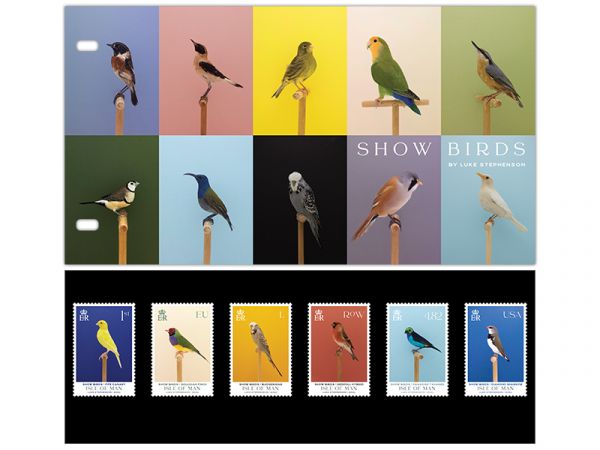 Ten show birds take centre stage on the front cover of this four page, glossy deluxe folder, each one seen through the lens of photographer Luke Stephenson. 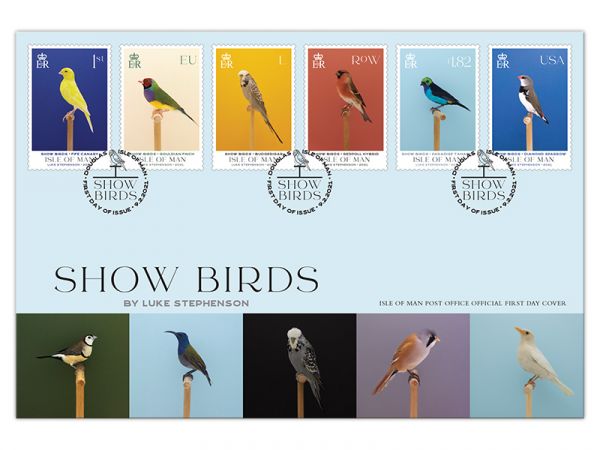 The six birds presented on the cover of this deluxe envelope include six species of show birds photographed by British photographer Luke Stephenson. The stamps are cancelled with a special first day of issue postmark.