A six stamp collection highlighting the illustrious career of the Manx engineer.

Isle of Man Post Office is pleased to showcase the illustrious career of the Manx engineer who made momentous contributions to the development of twentieth century telecommunications worldwide and who put in place the foundations of the BBC.

This fascinating six stamp collection illustrates the extraordinary career of Frank Gill who was born in Castletown in 1866 and was a global visionary telecommunications engineer. He trained at various companies throughout the British Isles and in 1890 became the chief electrician to the Liverpool District of the National Telephone Company. Here he installed the first UK automatic junction signalling equipment and was responsible for the first very large metallic circuit exchange equipment. Frank was appointed District Manager for Dublin and the South of Ireland in 1893, quickly becoming the Superintendent of Ireland in 1896. Here he supervised the designs of the new Dublin Exchange, built in 1897, and the new Belfast Exchange, constructed a few years later.

By 1902 he was appointed Engineer in Chief, where he controlled UK-wide engineering work including central battery exchanges. He controlled £12.2m of capital and revenue expenditure and introduced 2500 miles of circuits.

During WW1 Frank voluntarily became a Comptroller General at the Ministry of Munitions where he gained the OBE for his services. In 1919 he became the European chief engineer of the International Western Electric Company. By 1922 wireless telegraphy was developing rapidly and, fearing similar nationalisation seen with telephones ten years earlier, 23 equipment manufacturers met to agree a way forward to develop broadcasting (also called wireless telephony) throughout the UK.

They met at the Institution of Electrical Engineers in London under the chairmanship of the newly elected Institution President Frank Gill, where all agreed to use a smaller committee called the 'Big Six' comprising Marconi, General Electric, British Thomson-Houston, Metropolitan Vickers, the Radio Communication Company and Western Electric. The Post Offices specified the Burndept Company should join to represent the smaller partners. They met again on the 25th May and Frank ensured they discussed key matters including patents, company name, revenue and licencing fees.

Frank insisted this must become a single company, but Marconi and Metropolitan Vickers did not agree. Before a meeting on the 8th August 1922 Frank pleaded with them and the dissenters finally agreed to his request. The Big Six agreed the new organisation would be called the British Broadcasting Company (the BBC). Objective achieved, Frank withdrew as chairman to take up work with America and was replaced by Sir William Noble, who completed the structure already agreed by the Big Six with Frank.

In November 1922 at his Institution of Electrical Engineers Presidential Address (later quoted as "the greatest paper on telecommunications of the 20th century") Frank outlined far-reaching proposals for world-wide telephone equipment, standards and cooperation. He concluded:

"...In the telephone we have the most perfect means of communication... we shall be making a definite step towards... increasing the good-will without which there cannot be peace on Earth." 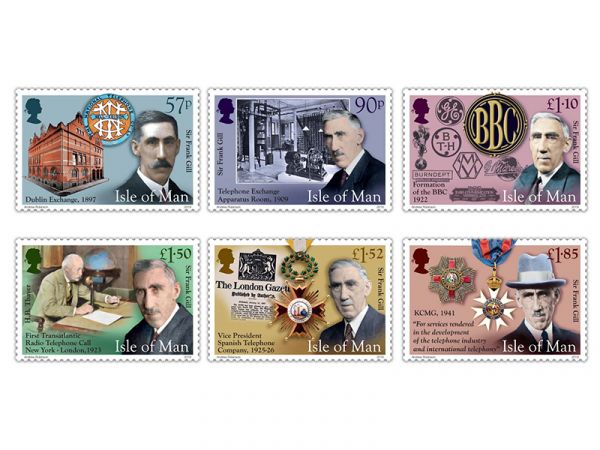 This fascinating set of six stamps highlights the career of global visionary Manx telecommunications developer and engineer who put into place the foundations of the BBC. 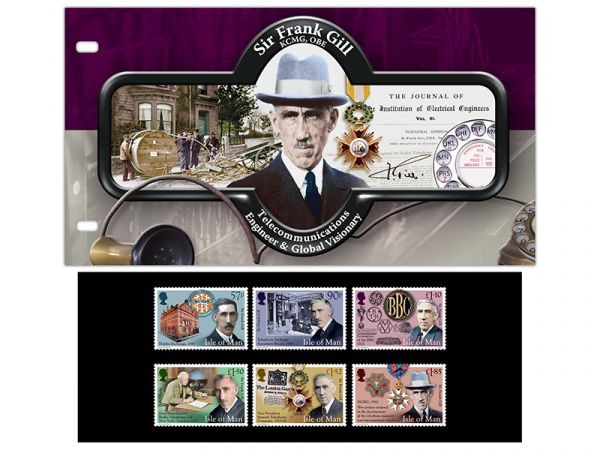 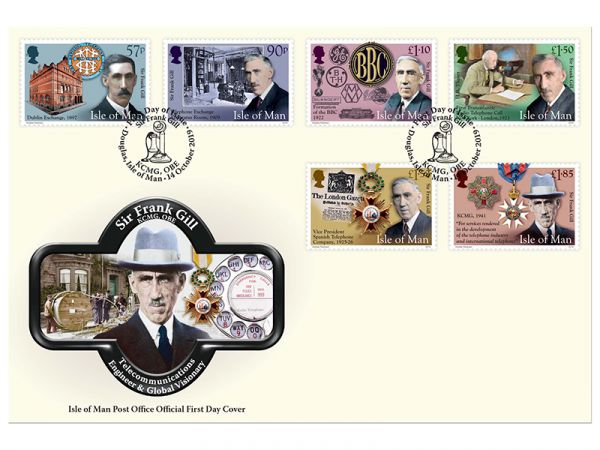 Designed by Andrew Robinson and EJC Design, this wonderful first day cover features the complete set of stamps cancelled with a first day of issue special postmark. The story of the issue is presented on a filler card inside, and is told by issue writer Robert Stimpson of the Isle of Man Victorian Society and Fellow of the Institution of Mechanical Engineers.