The 400th Anniversary of the Mayflower

Isle of Man Post Office is pleased to present a set of six stamps in celebration of the 400th anniversary of the voyage to the New World of the Mayflower.

2020 marks 400 years since the Mayflower set sail from Plymouth, UK and on to discover the New World, now known as the United States. This anniversary is of both significant historical and cultural importance and is regarded as a key moment in the development of the modern world. The ship has become a cultural icon in the history of the United States and more than 30 million people can trace their ancestry to the 102 passengers and approximately 30 crew aboard the Mayflower when it landed in Plymouth Bay, Massachusetts. These individuals would go on to greatly influence the future of the United States of America.

Four hundred years ago, 102 passengers, frequently referred to as the Pilgrims, set sail on the ship Mayflower, bound for the northern parts of Virginia, where they hoped to establish a small colony. The core of the passengers were religious Separatists that fled their English home parishes for Holland starting in 1607, due to increased religious persecution under King James I.  Over the course of the next thirteen years the Pilgrims grew a church congregation in the town of Leiden, Holland - a country where they found religious toleration.

Concerned about a potential war between Holland and Spain; worried their children were losing their English heritage and culture; and yet still unable to practice their religious beliefs back home in England, they ultimately decided to attempt a dangerous voyage to relocate their church congregation and to create a new English colony in the American wilderness. To help finance their voyage, and the first wave of colonists, they recruited like-minded individuals from a similar congregation in Amsterdam and amongst Puritan sympathizers remaining in England. Filling out the ranks were some hired hands - servants, seamen, a cooper and a militia captain named Myles Standish whose family hailed from Lancashire and the Isle of Man.

The first half of the voyage went well with prosperous winds. About mid-voyage, however, the ship began to encounter storms. During one storm the main beam cracked. During another a passenger named John Howland accidentally fell overboard, but he was successfully rescued.  Two people died on the voyage - one passenger and one crew member.

The Mayflower passengers had a patent to settle in Northern Virginia, around the mouth of the Hudson River in modern-day New York. However, they ended up arriving at Cape Cod in New England, and their attempt to sail south ended in a near shipwreck. The adult men drafted and signed a document, on 11th November 1620, that has come to be known as the Mayflower Compact. In the Compact, all the adult men agreed to establish their own elective government and be obedient to its authority. The Mayflower Compact is one of the foundational documents of American democracy.

After more than a month of exploration, the Pilgrims came ashore at Plymouth in December 1620, and decided to settle and build their plantation on that location. They built their first common storehouse and their first houses. Although they had encountered some native peoples during their explorations on Cape Cod, they did not have any interactions throughout the winter months as they built their colony. In March 1621, the Wampanoag sent a visiting Abnaki named Samoset, who knew some English from the fishing vessels that visited of the coast of Maine, to understand the colonists’ intentions. He coordinated a meeting between the Pilgrims and the Wampanoag leader Massasoit Ousemequin, introducing another English-speaking native named Tisquantum, or “Squanto”. The two made a peace agreement and mutual aid pact.

In the autumn of 1621, the Pilgrims brought in a small harvest of Indian corn, barley and peas, and made fishing voyages to supplement their food stocks. Joining with sixty Wampanoag who brought five deer, the two groups feasted, competed, celebrated and gave thanksgiving for three days; an event that is commemorated today as the U.S. holiday of Thanksgiving on the fourth Thursday of November. 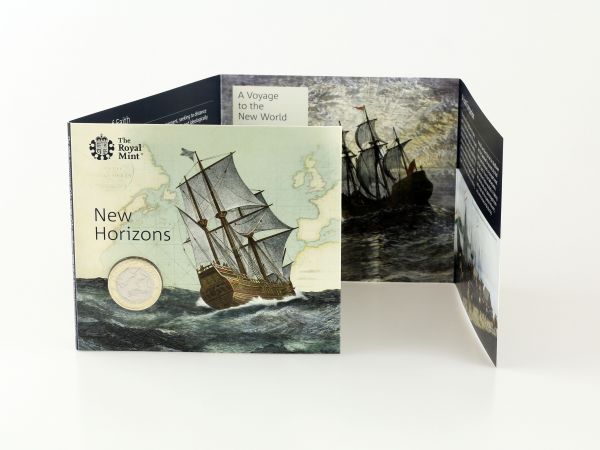 We are proud to mark the 400th anniversary of the voyage of the Mayflower with this £2 coin produced by The Royal Mint, UK.