The 70th Birthday of Prince Charles

A collection in collaboration with the Royal Society of Portrait Painters

The Isle of Man Post Office is delighted to present this set of six stamps featuring the work of four eminent portrait artists of our time who have painted HRH Prince Charles. We are indebted to the Royal Society of Portrait Painters for their help in compiling material as we celebrate the 70th birthday of the Prince. 2018 also sees the 60th anniversary of HM Queen Elizabeth II conferring on Prince Charles the title Prince of Wales on 26th July 1958, some six years after he became the heir apparent. The 14th November 2018 marks the 70th birthday of His Royal Highness Charles, Prince of Wales, the eldest son of Her Majesty Queen Elizabeth II.

Prince Charles, was born at Buckingham Palace in 1948 and is heir apparent to the British throne. As such he holds many titles, including Duke of Cornwall, Duke of Rothesay, Earl of Carrick, Earl of Chester, Baron of Renfrew, Lord of the Isles and Prince and Great Steward of Scotland. He is father to Prince William, Duke of Cambridge, and Prince Harry , Duke of Sussex.

His Royal Highness has achieved great recognition as an environmentalist, for his views on the dangers facing our planet from climate change, as a proponent of organic farming and as a regular commentator on architecture and building conservation.

Through many years of service to our great nation and the nations of the Commonwealth, Prince Charles has consistently acted as a humanitarian, with his tireless support of countless charities as well as The Prince's Trust and the sixteen other charities he has started. He will take over as head of the Commonwealth when Her Majesty the Queen leaves the role.

As well as being a champion of many arts charities and organisations, His Royal Highness is an accomplished watercolour artist and has published several books on the subject.

We have chosen to represent His Royal Highness through portraiture. The paintings have been created by a variety of artists.

Founded in 1891 for the promotion of portraiture, the Royal Society of Portrait Painters - www.therp.co.uk  is run by the leading portrait painters of the day. It works with artists around the world to support this ancient art form. The Society's annual exhibition is held at Mall Galleries, where those wishing to commission a portrait can also access a year-round consultancy service. 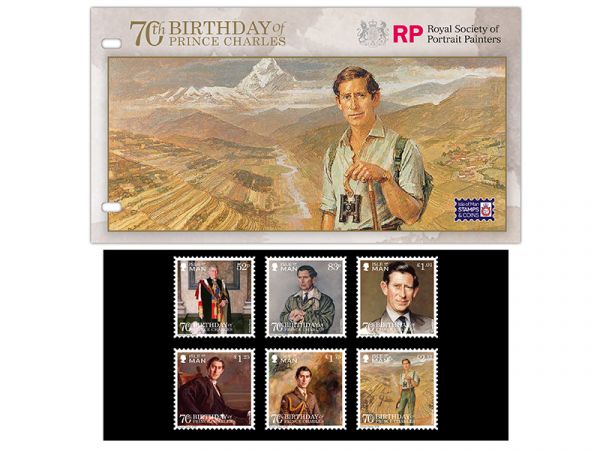 All six stamps released to celebrate the 70th Birthday of HRH Prince Charles are contained inside this four-sided mini-folder. 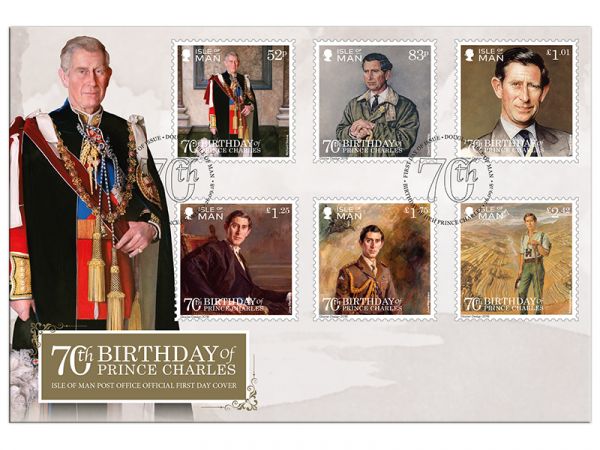 The full set of stamps for the 70th Birthday of Prince Charles sit beautifully on this decorative envelope. The stamps on this cover are cancelled with a unique postmark for the first day of issue. 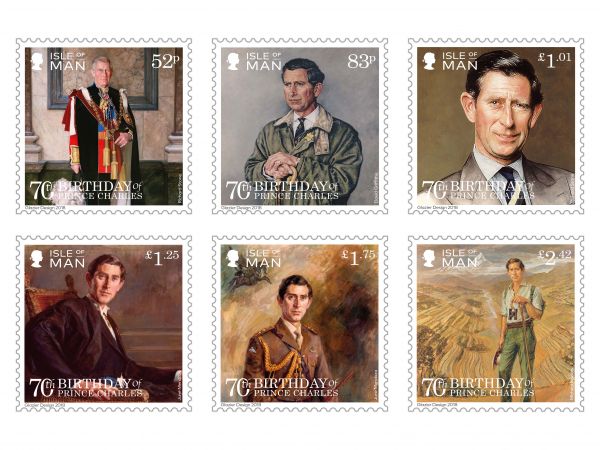 The 70th Birthday of Prince Charles Set and Sheet Set

We have chosen to represent His Royal Highness on this stamp collection through portraiture. The six selected paintings have been created by a variety of artists.
Set available in Mint and CTO