Isle of Man Post Office proudly presents a set of ten stamps which celebrates the environmental and historical importance, unique character and outstanding natural beauty of this precious tiny island at the southern tip of the Isle of Man.

The issue spotlights aspects of the wide-ranging expert conservation stewardship of Manx National Heritage in the 70th year since the Calf of Man was taken on by the Manx National Trust. The Calf's nature conservation has made a significant contribution to the Isle of Man’s designation as a UNESCO Biosphere.

The stamps form our postal issue for 2021 as well as our Europa stamp entry for which this year's theme is 'Endangered National Species'.

Isle of Man Post Office would like to dedicate this issue in memory of Dr Trevor Norton (Sheffield, 1940–Isle of Man, 2021), formerly Professor of Marine Biology at Liverpool University and Director of the Port Erin Marine Laboratory, Isle of Man (1983–2005). He was a long-serving, well-respected and supportive Trustee of Manx Museum and National Trust and served as trustee from 1984 to 2012.

This beautiful set of ten stamps spotlights a variety of aspects of the Calf of Man with special emphasis on the conservation work of the Manx National Trust to mark the 70th anniversary of its foundation.

1st: Calf of Man Nature Reserve (Peter Killey) – This stamp introduces the Calf as seen from the southern tip of the Isle of Man at The Sound, a popular tourist destination.

1st: Sea Transport (Mike Radcliffe) – The Calf Attending Boat. An integral lifeline to the Island, the transportation of people and supplies by sea is vital. The late Juan Clague, his son and dog are featured. Juan was a well-known and much-loved character who dedicated much of his life to the Calf attending service which is continued by his son Steve.

1st: Crucifixion Stone (MNH and Paul Corrin) – An internationally important ancient artefact and central to the Manx National Heritage National Collection. Carved by Celts in slate around the 8th century, the stone was discovered in the 1770s during the building of farm walls and is now displayed at the Manx Museum.

1st x 2: Calf of Man and Wart Bank Nature Reserve (Mike Radcliffe & Dr Lara Howe )– A popular home to marine life, seals are often found along the coastline of the Calf and are a well-loved spectacle to many Manx residents. Seal monitoring has been conducted by Manx Wildlife Trust volunteers on an annual basis since 2009.

The water quality is also closely monitored and a greater abundance of sea life is being reported such as the lion’s mane jellyfish pictured in our stamp.

EU: Manx Shearwater Recovery Project (Kevin Scott) - Manx National Heritage runs a number of projects to safeguard the natural world and in particular the bird life – the Manx Shearwater being so named as it was most plentiful here. As ground and night nesters they were losing their eggs to brown rats, so efforts have been made to reduce the brown rat population. The rat has not been completely eradicated but the Shearwater has responded with a very encouraging increase in breeding numbers.

EU: Infrastructure (Mike Radcliffe) – The dry-stone walling is a prominent feature of the landscape of the Calf, with work ongoing to restore and rebuild walling. The distant Chicken Rock lighthouse can also be seen on this stamp.

EU: Flora (Hannah Ehlers) -  The Calf offers many beautiful species of flora, and this pink thrift, blossoming in late spring, is of particularly attractive while being hardy to saline air.

EU: Insect Conservation (Dr Lara Howe) – The Calf is home to some rare species of butterfly and moth. Moth trapping is conducted on the island, and the Calf has been responsible for the identification of several new species in recent years. This stamp highlights the Garden Tiger Moth.

EU: Calf of Man Bird Observatory (Shaun Murphy and Mike Radcliffe) – The observatory opened in 1959 and was formally accredited in 1962. It now focuses on seabird breeding:  numerous gull species. The Calf’s population of loaghtan sheep helps to maintain the habitat in a condition that is beneficial for the breeding population of chough on the Calf.

We are very grateful to Shaun Murphy and Dr Erica Spencer of Manx National Heritage and Dr Lara Howe of Manx Wildlife Trust for their invaluable expert assistance. 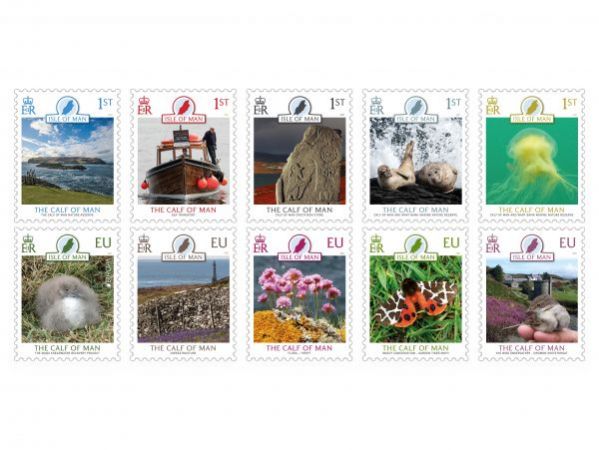 The Calf of Man Set and Sheet Set

A set of ten stamps celebrating the 70th anniversary of the founding of the Manx National Trust, beautifully depicting the unique character and outstanding natural beauty of this tiny island at the southern tip of the Isle of Man. 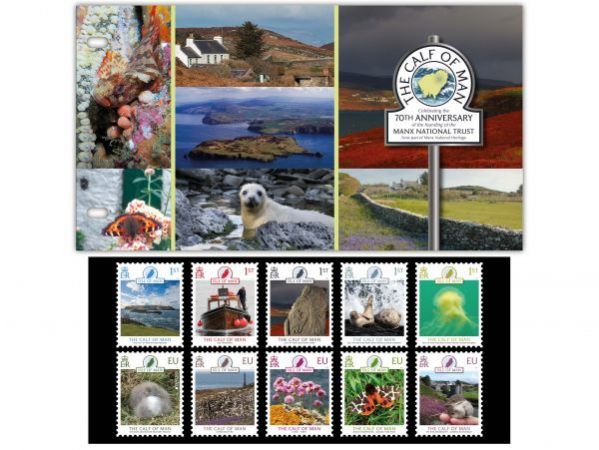 The Calf of Man Presentation Pack

The complete stamp set is beautifully presented on a black mount inside this four sided, glossy collectors folder, reflecting the natural beauty, environmental and historical importance and unique character of this precious location. 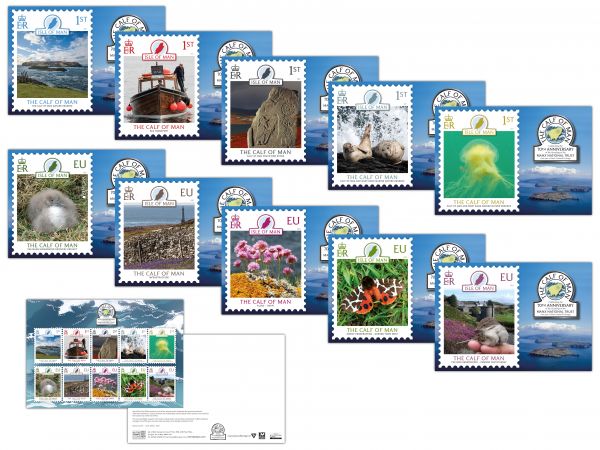 The Calf of Man Stamp Cards

A perfect set of ten stamp cards, ready to add your postage and send to anywhere in the world! Each design features an enlarged version of one of our ten Calf of Man stamps, next to a birds-eye view of this beautiful Island. You will also receive a complimentary card featuring a collage of all ten designs. 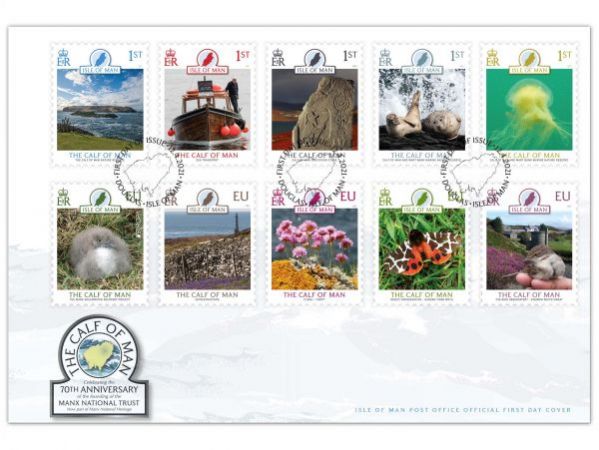 The front cover of this beautifully detailed deluxe envelope features a full set of all ten stamps, cancelled with a specially designed first day of issue postmark. 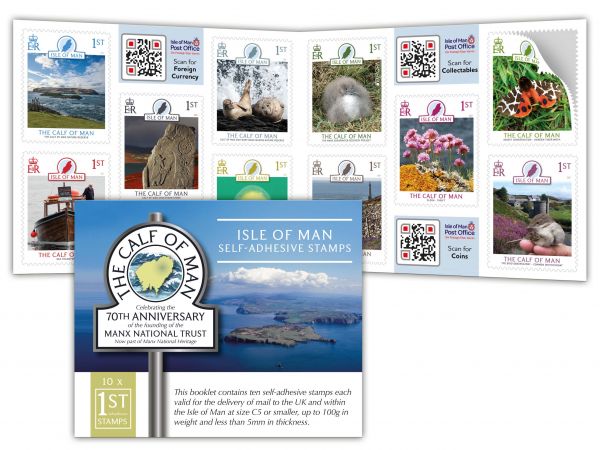 The Calf of Man Self Adhesive Booklet

A wallet-sized booklet of ten self-adhesive stamps each valid for the delivery of letter mail to the UK and within the Isle of Man.


This item is currently out of stock. 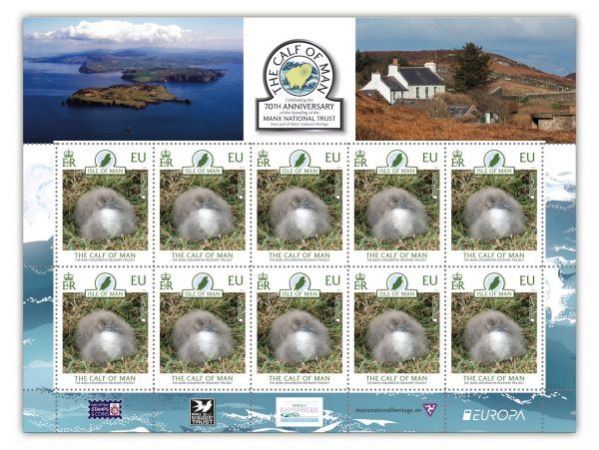 The Calf of Man Europa Sheetlet

This special sheetlet features 10 of the Europa 2021 stamps which spotlight the Manx Shearwater Recovery Project run by Manx National Heritage. 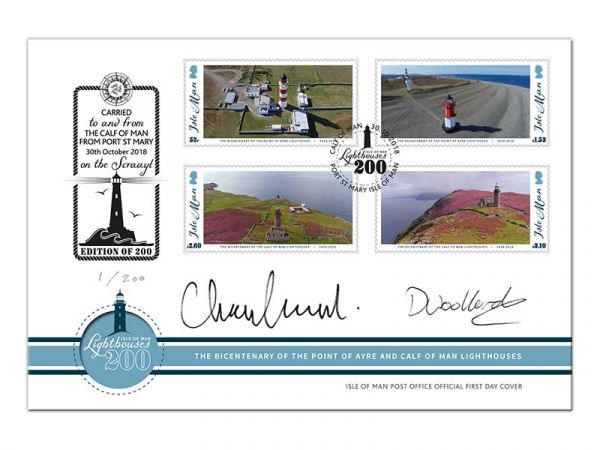 This very special limited edition cover was carried to and from the Calf of Man from Port St Mary on 30th October 2018.

This item is currently out of stock. 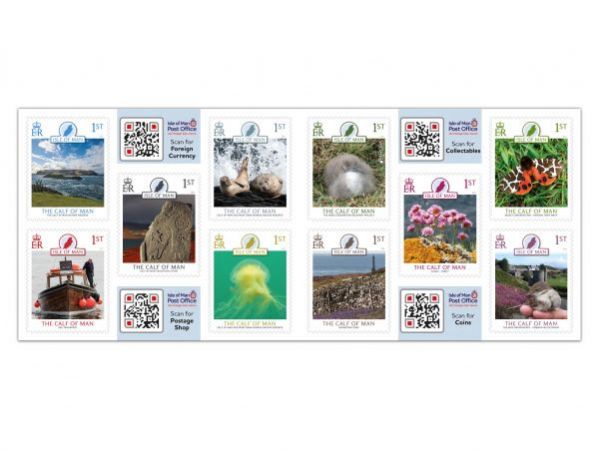 The Calf of Man Self Adhesive Pane

Ten self-adhesive stamps from our Calf of Man collection, each stamp valid for the delivery of letter mail to the UK and within the Isle of Man. 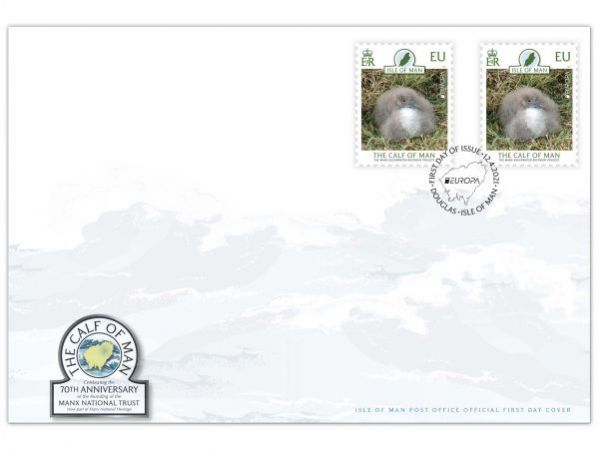 The two stamps presented on the front of this deluxe envelope form our Europa 2021 entry for which this year's theme is 'Endangered National Species'.