Isle of Man Post Office takes great pleasure in presenting a small selection of talented local artists who represent the membership of this hard-working and diverse group - 'The Creative Network'. Our collection of ten stamps mark the tenth anniversary of the collective.

Watch as some of the artists (Myra Gilbert, Debra Tracey-Carney, Graham Hall & Maureen Kennaugh), shares what it means to be a member of the group and to have their beautiful craft showcased on stamps.

The Network is a not-for-profit organisation, run voluntarily by artists for artists, with the aim of supporting creative individuals and promoting appreciation and involvement in the visual arts amongst today’s Manx community and beyond. The Creative Network provides opportunities for artists to socialise, collaborate and share ideas, to jointly exhibit and to generally enrich Manx culture for everyone and to improve public access to a wide variety of visual art on the Isle of Man.

The ten stamps featured in the collection display variety and diversity and represent the progress made through voluntary collective effort over the past ten years.

“At the Creative Network (IOM) we are truly delighted to be celebrating our tenth year since we formed an artists’ network. The icing on our birthday cake has been the generous opportunity to work with the IOM Post Office on this stamp issue to showcase the range of our member artists’ work to the wider world". The Creative Network.

This selection of stamps showcase a wide cross-section of creative endeavours and styles: ceramics, glass-making, embroidery, wood-turning, digital illustration, photography, dress-making, drawing and painting for the first time in a single set.

The EIIR cipher is intended to stand out in metallic gold ink at the top of each stamp.

The explanations of the individual works are quoted mainly from the artists themselves, in their own words:

“Although the techniques used in the making of this picture are fairly traditional the view is a ‘constructed’ one arrived at after several trips out around the ‘Sugarloaf’ as it’s called taking photographs and making small drawings. These were worked up in paintings (this is the third and most ambitious) which tried to reflect the massiveness of the rock, the sound of the numerous noisy birds and the experience of being there on the water looking up at the pinnacle.

The painting is less about a photographic image and more about the memory and experience hence the looser brushwork and liberties taken with perspective.”

“I make objects from local timbers, each is unique and highlights the joys of the colour and texture of the wood.

The items are keepsake boxes made from burrs with the natural edge retained whilst finely finishing the wood to display the intricate patterns. The lids or stoppers are ebonised oak and are in stark contrast and deliberately offsetting to the complex colours and textures of the boxes.”

“My background and practice is in the three dimensional discipline of fashion design, and I have always been drawn to the textures and patterns in the natural world around me. This hand-sewn gampi silk tissue dress covered with pressed wild Manx flowers illustrates the beauty of the natural hedgerows here on the Isle of Man.

It also represents the childhood clothes made by my mother for me and my three sisters. I chose to use tissue paper as a medium because of its ephemeral tactile quality and its frequent association with the packaging of delicate or precious items of clothing.

My aim was to express fragility and transparency of those memories associated with my distant past self through ghostly or husk-like hand-sewn garments.”

“I love to use old paper as it gives really beautiful muted tones when painted on, also re purposing old things is a great challenge. When painting the birds on the music sheets l love to sit them on the notes interacting with each other, the media l use is acrylic.”

“Having seen my interest in gateways, a friend told me of a pair of gateposts to a farm on the coast road from Peel to Kirk Michael.

At first I wasn’t interested as the two posts had lost much of their definition through years of white wash painted over them. I drew them several times, getting attached to their almost sculptural appearance.  They were not in good repair, but recently driving past, I was sad to see them gone, demolished, and no sign of them or their gates anymore.”

Erica Kermode is a ceramic artist, who is inspired by wildlife and the natural world. She creates animal and bird sculptures in stoneware clay, based at her studio in the wilds of the Isle of Man.

This Black Rhinoceros (Diceros bicornis), is one of a series of pieces of work showing critically endangered species.

“The artwork and the title were inspired by a letter my mother wrote to me, which I found after her passing. The image illustrates the saying: ‘You mean the world to me’

I started to explore digital art several years ago with the intention of creating a wider range of illustrations for music and films. The process allows me to play with multiple layers of colours, designs and textures in order to achieve the desired effect. Behind every images lies a story.”

“The plant is Sea Kale which I photographed on Castletown shoreline heading towards Derbyhaven, sketched and then interpreted through free machine embroidery with some hand stitching on a felt background which I also made.  I think of my work as painting with needle, stitch and thread rather than paint.”

Debra is a member of the Contemporary Glass Society. Creating kiln formed glass, she is constantly captivated at how transformative and versatile glass as a medium is. This piece was created entirely from powdered glass and spent approximately 50 hours in the kiln, over 3 firings.

This image reflects Eric’s painterly approach to his surroundings in Peel.

He explores the colours and textures of the three dimensional architectural forms to express his fascination with forms as we perceive them within local spaces.

Moving from abstract painting to photography has enabled him to reflect this aspect of the rugged, jumbled charms of Peel. 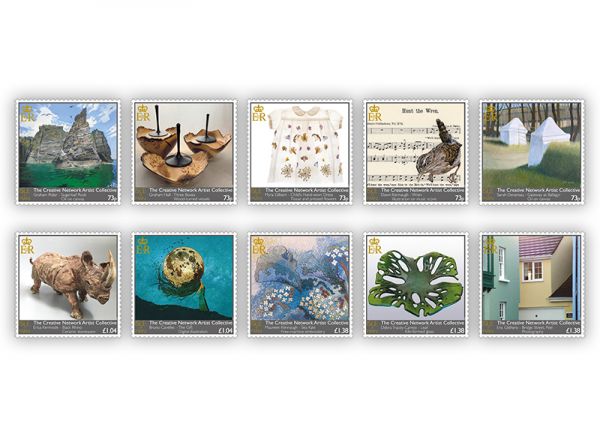 We are delighted to present this set of ten stamps commemorating the 10th anniversary of the Creative Network, a not-for-profit organisation, run voluntarily by artists for artists, with the aim of supporting creative individuals and promoting appreciation and involvement in the visual arts amongst today’s Manx community and beyond. 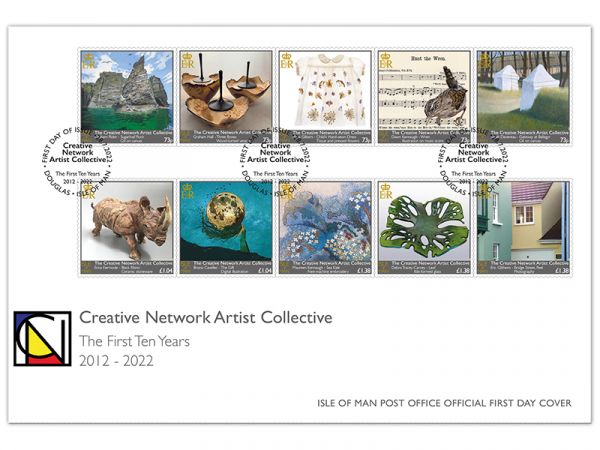 This creative and bold cover features the set of ten stamps, assembled from ten different artworks to celebrate Manx art and mark the tenth anniversary of The Creative Network. 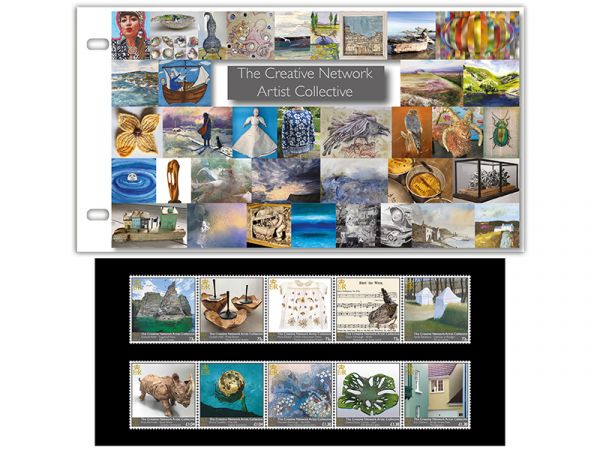 This presentation pack beautifully encapsulates the set of ten stamps in a quality, glossy folder. Inside, the stamps are presented on a black mount to beautifully display your own little pieces of artwork.