Featuring the cypher of King Charles III Lord of Mann

Isle of Man Post Office is proud to issue this set of four stamps showcasing our famous ‘three legs’ triskelion, one of the oldest continually-used national symbols in the world.

For upwards of a thousand years, and probably more, they have been the symbol of Manxness and are still to be seen everywhere on the Island, from historical buildings, coins and banknotes to everyday commercial company branding, everyone identifies with the familiar ‘three legs of Man’.

This is the first Isle of Man stamp issue to feature the cypher of King Charles III. Lord of Mann.

The triskelion (also triskeles or triskel) is an ancient symbol seen in Ireland, for example, carved in stone and believed to date back to Neolithic times. Derived from an ancient sun symbol, the Celtic triskel had various meanings for the early Pagans: it was linked to triadic gods and the three domains of land, sea and sky and was also believed to represent the cycles of life, as well as the Triple Goddess - the maiden, mother and wise woman. It should not be surprising, therefore, to note that the Manx Parliament consists of three divisions – the House of Keys, Legislative Council and Tynwald. Nor the fact that the ancient open-air Tynwald ceremony at St John’s used to occur to greet the rising sun on Midsummer’s Day. The three-legged symbol, which indicated rotary movement, was regarded as representing the three-spoked wheel of the sun god’s chariot as it crossed the sky.

The four graphic artworks on our stamps are derived from: the three legs as they appear in Douglas Town Hall; the triskelion design used to celebrate the Millennium of Tynwald (the 1000th anniversary of our national parliament in 1979); a three legs stone carving observed on a building in Castletown and a modern design interpretation of the three legs of Man.

We are very grateful to Emma Cooke for her enthusiasm for the subject and her generous donation of images for the issue. 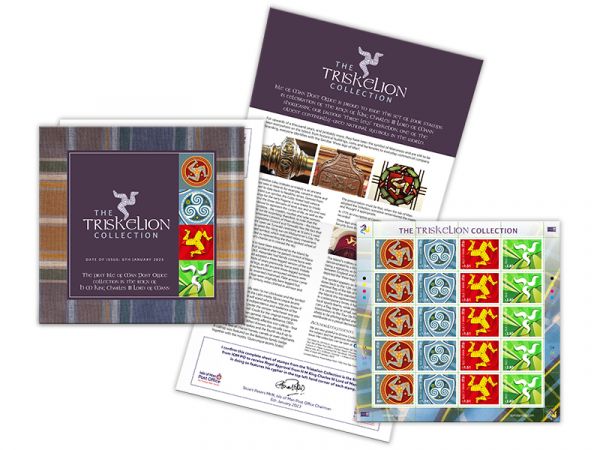 A perfect memento of the Isle of Man's FIRST EVER issue featuring the cypher of King Charles III, Lord of Mann. All beautifully wrapped in a card with information about the Island's oldest national triskelion symbol and a certificate of authenticity. 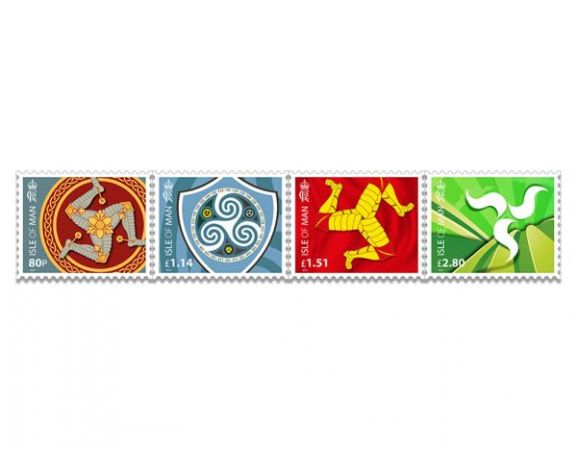 This set beautifully showcases the Island's 'three legs' triskelion on of the oldest continually-used national symbols in the world. The stamps are particularly fitting as the first Isle of Man issue to feature the cypher of King Charles III, Lord of Mann. 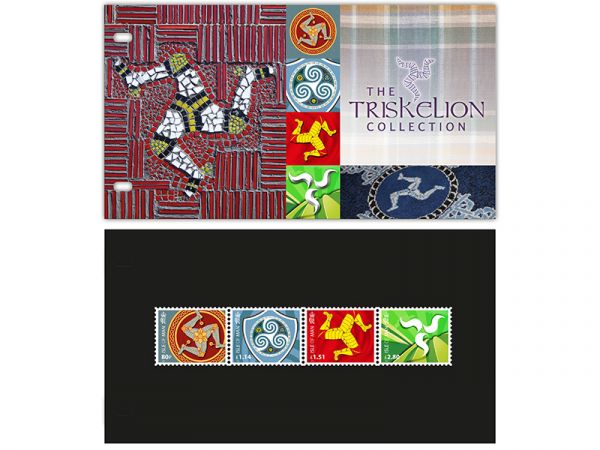 All four Triskelion stamps, featuring the cypher of King Charles III are beautifully displayed and protected on a black mount within this four page glossy folder. 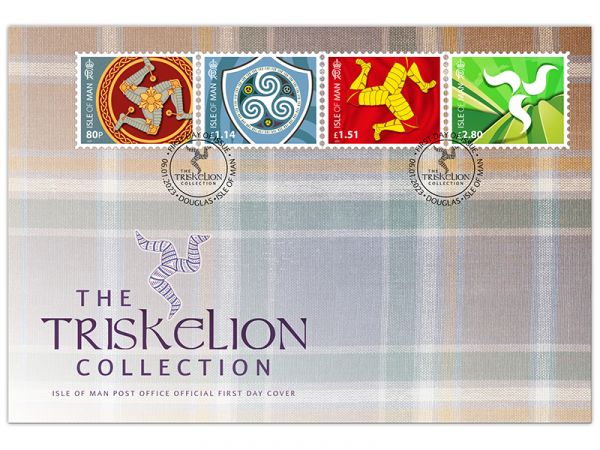 All four stamps from the 'Triskelion Collection' are beautifully displayed on the cover of this deluxe envelope and cancelled with a unique first day of issue postmark, our first for 2023.