A set of four stamps to celebrate the Chinese Year of the Pig.

Isle of Man Post Office is pleased to present this set of four stamps to celebrate the Chinese Year of the Pig with the paintings of Zhang Yong.

Zodiac signs play an integral part in Chinese culture, and can be used to determine your fortune for the year, marriage compatibility, career fit, best times to have a baby, and so much more. The zodiac cycle repeats every 12 years, making it easy to figure out whether it's your year, just check if your age is a multiple of 12.

The Pig is the twelfth of the 12 zodiac animals. According to one myth, the Jade Emperor said the order would be decided by the order in which they arrived to his party. The Pig was late because he overslept. Another story says that a wolf destroyed his house. He had to rebuild his home before he could set off. When he arrived, he was the last one and could only take twelfth place.

Paired with the Chinese Celestial Stems there is a 60-year calendrical cycle. The years also cycle through the five elements of nature: wood, fire, earth, metal and water. The year 2019 brings together earth and Pig.

The Tradition of Chinese New Year
Chinese New Year is a festival (usually referred to as the Spring Festival in modern China) that celebrates the beginning of a new year on the traditional Chinese calendar and runs between the 5th and the 19th February 2019. Festivities traditionally take place from the evening preceding the first day of the year to the Lantern Festival, held on the 15th day of the year. The first day of Chinese New Year begins on the new moon that appears between 21st January and 20th February.

It is one of the world's most prominent and celebrated festivals, and is the cause of the largest annual mass human migration in the world. It is a major holiday in Greater China and has strongly influenced the lunar new year celebrations of China's neighbouring cultures, including the Korean New Year, the Tết of Vietnam, and the Losar of Tibet and is celebrated worldwide in countries with significant overseas Chinese populations, including Singapore, Indonesia, Malaysia, Thailand, Cambodia, the Philippines and Mauritius,
as well as many countries in North America and Europe.

The Artist Zhang Yong
Zhang Yong's 'courtesy name' is Shangren. Since childhood, Shangren was tutored in Chinese painting under Mr Luo Jintang, an artist of the Lingnan school of painting and a cultural relics expert in Guangdong Province. Later, he was taught by Mr Ye Quan, a famous Lingnan painter. Shangren is currently a member of the Guangdong Youth Artists Association, a member of the Guangdong Collectors Association and is the distinguished artist of the Studio of Political Consultative Conference of Guangzhou Haizhu District.

Acknowledgements
We are very pleased to work with The Naughton Group, a Hong Kong-based graphic design and marketing company set up by Dominic Naughton in 1995 with whom we collaborated on our Year of the Snake stamp issue in 2001. Over the years the company has had offices in Shanghai, Singapore and Malaysia. The company provides a wide range of design services to a broad range of clients all over Asia. 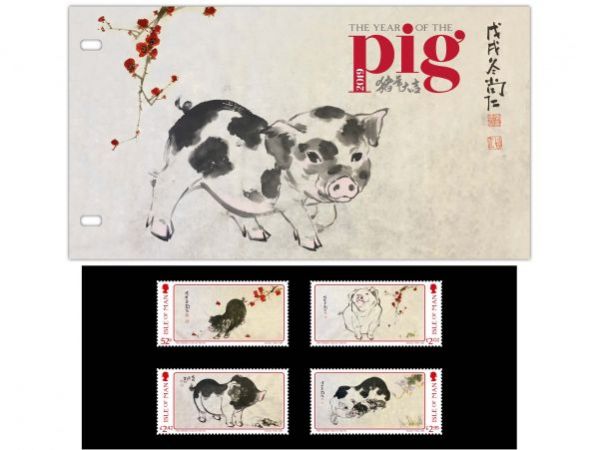 The Year of the Pig Presentation Pack 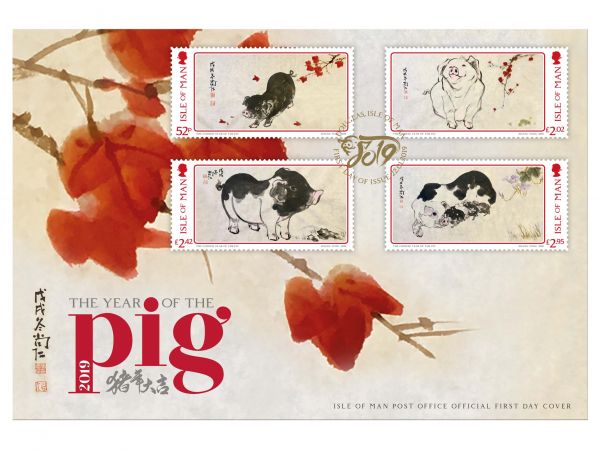 The Year of the Pig First Day Cover

Featuring a unique cancellation mark inspired by chinese culture, this wonderful first day cover features the full set of 'The Year of the Pig' stamps cancelled with the first day of issue, presented on a delightful backdrop. 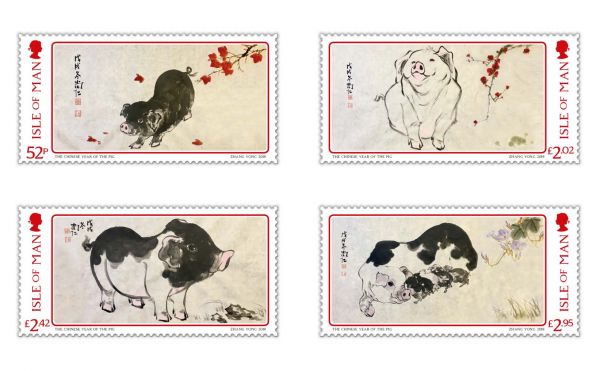 Isle of Man Post Office is pleased to present this wonderful set of four stamps to celebrate the Chinese Year of the Pig with the paintings of Zhang Yong.