Isle of Man Post Office is pleased to present this commemorative stamp in a limited edition of 2017 numbered sheets to mark the 600th anniversary of the first recorded Tynwald ceremony. This colourful celebration collection of Tynwald images centres around the two £1 stamps reprinted from the Happy Birthday Lord of Mann miniature sheet stamp issue of 2006 which showcases Her Majesty Queen Elizabeth II's royal visits to the Island in 1972 and 2003.

Six hundred years ago, Sir John Stanley II, Lord of Man, ordered that the laws of the Isle of Man be written down for the first time. First among them was the procedure for Tynwald Day, much of which is followed to this day. Known as the 'Constitution of Old Time', this customary law describes a practice originally established by the Vikings. The name of Tynwald comes from the Old Norse Thingvöllr, meaning meeting place or assembly field, the place where the Vikings met to uphold the law, settle disputes, and make decisions affecting the community. Over the centuries Tynwald has met at various locations around the Island; today, it continues to meet in the open air once a year, on old midsummer's day, at Tynwald Hill in St John's.

The ceremony unfolds in the same way each year. After a religious service in the Royal Chapel, the Lieutenant
Governor and Members of Tynwald, along with other officials, proceed towards Tynwald Hill, where they sit in a tiered formation. After the Court has been fenced or called into order by the Coroner of Glenfaba, the Deemsters promulgate all the new laws that have been passed during the previous year, reading out loud their titles and a short description in English and Manx Gaelic. The people of the Isle of Man are then invited to present Petitions for Redress, which are collected at the foot of the Hill by the Clerk of Tynwald. After the proceedings on the Hill, Tynwald meets in the Chapel for the Captioning of the Acts, when the President of Tynwald and the Speaker of the House of Keys sign certificates of promulgation for the Acts read out by the Deemsters. After Tynwald has conducted any other parliamentary business, the ceremony is over for another year.

Tynwald Day is marked with pomp and ceremony, but it is also an important aspect of Manx parliamentary democracy. The laws are promulgated so that they can be heard by the people of the Isle of Man; if they are not promulgated within eighteen months of having been passed by Tynwald, they cease to have effect. The people are able to air their grievances directly at the foot of the Hill, and matters can indeed be redressed as a result of this simple procedure. Tynwald Day vividly encapsulates the purpose of the Manx parliament: to serve the people of the Isle of Man.

Tynwald is known as the oldest continuous parliament in the world, and its continued existence is fundamental to the unique identity of the Isle of Man. Tynwald Day is an occasion on which to celebrate that uniqueness. 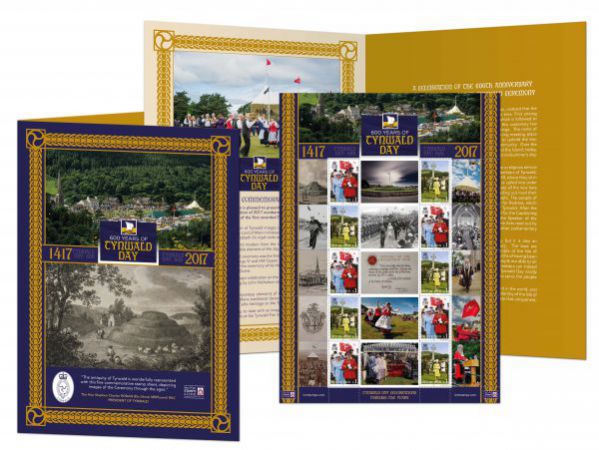 This year marks 600 years since the Tynwald ceremony, held in St Johns, was first described in the Customary Law of 1417, the Island's earliest written statute. To celebrate this momentous occasion we have produced a limited edition commemorative sheet and folder. 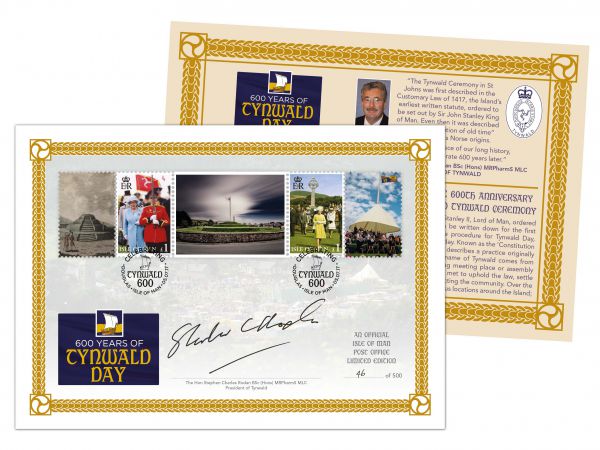 This year marks 600 years since the the Tynwald ceremony, held in St Johns, was first described in the Customary Law of 1417, the Island's earliest written statute. To celebrate this momentous occasion we have produced a limited edition special envelope signed by Tynwald President Steve Rodan.
This is a limited edition of 500.