A celebration of the life of 'Our Greatest Briton', Sir Winston Churchill.

To commemorate the 50th anniversary of the death of Sir Winston Churchill, Isle of Man Post Office has produced a set of eight evocative stamps celebrating the life of the man once voted 'Greatest Briton'.

The Isle of Man Post Office is proud to commemorate the 50th anniversary of the death of one of British history's greatest figures. This year also marks the 70th anniversary of his final year as Prime Minister and we are very pleased to have collaborated with the Churchill Archives Centre and Chartwell on this landmark set of eight stamps. We showcase the range of Churchill's life activities from statesman and orator to leisure painter and bricklayer.

The stamps are available in mint condition and Cancelled to Order, mounted on a specially-designed First Day Cover, accompanied by an illustrated information card, and accompanied by a four-page mini brochure revealing more of the Churchill story and featuring additional photographs.

The issue bears the official Churchill 2015 logo of the Churchill Alliance, which is spearheading commemorations of the 50th anniversary of his death, and text written by Allen Packwood, Director of the Churchill Archives Centre in Cambridge.

Churchill was born into an aristocratic family in 1874 and served with the British military before being first elected a Member of Parliament in 1900. He is best remembered for his leadership during World War II, after becoming Prime Minister in 1940, and his rousing speeches which galvanised British morale in the face of German aggression. Despite losing the 1945 general election, Churchill remained in politics until 1964, a year before his death at the age of 90.

He was also a published author, writing extensively on history and military campaigns, and a dedicated painter whose works are still collected and acclaimed today.

The Isle of Man paid tribute to Churchill in July 1957 when he was given the Freedom of the Borough of Douglas. 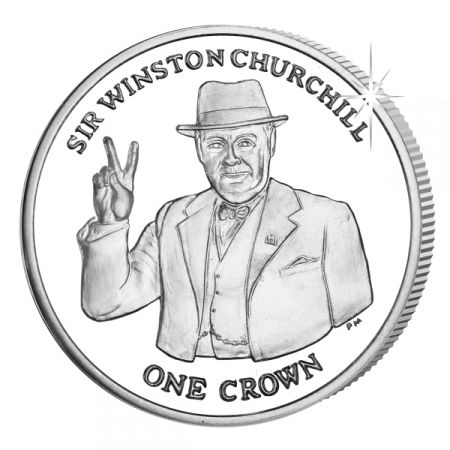 Struck by Pobjoy Mint on behalf of the Isle of Man Treasury, this crown commemorates the 50th anniversary of the death of Sir Winston Churchill. It is available in cupro-nickel with free worldwide delivery.