Chinese Year Of The Ox

Celebrating one of the most widely celebrated annual festivals on the planet.

We are proud to introduce the first set of triangular stamps issued by Isle of Man Post Office in celebration of one of the most widely celebrated annual festivals in the world.  Designed by Manx artist Jay Cover, this historic issue is a reminder of the power of stamps to serve as tribute to both historical events and the history of philately.

In addition to our main character, two other animals feature in the set that are strongly associated with the Ox: the Rooster is the most compatible sign with the Ox while, most famously, the Rat was carried by the Ox to the finish line of the mythological Emperor’s race of the zodiac signs race - only to hop off at the last moment and become the first sign in Chinese cosmology.

When designing the issue, our Manx designer Jay Cover gave careful consideration to the colour scheme, and the result is a  prominent use of red which has positive and auspicious symbolic resonance in Chinese mythology along with the use of gold metallic ink as usual for Chinese celebration.

The stamps are,the first triangular stamps to be issued  by any of the British postal administrations, with the shape used to beautifully emphasise the features of the Ox.

62p – The Ox is most compatible with the Rooster in Chinese cosmology.

£1:58 – In the legendary race to the Emperor’s party the Rat rode on the back of the Ox.

£2:44 – The Ox pictured in calm repose, characteristically strong and tranquil.

£3:22 – Pictured face on in auspicious red, bright and positive.

Manxman, illustrator and artist Jay Cover lives and works in Hastings, England. After studying Foundation Art and Design in 2000 at The Isle of Man College under Ian Coulson, Jay moved to Yorkshire to study BA Visual Communication at Leeds College Of Art. In 2011 Jay moved to London where, alongside his illustration practice, he took a job as an associate lecturer at Camberwell College of Arts, where he worked for five years.

Jay continues to work for a global client base on a large variety of projects, notably producing animated adverts for Facebook and Cheerios, beer labels for Camden Town Brewery, books for Princeton Architectural Press and Tate Publishing and promotional campaigns for The Southbank Centre and The Green Man Festival.

“For the illustrator creating a stamp design for your country is like being an athlete competing in the Olympic Games. Not only that but to do so in such an innovative way, by creating Britain’s first triangular stamp and to celebrate the Chinese New Year speaks to our Island’s global outlook, our openness our desire to embrace other cultures. It’s an absolute privilege as always to work with Isle of Man Post Office and I’m eternally grateful to them for giving me the opportunity.” Artist Jay Cover. 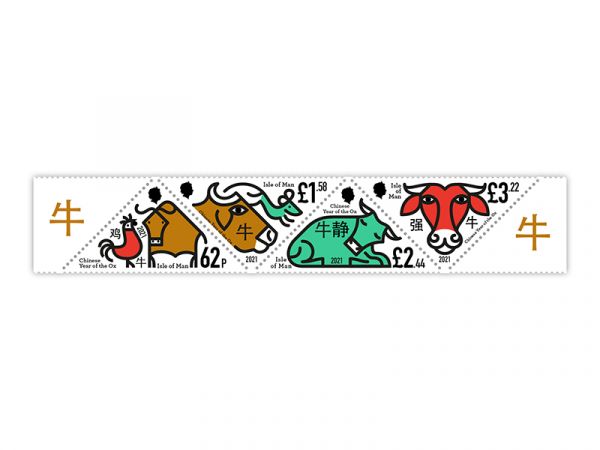 Chinese Year Of The Ox Set and Sheet Set

This wonderful four stamp collection continues our Lunar New Year issue programme and forms the first triangular stamps to be issued by any of the British postal administrations. 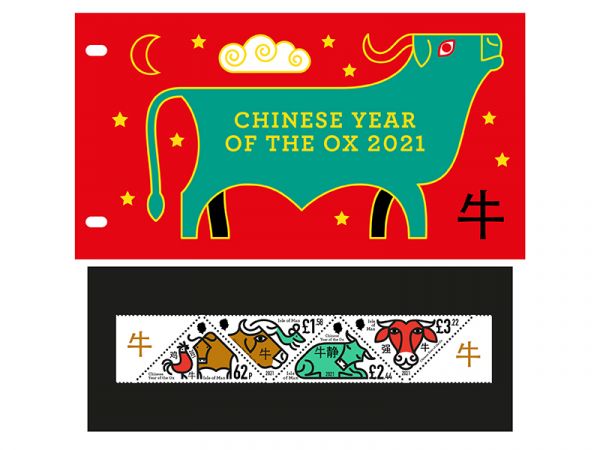 An image of the Ox, designed by illustrator Jay Cover takes centre stage on the cover of this beautiful four page glossy folder. Inside you will unveil a mint set of the four triangular shaped stamps, presented on a classic black mount. 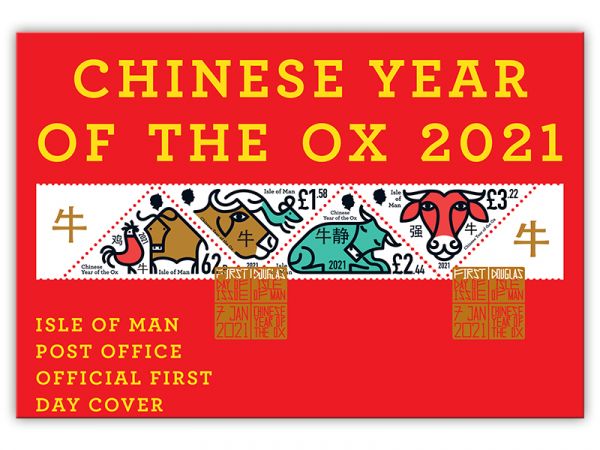 The four stamps gracing the cover of this vibrant, deluxe envelope represent the first ever triangular stamp issued by the Isle of Man Post Office. 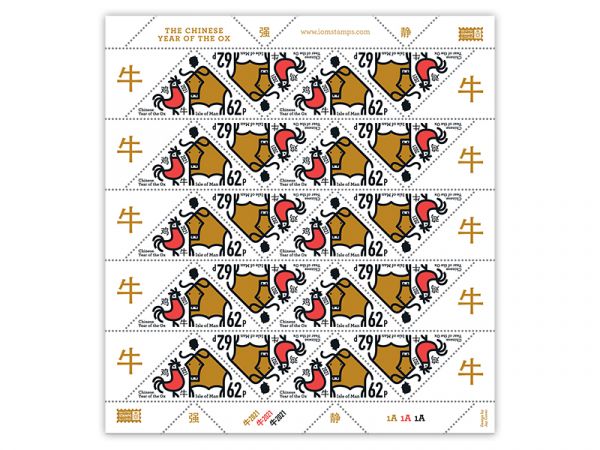 A special sheet of twenty, first class value triangular shaped stamps in celebration of the Chinese Year of the Ox.