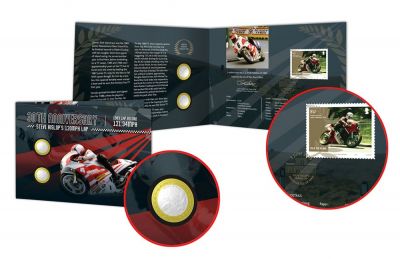 One of the greatest TT achievements of all time is being celebrated in an impressive new set of coins (Issue date: 31st May 2019).

Thirty years after he broke the 120mph barrier around the world-famous course, Steve Hislop's record-breaking Formula One triumph is remembered.

A landmark anniversary stamp and coin collectors' pack is now on sale comprising two x £2.00 coins and a stamp commemorating 'Hizzy's' blistering lap record from 1989 – the first of three TT victories the popular Scotsman enjoyed during that year's event. This collectible coin and stamp set will be limited to just 1,000, all numbered.

The issue features photographs from the archives of "FoTTofinders" with the story of Hislop's early TT years written by Bill Snelling.

It also recalls personal tales from Hislop's F1 victory including the lap he found his front brake was defective and had to take a corner into Kirk Michael on the pavement!

The stamp also featured in a four-stamp collection, TT Winners, which was issued by the Isle of Man Post Office in 2017.

Maxine Cannon, General Manager, Isle of Man Stamps & Coins, said: 'Coin and stamp collections like this always prove a big hit with fans so it's fitting to mark the milestone of such a special landmark in TT history.
'This set is a tribute not only to the achievements of a really popular rider – known to commentators as "The Flying Haggis" - but also to the remarkable history of the event, celebrating the astonishing talents and racing feats of a true TT hero whose legacy lives on.'
Steve Hislop's 120mph Lap can be ordered from www.iompost.com/hislop.