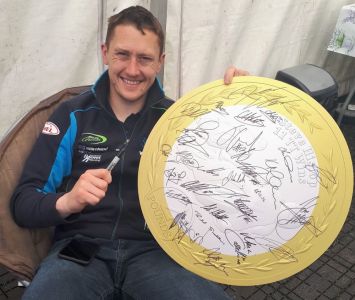 In conjunction with this year's Isle of Man Classic TT we celebrate the life and career of Steve Hislop, one of the greatest British motorcycle racers of all time. Entitled 'Back to the Future: The Hizzy Years' this celebration took place 30 years after Steve set the first ever 120mph lap around the legendary TT Mountain Course, a speed that remains a benchmark three decades on.

A set of two signed presentation boards by TT riders and VIP's will be up for auction. Each of the two coins measures 50cm diameter and have been hand-signed during either the 2019 TT or 2019 Festival of Motorcycling. A list of signatures can be found below. The coins will come complete with a disc of images of the TT riders and VIP's holding the coin they have autographed. Proceeds of the auction will be donated to the TT Riders Association.

To find out more about the coin collection, please visit www.iompost.com/hislop.