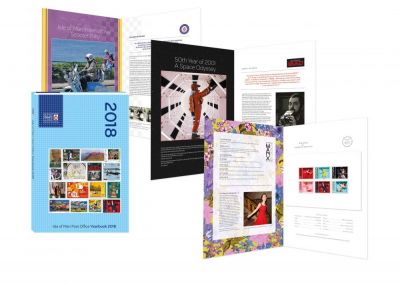 The 72-page hardback book is also packed with additional imagery and fascinating text that includes contributions from key individuals involved in the design and creation of every issue.

Limited to just 550 copies, this beautiful collectable contains a diverse range of themes from royalty, motorsport, wildlife to Manx history and culture. It contains 16 illuminating chapters which range from the commemorative to the celebratory, and captures milestone events in 2018 that are key to the Isle of Man.

Among the collections included:

• IOMPO commemorates the 100th Anniversary of the RAF in a collection of eight stamps depicting images of famous aircrafts.
• The most iconic dress creations of Manx Designers Justin Thornton and Thea Bregazzi, that have been worn by royalty and stars of stage and screen are featured on a set of six Isle of Man stamps.
• A set of six stamps to celebrate the royal engagement of HRH Prince Henry of Wales and Ms. Meghan Markle.
• In celebration of the Year of Our Island 2018, the Isle of Man Post Office commissioned a set of ten stamps featuring key activities, pastimes, culture, landscape and heritage on the Island.
• Celebrating the 50th anniversary of Stanley Kubrick's 2001: A Space Odyssey, The Isle of Man Post Office launched of a series of eight hi-tech stamps that celebrate half a century since the making of this legendary British film, rated one of the greatest films of all time.
• Beano and the Isle of Man Post Office celebrate 80 years of the world's longest running and most loved comic with a special collection of stamps, featuring Beano's much-loved characters Dennis & Gnasher on the Isle of Man.

Isle of Man Stamps & Coins General Manager, Maxine Cannon said, "This has been a very special year for the Isle of Man Post Office as we celebrated our 45th anniversary since postal independence. We have been honoured to work with an eclectic mix of researchers, designers and suppliers, enabling us to pay tribute to memorable and monumental events throughout the year but also to celebrate our Island, our heritage and our culture. This beautiful and highly collectable limited edition 2018 Yearbook not only cherishes those moments in history, it is also the perfect present for stamp collectors and Isle of Man enthusiasts."
In addition to the Yearbook there is also a 2018 Year Set available that contains every set of mint condition stamps issued in 2018 inside a specially designed folder. Furthermore, we offer a 2018 Year Collection of Presentation Packs that includes a complimentary and sturdy Isle of Man Post Office ring binder. For more information on all three products visit www.iompost.com/yearcollections2018