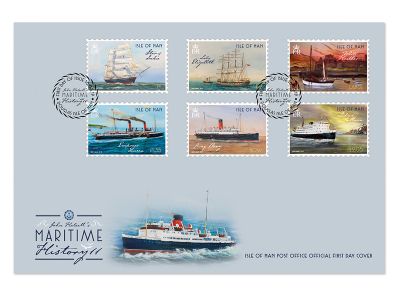 Surrounded by the Irish Sea the Isle of Man is proud of its maritime history Manx vessels of all sizes have played an enormous role in its history, and are fondly and proudly remembered by its people. Many thousands of Manxmen (and women) have made their living from the sea, in various capacities, as boatbuilders, fishermen, merchant sailors, or stewardesses.

This beautiful stamp collection is based on paintings of Manx born John Halstsall who was born during World War II in Douglas but raised in Laxey. The sea and ships captivated him from his earliest days and all his life John worked on the high seas. First and last with the Isle of Man Steam Packet but with nearly 30 years in between as local fisherman and 'deep sea' merchant seaman. John continued to paint his favourite

subjects in oil and watercolour right up to his death in 2017: Manx vessels of every variety, harbour views, and, occasionally, the Laxey Wheel. John worked with integrity, conviction and humility and brought his love of the wide open seas indoors, captured in paint.

The following ships are beautifully illustrated by John Halsall on this set of six stamps.

The Star of India (1863) was constructed as the Euterpe, by the Ramsey ship yard . She is the oldest iron-hulled merchant ship still floating.

The Lady Elizabeth (1879) was not Manx built but was commanded by George Christian Karran of the Karran Fleet, sailing out of Castletown.

The Nobby White Heather (1904) was built by Neakle & Watterson of Peel, and was registered as a fishing boat with port code PL5.

Empress Queen (1897) was the most powerful paddle steamer ever constructed, and during the First World War she became a troopship. She was lost when she ran aground on the Isle of Wight.

SS King Orry (1913) was built by Cammell-Laird at Birkenhead. She became an armed boarding vessel in the North Sea, searching for contraband and enforcing the blockade against Germany until returning to passenger duties between the wars. She was lost to enemy action whilst taking part in the Dunkirk evacuation of 1940.

Lady of Mann was constructed by Ailsa Shipbuilding at Troon. After decommissioning in 2005 the Lady of Mann ended her days as a passenger ferry in the Aegean, before being broken up in Turkey in 2011.

Matthew Richardson, Manx National Heritage Curator of Social History, who wrote the issue text for our collection, said: "I am delighted and honoured once again to be asked to contribute to a stamp issue featuring the work of the late John Halsall. His work does so much to capture the rich maritime heritage of the Isle of Man, and brings to life the many significant vessels which have sailed from its harbours."

Maxine Cannon, General Manager, Isle of Man Stamps and Coins said: "We are honoured to be able to continue our series of maritime history with the impressive and beautiful paintings of John Halsall. We are very grateful to his family for permission to use his work once more for this collection."

Acknowledgements
Our issue would not have been possible without the gracious assistance of the Halsall family who, in memory of John and their mother Sheila, will be making donations to IOM Hospice and the RNLI; charities with which both had close associations that have benefitted from John's work in the past.