New Stamp Collection features six of the most famous shipwrecks in Isle of Man waters. 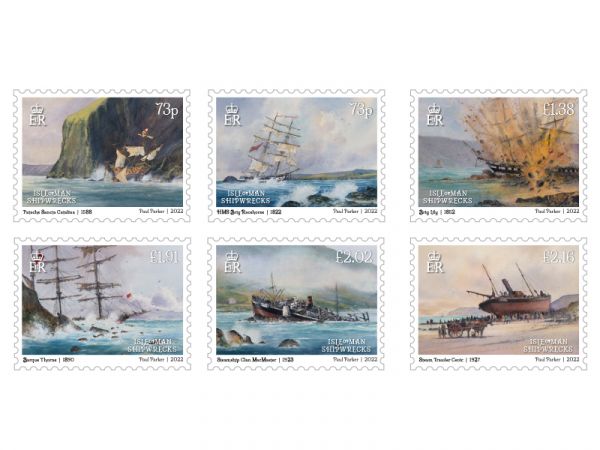 Isle of Man Post Office is delighted to issue a collection pictorially detailing enthralling tales of six of the most significant shipwrecks that occurred off the coast of the Isle of Man over a period of almost five hundred years.

The six-stamp collection vividly illustrates the ships at their ultimate resting place, as well as key details on each ship’s voyage, its crew, and the development of the events that followed and how those events affected the Isle of Man.

Adrian Corkill, a maritime historian who has spent years researching and exploring shipwrecks in the surrounding waters of the Isle of Man, provided the fascinating text for the collection. He writes: “Many hundreds of ships have met their final fate around the coast of the Isle of Man. The Island’s central location in the Irish Sea and proximity to major shipping routes have been factors in centuries of losses.”

While two of the earlier ships (HMS Brig Racehorse and Patache Sancta Catalina) are represented by original illustrations by Manx artist Paul Parker, four of the artworks are archival images provided by Manx National Heritage. Paul and Adrian worked tirelessly together to make sure that the depiction of HMS Brig Racehorse and Patache Sancta Catalina is as meticulously detailed and historically as accurate as possible.

Paul said: “I am honestly honoured and very pleasantly surprised to be asked to produce the artwork for this set of Isle of Man stamps. As a Manxman it really does mean a lot to me.”

The inclusion of The Racehorse pays tribute to a significant local anniversary; the 200th anniversary of its sinking on the 14th of December 1822. Its sinking demise inspired Sir William Hillary, who saw the importance of support for the families of lost rescuers, leading to the establishment of a new national life-saving institution in 1824, the forerunner of the RNLI, which will be celebrating 200 years in 2024.

Isle of Man Stamps and Coins General Manager, Maxine Cannon said: “The six shipwrecks featured have each been selected for their historical importance and fascinating backstories, none of which would have been possible without the fruitful collaboration between many involved, including Adrian Corkill, Paul Parker and Manx National Heritage. It is also extremely fitting that the issue coincides with the 200th anniversary of the sinking of the Brig Racehorse, and I would like to extend thanks to Tony Brown OBE, representative of the Castletown HM Brig of War Racehorse Commemoration Group who will run an exhibition to mark this historic occasion in December”

Issued on the 12th October 2022, the collection is available as a Stamp Set, Sheet Set, Presentation Pack and a First Day Cover. Visit iompost.com/Shipwrecks to find detailed information about each product. All the products are available for purchase with free delivery across the world and can be placed through our website, by postal order, or telephone (+44 1624 698430).

Isle of Man Shipwrecks is amongst the last of our issues to have received royal approval by HM Queen Elizabeth II and in doing so allows for the inclusion of Her Majesty’s Cypher.