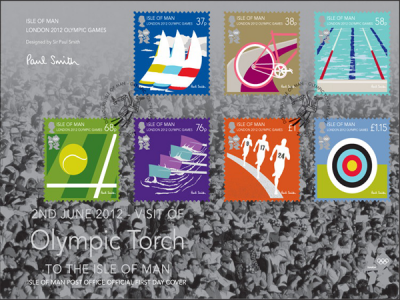 With only one month to go until the Olympic Torch Relay arrives in the Isle of Man on Saturday 2nd June 2012, Isle of Man Stamps & Coins is preparing a very special cover with an Olympic Torch postmark to celebrate the visit.

The Olympic Torch tour arrives on Saturday morning and will visit a variety of locations around Douglas, Laxey and the south of the Island, culminating with a colourful afternoon of celebration in Castletown Square – set to be a real family day out, not to be missed.

Isle of Man Stamps and Coins was hugely honoured and thrilled that Sir Paul Smith agreed to design their London 2012 collection of stamps and is certain they will help to ensure the memory of the Games remains in the mind long after the last medal has been awarded.

With only fewer than 13 weeks to go until the opening ceremony of the London 2012 Olympic Games, it will be the third time that London has hosted the Games, with the last one being in 1948.

An event of the magnitude of the Games – the greatest show on Earth – attracts leading figures from different areas of expertise and the Isle of Man Post Office is delighted that Sir Paul Smith has clearly demonstrated his passion for sport in his collaboration on this collection.

A lifelong follower of the World Cycling, Sir Paul Smith was honoured to be asked to design the London 2012 stamp issue by the Isle of Man Post Office. He was also inspired in one of his designs by good friend, Olympic Cyclist and hometown hero to the Isle of Man, Mark Cavendish, MBE. The issue features, amongst other sports, a Cycling Road Bike design on the miniature sheet which will surely encourage current World Cycling Road Race Champion, Mark Cavendish, on to victory.