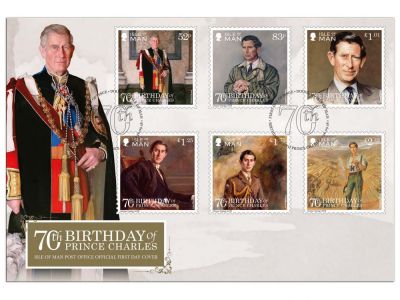 Renowned artists and RSPP members June Mendoza, Richard Stone, David Griffiths and the late Michael Noakes have all had the privilege to paint HRH Prince Charles, current Lord of the Isles, throughout the last 70 years and it is their portraits, which appear on the stamps in this collection.

June Mendoza, whose paintings feature on the £1.25 and £1.75 stamps says: "HRH was always wonderfully cooperative. There is a room in Buckingham Palace in which we painters paint our Royal sitters, so it is only now, seeing the two paintings together for the stamps, that I am amused to see how similar the heads are of my first two portraits of the Prince of Wales, as, of course, although they were done years apart, each was necessarily painted at the Palace in exactly the same room, position and light as the other."

"What a stamp of approval! I am doubly honoured." says Richard Stone and explains further: "The painting featured on the 52p stamp was commissioned by the Gordon Highlanders Regiment. The Garter Robes portrait showing on the £1.01 was commissioned by The Goldsmiths Company."

The final stamp in the collection (£2.25) features a Michael Noakes portrait of HRH Charles Prince of Wales in Nepal, which was unveiled at The Ritz in 1984. Michael Noakes, who sadly died in May aged 84, was one of the Royal family's favourite portrait painters: "Michael was well known to the Royal Family having painted many portraits of them over nearly half a century, and having spent a year illustrating his book 'The Daily life of the Queen'. Sadly he died earlier this year, only shortly after exhibiting his last portrait of Her Majesty the Queen at the RSPP annual exhibition at Mall Galleries." says Annabel Elton of the RSPP.

Isle of Man Stamps and Coins General Manager, Maxine Cannon said, "We are pleased to introduce this special collection to celebrate the birthday of HRH Prince Charles. It was a pleasure to work with the RSPP and these acclaimed artists to compile this impressive collection of stamps to commemorate the heir apparent."

The collection features a set, first day cover and presentation pack and is available to view and order here www.iompost.com/charles