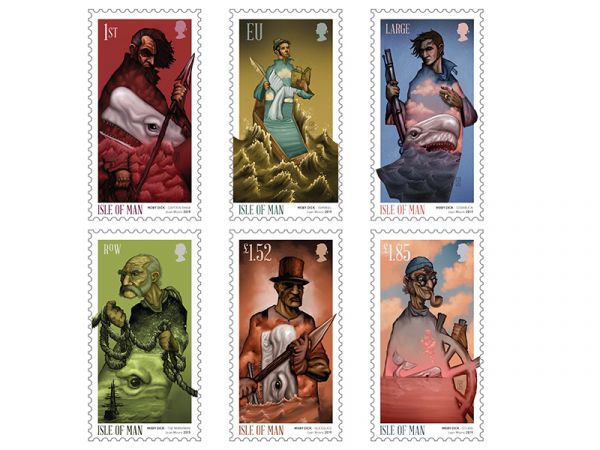 Isle of Man Post Office is proud to mark the 200th anniversary of the birth of American author Herman Melville (1st August), best known for his classic novel Moby-Dick. The stamp collection is set to be issued 22nd July 2019 and was created by Manx born artist Juan Moore. He illustrates each character described by Melville in a stunning manner and perfectly reflects their qualities and characteristics. Emma Cooke, of Isle of Man based EJC Design, has designed the stamps and complementary products while expert commentary on the issue text was written by John Quirk.

If you've not read Moby-Dick, the chances are you will not know of its Isle of Man connection... a character called The Manxman. Published in 1851, Moby-Dick is narrated by the character Ishmael and focuses on the crew of the whaler, Pequod, led by Captain Ahab. Part of the Pequod's crew is the Manxman. He is the oldest crew member and is described as 'sepulchral'. Melville paints him as something of a mystic, a man who has 'studied signs' and who Ishmael says has 'preternatural powers of discernment'. Most sailors are superstitious folk and The Manxman's role is to wax lyrical on the omens, good and bad, facing the crew of the Pequod.

The novel took its time to be considered a classic. It received a decidedly mixed response from critics and was far from being a bestseller. After Melville's death in 1891, several of his novels were reprinted and caught the attention of the New York literary scene - slowly, the acclaim for Moby-Dick grew and by the 1920s US critics and readers had started to embrace it. The novel's reputation was cemented over the next few decades.

Each of the six stamps portrays a prominent character of the Moby-Dick novel, which was originally published as The Whale in the UK. The first class value stamp depicts Captain Ahab and his harpoon along with a vicious looking Moby-Dick. The EU value stamp is dedicated to Moby-Dick narrator Ishmael, who is the only surviving crewmember of the ship Pequod. Chief mate Starbuck, who was the only one among the crew in objecting to Ahab's quest, is portrayed on the Large Letter stamp. The RoW value shows The Manxman from the Isle of Man, the oldest member of the Pequod's crew, he has 'preternatural powers of discernment'. Queequeg, a harpooner to first mate Starbuck and best friend of Ishmael's, is illustrated on the £1.52 value stamp. The final stamp of the series (£1.85) shows Stubb, the second mate of the Pequod, who is described to always have a pipe in his mouth and a smile on his face.

Philip Hoare, author of Leviathan or, The Whale, says: 'Herman Melville's Moby-Dick is one of the most famous and extraordinary books ever written. How amazing to have this wonderful set of stamps from the Isle of Man to remind us that Melville, who was a great connoisseur both of art and of islands, sailed many oceans, and met many people - even Manx people! This is a great way to celebrate the great American author's birth, and his strong links with Great Britain.'

Maxine Cannon, General Manager, Isle of Man Stamps and Coins said: "Being a small Island nation we are very proud of the impact Manx people have had and still have worldwide. Apparently so much so that Herman Melville immortalised us in this classic piece of literature. It's only just that we repay the favour with this beautiful stamp collection."

NOTES TO EDITOR
• Photo embedded and attached of Stamp Set
• Further attachments: Photo Juan Moore & John Quirk, First Day Cover, Presentation Pack
• Text attached: Issue Text with detailed information
• About the artist Juan Moore: Juan was born and raised on the Isle of Man and studied illustration and 3D computer animation at Falmouth College of Arts. He works as an illustrator and fine artist across many areas including publishing, advertising and editorial and his work has appeared regularly in the Guardian newspaper for many years. Recent forays into prop making for TV and producing illustrations for board games have coincided with exhibiting his paintings and digital collages worldwide in addition to the production of limited edition small press books. Juan was a digital colourist on the Oscar-nominated animated film Chico & Rita and he has written and directed two animated shorts, one of which won best animation at the IOM Film Festival. He also lectures illustration and digital art at University College Isle of Man.
• About the Issue Text Author John Quirk: John Quirk is a Manx-born freelance writer, editor and event organiser. A former newspaper journalist and PR director, he has written two books - The Manx Giant: The Amazing Story of Arthur Caley, and The Manx Connection, for which he visited Manx societies around the globe, charting the history of Manx emigrants. John is one of the founders and directors of the annual Manx Litfest, which started in 2012, and one of the team which organises TEDxDouglas. He also works as a freelance coordinator for Rushen Heritage Trust.
• About Philip Hoare - collated from Wikipedia: Philip Hoare (born Patrick Moore, 1958) is an English writer, especially of history and biography. He wrote and presented the BBC Arena film The Hunt for Moby-Dick, and directed three films for BBC's Whale Night. Between 2011 and 2012, his self-professed 'whale obsession' led him to create the Moby Dick Big Read. The project, curated by Hoare and artist Angela Cockayne, involved the construction of an online audiobook of all 135 chapters of Herman Melville's classic Moby Dick; or, the Whale. The readings were delivered by a multitude of celebrities, including Tilda Swinton, Stephen Fry, Sir David Attenborough, John Waters, Simon Callow and David Cameron, and accompanied by images from contemporary artists such as Anish Kapoor, Antony Gormley, George Shaw and Susan Hiller. The readings were uploaded to the Moby Dick Big Read website, with one chapter available for download per day from 16 September 2012. All downloads are free but donations are invited to 'Whale and Dolphin Conservation Society' (WDCS).
• For further pictures please visit our Media Centre where you can freely download copy, latest news, copyright free and approved images http://www.iompost.com/media-centre/login/