Mitch Murray CBE is a long-time resident of the Isle of Man, having moved here in the 1970s. His varied career began in the 1960s and he has written countless international hit songs covered by a sparkling array of acts from The Beatles to Shirley Bassey. During this time, he has also found success in speech writing and radio broadcasting, and in December 2019, Mitch’s contributions to the entertainment industry were recognised by HM The Queen by the award of a CBE.  Through this nostalgia-tinted stamp issue, we celebrate his multi-faceted and distinguished career, concluding with Mitch's life on the Isle of Man. 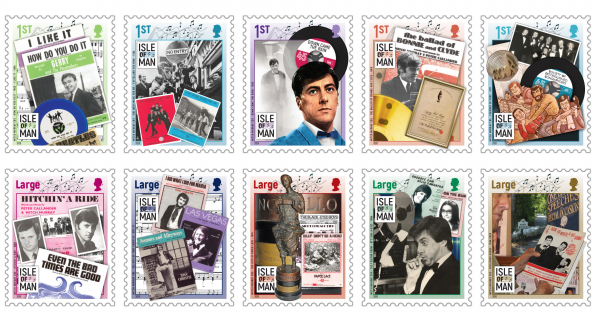 The life and achievements of Isle of Man resident Mitch Murray CBE are celebrated by the Isle of Man Post Office in a set of ten dynamic stamps to be issued 16th September 2020.

Songwriter-Composer, Producer and Author Mitch Murray CBE, whose career spans sixty years, has lived on the Isle of Man since 1978. Throughout his songwriting career his hits topped the charts and were performed by bands like Gerry and the Pacemakers (‘How Do You Do It?’ and ‘I Like It’), Georgie Fame (‘Ballad of Bonnie and Clyde’), Paper Lace (‘Billy Don’t Be A Hero’) and Tony Christie (‘Avenues and Alleyways’, ‘Las Vegas’ and ‘I Did What I Did For Maria’). With Freddie and The Dreamers he had his first American number one hit: ‘I’m Telling You Now’.

Since his rendition of ‘Down Came The Rain’, Mitch has built up a reputation for comedy in many areas, including broadcasting, after-dinner speaking and a series of best-selling books on the subject of humorous speechwriting. In 2019 he was made a Commander Of The British Empire (CBE) for services to music.

In a world first, Mitch Murray’s new composition ‘The Mannin Suite’, an homage to the Isle of Man’s legendary Fairy Bridge, will be released first and exclusively, for a limited period, ‘Zappar-access-only’ via this stamp collection. This is a free added content for the people who own the stamps and will premiere on issue date 16th September 2020.

As a special limited edition, a 28 page prestige booklet about Mitch Murray and his outstanding career features the stamps as well as a bonus four track CD-EP with four special intros recorded by the man himself and will have a certificate of authenticity signed and numbered by Mitch.

Mitch Murray CBE, said “This fabulous collection, issued by the Isle of Man Post Office, represents my career in all its aspects, and covers a period of sixty years. It’s an honour I could never have imagined receiving.”

Chris Raynor of Paper Lace said “The Paper Lace success was due to Mitch Murray & Peter Callander...without Mitch’s commercial & catchy songs the world may never have heard of the band.”

Maxine Cannon, General Manager Isle of Man Stamps & Coins, said: “It is a real privilege for us to work with Mitch Murray and to be able to commemorate his career so far with this dynamic and vibrant stamp collection. His many achievements are an impressive collection of success and we are proud to feature them on this very special stamp collection together with a world first: a new musical composition released via a stamp issue!”

Adrian Bell, Creator & Director @ the Dome said  Make a wish - and it may come true. Thanks to the Fairies, Mitch Murray and Isle of Man Post Office - ours did.  The team @ 'the Dome' were tasked with adding animation for the Zappar App to Mitch's song, but with one 'Hitch' - Don't show the Fairies.  Well, we achieved it and the Fairies are still what everyone imagines them to be.  Using the Zappar App technology to launch a stamp edition is a first Isle of Man Post Office and the team @ 'the Dome' are grateful to be associated with this unique event. Hopefully many people will purchase Mitch's stamps, scan them and listen to the 'Mannin Suite'... Oh and watch too!'.