This wonderful six stamp collection aims to capture the essence and the appearance of the Island at the time of Wordsworth’s visit to the Island in 1833, and is presented through period paintings chosen in relation to the Manx scenes discussed. 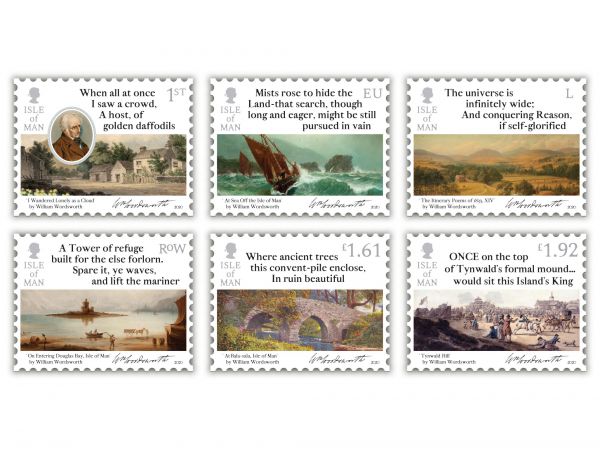 On 7th April 2020 the Isle of Man Post Office celebrates the 250th anniversary of the birth of William Wordsworth, one of Britain’s best-known romantic poets of all time, by releasing a wonderful six stamp collection. These beautiful stamps capture the essence and the appearance of the Island at the time of Wordsworth’s visit to the Island in 1833, and are presented through period paintings chosen in relation to the Manx scenes discussed in Wordsworth’s sonnets that were inspired by the Isle of Man.

Although synonymous with The Lake District, William and Dorothy Wordsworth were strongly associated with the Isle of Man and Manx locations were featured in ‘The Itinerary Poems of 1833’.

William himself only spent four days on the Island during July 1833, as part of his journey to the Scottish islands with his eldest son John and old friend Henry Crabb Robinson. He expressed an interest in ascending Snaefell and visited Ballasalla, describing it as ‘a little wood-embosomed village by the side of a stream upon which stands the ruined walls of an old Abbey’. A water-colour of Rushen Abbey, painted during the 1830s and given by William Wordsworth to Thomas Cookson, has latterly been gifted to Tynwald by his descendants.
Wordsworth also spent time in the Castletown area and King William’s College before heading towards South Barrule. He expressed much delight with Peel Bay and confessed that on the whole he liked the Isle of Man better than he had expected, vowing unsuccessfully, to return with his wife. He produced ten sonnets about the Island, although one was written by Captain Henry Hutchinson, with one in particular being dedicated to Sir William Hillary (founder of the forerunner of the RNLI).

Extracts from some of Wordsworth’s most famous works are featured on each of the six stamps which form the focal point of this collection.
Michael McGregor, Director of the Wordsworth Trust, says: “We are delighted to announce further plans for Reimagining Wordsworth in the lead up to the national 250th anniversary celebrations. Wordsworth the poet was a revolutionary whose work and ideas are still relevant to our lives today. By taking a fresh new look at his work, the project will bring his story up to date, welcome old and new audiences both locally and globally and transform Dove Cottage and the Wordsworth Museum into a dynamic destination for creativity, inspiration and enjoyment.”

Maxine Cannon, General Manager Isle of Man Stamps & Coins, said: ”Working alongside the Wordsworth Trust on this very special Isle of Man themed William Wordsworth stamp collection has been an honour and we are delighted with the finished product. We are also very grateful for the support of our issue text author Valerie Caine who has been a wealth of knowledge and provided us with some very vital research on William Wordsworth and his time on our beautiful Island.”

The ‘William Wordsworth 250’ collection is available as a Set and Sheet Set. Also available is a Presentation Pack and  First Day Cover, which both include special micro-text, which when viewed through a magnifying glass unveils extracts from the featured sonnet. For further information, please visit www.iompost.com/Wordsworth.

·         Acknowledgements :We are very grateful to the following for their kind assistance in the production of this issue: Manx National Heritage,

·         Every effort has been made to trace or contact all copyright holders. The Isle of Man Post Office will be pleased to make good any omissions or rectify any mistakes brought to their attention at the earliest opportunity.