Isle of Man Post Office takes great pleasure in issuing this landmark set of stamps on 11th August 2020, showcasing three remarkable master watchmakers who are inextricably linked to the Isle of Man. 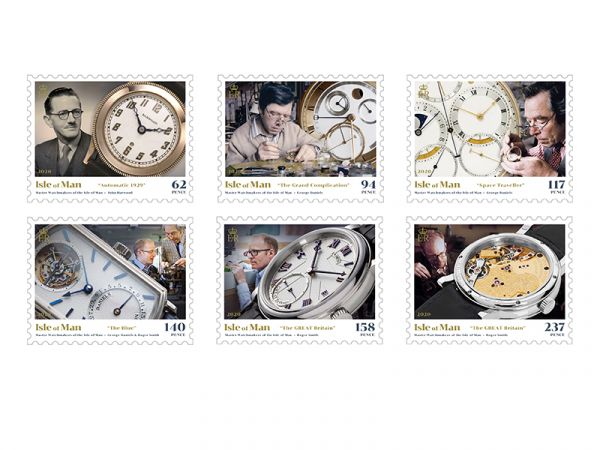 The Isle of Man is a nation regarded by many watchmakers and enthusiasts alike, as the country of origin for some of the finest watches and timepieces in the world. Three extraordinary talented British master watchmakers, John Harwood, George Daniels and Dr. Roger W Smith OBE, who called the Isle of Man their home, and their luxurious timepieces are being displayed on this remarkable set of six stamps.

One of the greatest watchmakers of the modern era, George Daniels (1926-2011), had his breakthrough with the invention of the co-axial escapement, ultimately resulting in increasing the efficiency of the mechanism. It is considered by many to be the most important development in horology in 250 years. Sotheby’s London sold Daniels’s ‘Space Traveller’s Watch I’ in 2019 for the staggering sum of £3,615,000 making it one of the most expensive watches ever sold. The author of ‘Watchmaking’ and several other books is depicted on two of the six stamps and shares a third one of them with Dr. Roger Smith OBE, who wrote the issue text for this collection.

Roger Smith’s horological career began, aged 16, at the Manchester School of Horology. He graduated top of his class and was awarded the British Horological Institute’s Bronze Medal, which is awarded to the most outstanding graduating student of any given year. During the course, Dr. George Daniels, attended as a visiting speaker and inspired Roger’s ambition to hand-make watches. After eventually working alongside Dr. Daniels to create the Millennium Series of watches, Roger established his own studio in the Isle of Man in 2001. Carrying on the legacy of the Daniels Method of watchmaking with his own individual style, over the years Roger Smith has been recognized by receiving numerous awards and honours including the Barrett Silver Medal and was also awarded an OBE in 2018. In 2019, Smith announced a collaboration with Manchester Metropolitan University to develop the world’s first mechanical watch using nano-materials.

Roger W Smith OBE, said “I am delighted to have contributed to this fascinating stamp issue by the Isle of Man Post Office. It reminds us not just about the achievements of John Harwood and George Daniels, but also the Isle of Man as a very special place in the pantheon of horological invention”.

Maxine Cannon, General Manager Isle of Man Stamps & Coins, said: “We are proud to be able to showcase another facet of our Island with this landmark stamp issue. It is incredible to think that some of the horological society’s most highly rated master watchmakers were connected to the Isle of Man in such an inextricable way. Our gratitude goes out to Roger W Smith OBE and Alastair Audsley whose contributions and support were invaluable in the creation of this stamp issue.”

The ‘Master Watchmakers of the Isle of Man’ collection includes a set of six stamps, a Presentation Pack, a First Day Cover, a Sheet Set and a special 28 page Prestige Booklet and can be ordered from www.iompost.com/watchmakers.