'All Aboard Please!' Buses Part Four 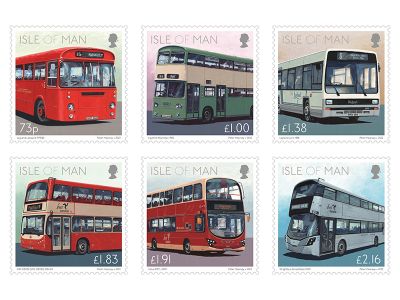 All Aboard Please! Buses Part Four 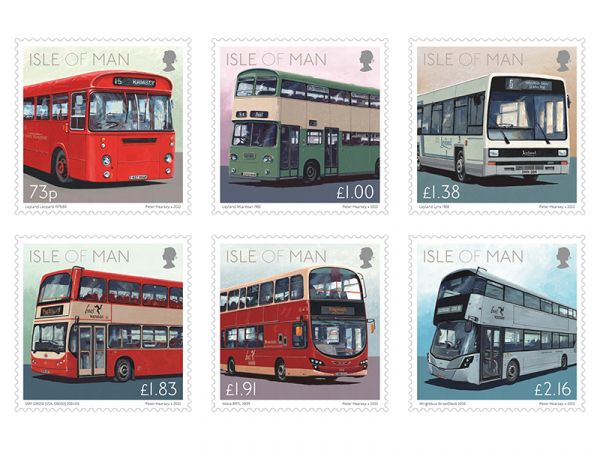 Isle of Man Post Office (IOMPO) will issue a set of six stamps on 5th May 2022, completing its much loved collection ‘All Aboard Please! Buses Part Four’.

The latest instalment of the series features a selection of buses in public service on the Island from the period of nationalisation in 1976 to the present. Like all previous stamp sets (issued 1999, 2015 and 2019) the images have been created by local artist Peter Hearsey. Well-known author and historian Richard Davis compiled the issue text. The collection has been designed by local designer Emma Cooke of EJC Design and is available as a Stamp Set, Sheet Set, limited edition Presentation Pack (1100) and a limited edition First Day Cover (1500). All products including detailed descriptions can be found by visiting www.iompost.com/buses.

Issue text author Richard Davis said: ‘This stamp issue marks the fourth and final set featuring the Island’s buses. As a transport enthusiast and historian (and occasional author) it has been a great pleasure to work on this series and I hope I have contributed in some small way to its success.’ He added ‘I have been delighted to see how the images I have provided have been brought to life in the fantastic paintings created by the very talented artist Peter Hearsey and transformed into some truly impressive stamps by the Isle of Man Post Office team.’

Artist Peter Hearsey said: ‘When in 1998 I was commissioned to illustrate a set of stamps featuring the early years of buses in the Isle of Man I couldn’t have begun to imagine that 24 years later, Buses part 4 would be issued! In the intervening years I’ve illustrated subjects for stamps as diverse as International Ploughing to Arctic Exploration and Model T Ford’s.’ He continued ‘Working with Richard Davis on the recent Bus issues has been a pleasure, and I’ve learnt a lot from his expert knowledge on the subject. As usual the team at the Philatelic Bureau have been very easy to work with and I am very happy with the way the stamps have turned out!'

Maxine Cannon, General Manager Stamps & Coins IOMPO said: ‘We would like to thank Richard Davis and Peter Hearsey for all their hard work on this magnificent set of stamps and therefore completing this successful series that has been part of our portfolio these past 23 years. What a befitting conclusion indeed. We also would like to thank the Department of Infrastructure and Isle of Man Transport for their support and invaluable knowledge during the creation of this series.’

For more information, or to pre-order the stamps visit www.iompost.com/buses.