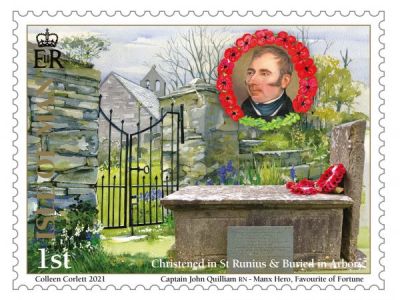 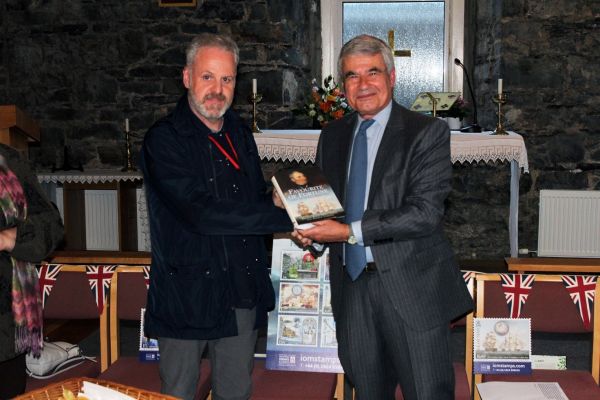 On Wednesday 29th September, Captain John Quilliam, the famed Manx Naval hero was the subject of a double celebration at St Mary’s On The Harbour Church. To mark his life and career the Isle of Man Post Office and The Quilliam Group joined together to launch two important memorials to Quilliam’s life and successes.

The Isle of Man Post Office have issued a splendid commemorative issue of six stamps by the highly talented local artist Colleen Corlett, which vividly illustrates six outstanding episodes from Quilliam’s life at sea, and later back ashore in the Isle of Man in public service as an M.H.K.

Maxine Cannon, the General Manager of Isle of Man Stamps and Coins officially launched the Stamp Issue saying “It is a great honour for us to again mark the memory of John Quilliam who is widely acknowledged as the foremost Manx Naval Officer. After volunteering for service in the Royal Navy and serving as an able seaman, he rose on merit through the ranks to command a number of frigates as well as most famously serving with distinction in H.M.S. VICTORY under Nelson at Trafalgar. We are proud to represent Quilliam’s story through these stamps, sharing his tale with our customers worldwide. His name and legacy continues to travel the world, only this time by mail!”

The second memorial to Quilliam was announced by Dr Phil Smith, Chairman of The Quilliam Group. “For many years it has been our Group’s aim to have a seminal work about the life, service and legacies of John Quilliam.  We were most fortunate in having well-known historians Frank Cowin, Andrew Bond and Professor Andrew Lambert working in collaboration to produce such a book.  Titled ‘Favourite of Fortune’ a description penned in Marshall’s Royal Naval Biography of 1832, it tells the story of Quilliam’s career. Professor Lambert rightly notes that most naval officers careers of that time were shaped by patronage but Quilliam – like Captain Thomas Hardy, the Captain of VICTORY at Trafalgar – were exceptional in being examples of merit rewarded.

The Quilliam Group – with generous financial support by Hamish Ross and Robin Crellin – are pleased to fund the publication of this book which we are confident will bring awareness of the Isle of Man’s greatest naval hero to a far wider audience.”

Rev Irene Cowell, Vicar of Arbory & Castletown who kindly hosted the double launch in St Mary’s on the Harbour Church concluded “ It is a great honour to host this event which reflects the affection, appreciation and relevance that John Quilliam still exerts today. His example of service in both the Royal Navy and Manx public office remains an example for us all.”