All Aboard for a Big Adventure! Thomas the Tank Engine and Friends Featuring on Christmas Stamps 2021

All Aboard for a Big Adventure!

Thomas the Tank Engine and Friends Featuring on Christmas Stamps 2021 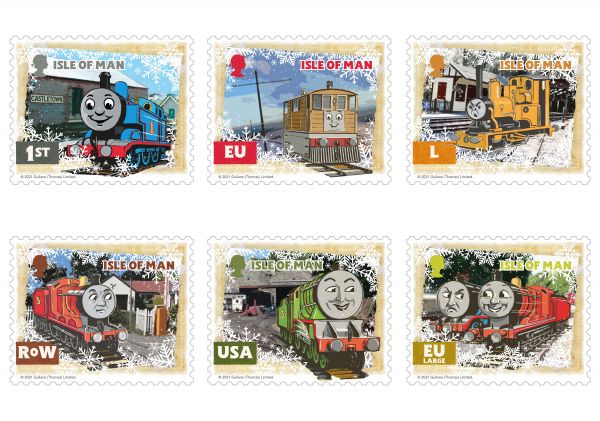 Isle of Man Post Office presents festive cheer in the form of six jolly seasonal railway stamps. The set features Thomas the Tank Engine and Friends wintering on the Isle of Man while celebrating all the fun of Christmas railway excursions in the beautiful scenery that typifies the Islands world-famous transport heritage network.

One of the most successful and widely-known characters in children’s literature, Thomas the Tank Engine is universally-recognised and much-loved by readers of all ages. He first appeared in his own volume in 1946, the second of the Reverend Wilbert Awdry’s books in the series, making this year the 75th anniversary of publication. The stamps pay tribute to the earliest era of Thomas artworks and have been created by local designer Emma Cooke with imagery derived from the work of Reginald Payne and Reginald Dalby.

Many of the featured locations selected for the stamps can be seen along the Douglas to Port Erin railway line, which today remains fully operational and in use by steam locomotives. The hillside-view stamp, featuring Toby, incorporates the landscape that is home to the Snaefell Mountain Railway, a seasonal service operated under the management of the Isle of Man Government. Meanwhile, Duncan’s stamp is set at the picturesque Groudle Glen Railway which is operated by volunteers and located along the coast a couple of miles north of Douglas.

The Isle of Man, with its long history of heritage transport - and steam railways in particular - has strong links to the Thomas series and the author openly credited the Isle of Man as inspiration for the Island of Sodor, the setting for his stories in reference to the Manx ecclesiastical diocese of Sodor and Mann.

Collectors may recall that in 1995, the Isle of Man Post Office released a set of six Thomas the Tank Engine stamps in which Thomas dreamt that he visited his friend, Caledonia on the Isle of Man.

Five years later the Island was one of the locations for the feature film Thomas and the Magic Railroad when Castletown Station transformed into Shining Time Station and the goods shed at Port Erin became the character Burnett Stone's workshop, so the Thomas stories have certainly found their place in Isle of Man and remain very fondly and inextricably linked.

The collection is available as a Set, Sheet Set, Presentation Pack and First Day Cover. The stamps will also be available as variable value self-adhesives (VVD). These will be vended via our retail kiosks, post office counter network and via hand-held vending machines at one-off events such as stamp exhibitions. For further information, please visit www.iompost.com/thomas.