Harbour Lights – Minor Lighthouses of the Isle of Man 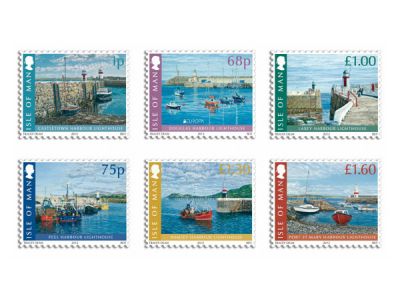 The Isle of Man Post Office is pleased to present Harbour Lights, a set of six stamps depicting minor lighthouses around the Isle of Man.

We commissioned local artist Tracey Dean to prepare new paintings which truly capture the elegance of these familiar landmarks. Tracey recently exhibited these works alongside many others in her solo exhibition of paintings at the Sayle Gallery in Douglas. A filmed interview by Paul Moulton can be seen here.

Local historian Stan Basnett writes: The principal Lighthouses around the Isle of Man are maintained by the Commissioners of Northern Lights and are not the only lighthouses around the Island. Each harbour being protected by minor lights erected on the extremities of piers and breakwaters many of which are also being fitted with an audible device such as a horn or bell for use in fog.

When built their purpose was vital to vessels entering harbour at night or in restricted visibility. Their importance has since diminished through the use of modern equipment such as radar and GPS. They still however have a useful part to play as an aid to navigation. Prior to the Revestment Act of 1765 the responsibility for the Island's harbours lay with the Duke of Atholl and the Island's Government. After that date the harbours came under the control of the Admiralty and the Crown.

Ultimately they reverted to the Isle of Man Harbour Commissioners and still remain the responsibility of the Manx Government through the Department of Infrastructure.

Please visit our website here to find out more about our stamps and products.