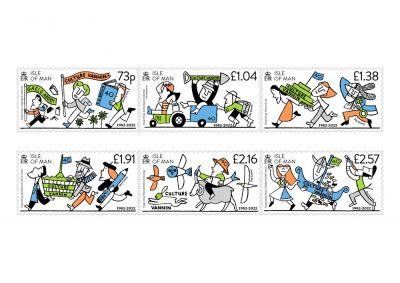 Isle of Man Post office is proud to present this set of six stamps designed by Jay Cover in commemoration of Culture Vannin’s 40th Anniversary.

This stamp issue celebrates the substantial and proud history of Culture Vannin’s support and promotion of Manx Culture and the Arts. Their work has been paramount in the revival of the Manx language and culture, working closely with up and coming and established artists in the past 40 years.

The six stamps represent the six core pillars of Manx culture, superbly illustrated by Manx-born artist Jay Cover entailing archaeology, industrial development, architecture, arts and crafts, history and law, language and literature, music, folk-lore and folk-dance. The visual concept of the issue is to portray Culture Vannin carrying the Island’s culture and history to the population of the Isle of Man and the wider world, hence the movement of those depicted in the artworks.

Commenting on the stamps, Culture Vannin said: “The team at the IOM Post Office is one of the hidden gems of the Isle of Man – their knowledge, expertise and support in showcasing a sense of Manxness nationally and internationally is second to none. We have enjoyed every minute of working with them, and with the designer, Jay Cover, who understands the role of culture in building a sense of identity and place, and whose wonderful illustrations have managed to capture all aspects of the wide remit of Culture Vannin. We hope that everyone enjoys the sense of movement and joy which is at the heart of a living culture made accessible and relevant to everyone.”

Jay Cover, artist and stamp designer said: “I’m delighted to continue my work with Isle of Man Post Office, especially being invited to help celebrate and commemorate Culture Vannin’s 40th anniversary. I’ve had the pleasure of working with Culture Vannin on a couple of projects and I’m continuously inspired by their output and dedication to maintaining Manx culture. In keeping with the nature of the organisation and what Culture Vannin and Isle of Man Stamps & Coins represent, creating this stamp set felt like a ritual in itself, an opportunity to visualise Manx culture, to stamp it onto paper and send the message, along with your package on a journey to inform people about
the nature of being Manx.”

Maxine Cannon, General Manager Stamps & Coins IOMPO said: “It was an honour to be able to continue our strong relationship with Culture Vannin in producing this collection of six stamps. This set, charmingly illustrated by Jay Cover, shows how important Culture Vannin’s contribution and efforts have been in helping Manx culture thrive.”

The collection will be issued on 4 th July 2022 and is available as a Stamp Set, Sheet Set, Presentation Pack and First Day Cover. All products including detailed descriptions can be found by visiting www.iompost.com/CultureVannin.

To further spotlight the collection and Culture Vannin’s 40th anniversary, an exhibition exploring Jay Cover’s journey and the process of creating the stamps will be open to the public at Culture Vannin Headquarters, St John’s from 5th July, Tynwald Day, until September 2022 (excluding bank holidays with the exception of Tynwald Day). For more information or to get in touch visit https://culturevannin.im/visitus/.