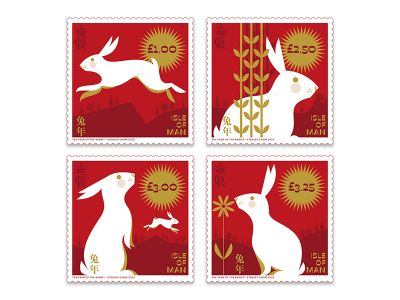 The Rabbit is the fourth animal sign in the Chinese zodiac cycle. The 12 zodiac animals are the Longtail, Ox, Tiger, Rabbit, Dragon, Snake, Horse, Goat, Monkey, Rooster, Dog and Pig. Each year has an animal sign according to the 12-year-cycle and holds a special place in ancient Chinese cultural heritage. Famous celebrity Rabbits include Albert Einstein, Whitney Houston, Roger Moore and Orson Welles. The Rabbit is most compatible with the Goat, Dog and Pig and least compatible with the Longtail and Rooster.

IOMPO has worked alongside artist Stanley Chow, who was born in Manchester to parents who emigrated from Hong Kong. Chow is a well-established artist and illustrator who has worked with a list of internationally recognised brands such as Manchester United, McDonald's, Lego and Ed Sheeran. He is also a regular contributor to The New Yorker magazine and has produced artwork for The New York Times Magazine.

Designer Stanley Chow said: "I’m so pleased to have ‘illustrating a set of stamps’ ticked off on my bucket list. It has always been something I’d wanted to do ever since I started illustrating. Doing this set was extra special as it celebrates my heritage… My parents would have been so proud!"

Isle of Man Stamps and Coins General Manager, Maxine Cannon said: “We are delighted with the designs Stanley has created for our stamps. His unique style perfectly reflects the characteristics that the rabbit signifies: forgiveness, grace and beauty.”