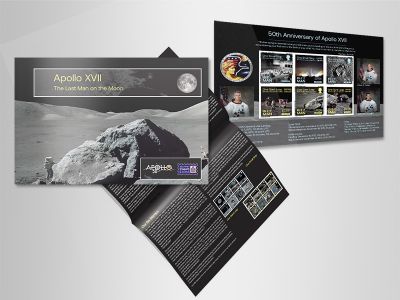 Isle of Man Post Office (IOMPO) is delighted to release their latest commemorative stamp issue, celebrating the 50th anniversary of the launch of Apollo XVII, the sixth and final mission in which man explored the lunar surface. The mission launched from the Kennedy Space Flight Center on December 7, 1972; at 07:33 GMT.

This commemorative issue also coincides with the Artemis 1 mission heading back from the Moon and if successful it will hopefully lead to humans returning to the Moon in the next few years, following in the footsteps of Apollo XVII Commander Gene Cernan and Lunar Module Pilot Jack Schmidt’s walks upon the Moon.

At the conclusion of their final moonwalk on 14th December 1972, Commander Cernan stated:

As I take man’s last step from the surface, back home for some time to come – but we believe not too long into the future – I’d like to just say what I believe history will record: that America’s challenge of today has forged man’s destiny of tomorrow. And, as we leave the moon at Taurus-Littrow, we leave as we came and, God willing, as we shall return, with peace and hope for all mankind.

When we created the original set of Moon Landings stamps and launched them at Mission Control in Houston, we met with George Abbey, who was integral to the Apollo Missions and many of the other Apollo astronauts. Their inspiring stories helped shape the second set of stamps featuring Apollo XVII. As we watch the stunning images from the Artemis mission arrive, we celebrate the achievements of the last men on the Moon and look forward to humans going back to the Moon and on to Mars.

With the Artemis1 mission currently on the way back to Earth from the Moon, the 50th anniversary of the launch of Apollo XVII is a fantastic opportunity to reflect on the legacy of the Apollo Missions and the passing of the torch to Artemis. In a few short years, we will return, and witness the first woman and person of colour follow in the footsteps of Apollo, and lead the way for humanity in space with peace and hope for all mankind.

Issued on 7th December 2022, this limited-edition special commemorative sheetlet is available for purchase with free delivery across the world and can be placed through the Isle of Man Post Office website, by postal order, or telephone (+44 1624 698430).

The full range of products commemorating key Apollo milestones can be viewed at iompost.com/Space